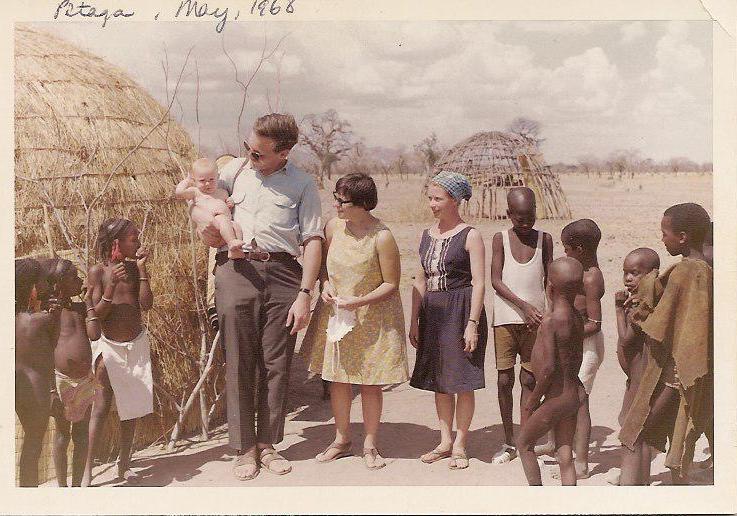 Almost fifty years ago, I (Carolyn) stepped out of an Air France jet, infant daughter in my arms, into the dust and heat of West Africa and the joyful embrace of my young physician husband. We were in Upper Volta, now Burkina Faso, where Eli was the doctor for the first Peace Corps group in a country many of us had never heard of, with a capital, Ouagadougou, whose name I had yet to learn how to pronounce.

We absorbed many lessons during our two years in Burkina Faso, but perhaps the most fundamental was our coming to recognize how much of what we thought to be truths about people and relationships were cultural rather than universal. For example, public and private were more fluid. If our daughter cried in a public place, nearby women made sure that I put her to my breast right away, or held out their arms to hold and comfort her. The village surrounded us.

We arrived believing that if we earned something, we owned it. But for our Burkinabe friends and neighbors, what they earned was part of a shared community, and not just of the living, but nearly always with an acknowledgment of ancestral spirits as well. Here we make advance plans for dinners with friends, and are uncomfortable if conversation lags. In Burkina Faso (or Cameroon, where our son-in-law comes from), people drop by, share food from the common pot, and enjoy both talk and comfortable silence.

Few Americans have such an opportunity to live in a far corner of the globe, but through art, our beliefs and assumptions can be stretched as well. During the course of this 2016 season, the Jacob’s Pillow Dance Festival has brought performances originating from countries as disparate as Korea, Argentina, Algeria, and, to our particular delight, Burkina Faso, with the presentation of Bessie Award winning dancer, Souleymane Badolo and his company.

The audience entered the Doris Duke Theater to a dark stage with a folded blanket in the center, set with round golden calabashes, and exquisitely spot lit through a larger calabash inverted in a hanging rope net.

The calabash is an inescapable tool of traditional African village life. Made from dried gourds, calabashes form sturdy containers in many sizes used for the myriad purposes the African ingenuity can devise. They are receptacles for drinking, eating, bathing, winnowing, and collecting. They provide surfaces to be painted or carved. They form resonators for marimbas and harps.

For Souleymane Badolo the calabashes are drums, under the brilliant hands of master Burkinabe percussionist, Mamadou Konate.

Once the audience was seated, the lights dimmed to total darkness and silence. One sensed the presence of a form on the blanket. The stage was still, except for the visual rhythm of the white outline of a large triangle on the black floor pointing to the rear, transected by a smaller triangle in the near center corner. Is this an arrow? Is it pointing outward?

The silence continued. The audience hushed. The Doris Duke Theater was enveloped in profound quiet for many minutes. Then slowly, slowly a leg, then an arm emerged from the shadowy back corner of the stage. Still in silence, a man in Western garb stretched into the stage, like a moth emerging from a pupa, slowly moving his body, testing that it moved, exploring how it could move, as it gradually entered into the dim light.

The silence was finally broken by one click, then another, and another. As the clicks accelerated, rising lights fell on the drummer, building repeated patterns into syncopating rhythms on his calabashes, while the dancer, Sylvestre Koffitse Akakpo-Adzaku (from Togo), twisted and writhed into the space.

A second figure emerged from the shadows. Souleymane “Solo” Badolo in traditional embroidered African attire sinuously twined his movements into those of Mr. Akakpo-Adzaku.

Thus began “Yimbégré,” a dialogue of connection and opposition between the old and the new, the traditional and the modern. Through the course of the dance, the old and the new challenged and confronted each other with sounds and movement.

The virtuosic drumming of Mamadou Konate on gourds and talking drum anchored the sounds. (The talking drum is a narrow-waisted calabash or wood column with animal skin drumheads on either end secured and connected by strings. The drum is held to the body under one arm while struck with a wood mallet by the opposite hand. Squeezing and releasing the arm tightens and loosens the strings holding the drum heads to the columnar body, creating pitches, or the “talking” of the drum.)

Mamadou Konate introduced the commentary of the talking drum gradually and expressively. Only after laying down a pattern of layered syncopations on the calabashes did he pick up the instrument, while lying casually on his side, his elbow on the floor. After just a few taps with his drumstick, there was silence, as first one dancer, then the other, stepped, leaped, leaned on one another’s shoulders and collided, back to back.

Konate’s drum’s tones provided the kind of vocal narrative that one might hear at an Olympic sporting event, with the pace, volume, and cross-rhythms alternately intensifying and slackening as they tracked the excited interactions of the dancers.

Mr. Konate’s program biography notes that he descends from gifted griots, or oral historians and storytellers, and he has an “ability to ‘feel’ and communicate the old stories and histories of ancient West Africa through his drums and music.” We certainly felt that communication as we were transported back to our many hours and days immersed in the music and stories of Burkina Faso. In “Yimbégré,” Mr. Konate’s percussion created a foundation of traditional rhythm under the dialectic tension of the dance. “Yimbégré,” means “rooting place,” and like a heartbeat, the drumming rooted the dance in its ancestral beginnings.

The story of the dance, however, is about pulling away from those beginnings, the pull from within to stay and from without to go, and finding a language to communicate these essential African realities with the outside world. Throughout the dance, Mr. Badolo and Mr. Akakpo-Adzaku spoke, intoned, shouted and chanted the languages of the village, of the colonial owners, and of the African diaspora, to our ears, a veritable history of African experience. They chattered at each other like quarreling birds, some intelligible to the audience’s ears, most not.

These sounds and words accompanied a stunning palette of improvised, traditional African, and modern movement. At times fluid and harmonic, at times jagged and dissonant, the dancers powerfully conveyed the pull of home and tradition, in struggle with the modern and its changing understandings of gender, sexuality, and one’s role in the world.

Total silences punctuated the developing drama, which included gestural and athletic metaphors of domination, submission, affection, rejection, and gorgeously coordinated collaboration. Splendid displays of strength, flexibility, and balance gave balletic emphasis to the emotional power of the music, and of its absence. Alternating the percussive excitement with silences brought opportunities to consider what just transpired and what was to follow, or just to enjoy the tranquility of the African night.

As the dance unfolded, astounding displays of athleticism and musical engagement brought gasps of admiration from the audience: e.g. the brilliant, extended carry of Mr. Badolo on Mr. Akakpo-Adzaku’s left shoulder; and the two dancers’ joint cartwheels leaping back and forth across the stage.

Notable in Yimbégré was the fluidity of the performers’ roles. Not only did the dancers contribute to the soundscape, the drummer entered the movement. In one tightly choreographed conversation in sound and movement, Akakpo-Adzuku approached Konate in silence, then both moved to the front of the stage with Badolo, where drummer and dancers produced a slinky, geometric frame to a drummed, melodic riff that proceeded rapidly upward: 1, 2, 3, 4, 5 rest, repeat, repeat. This powerful and beautiful presentation raised profound questions about both the value of the traditional, and the possibilities of entering into the modern world.

To learn more about Souleymane Badolo and Yimbégré, we invite you to watch this informative, August 25, 2016, conversation between Souleymane Badolo and Jacob’s Pillow Scholar-in-Residence, Brian Schaefer. It gives insight about the backstory and choreography of “Yimbégré,” and includes some marvelous footage of the dance.

We left this performance full of memories of Africa and of the shock of our return to the United States. As we settled in Boston with our then two-year old daughter, we missed the quiet amid layers of sound and busy-ness, the market stalls as we confronted shelves of endless choices at supermarkets as large as a small village, the caring of strangers, and the clarity of using one gadget for many purposes, rather than a different gadget for each purpose.

Driving home from the Pillow, we reflected on our own roots, including those we laid down in Africa, the ways that we are pulled from them, and how we can sustain their truths within the complexity of our own modern realities. This is the beauty of art, and of Souleymane Badolo’s provocative evening of dance.