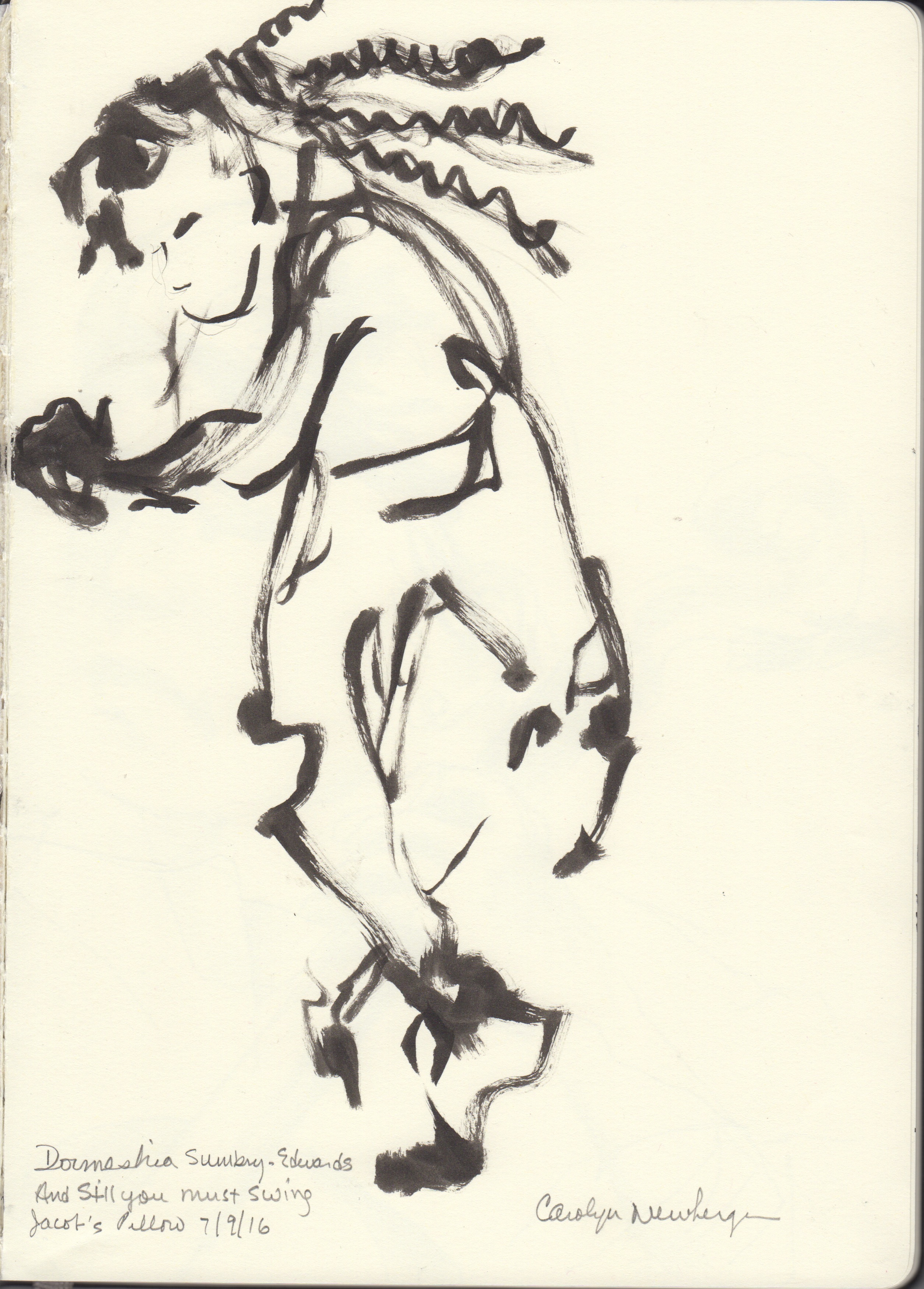 Becket — The World Premiere of And Still You Must Swing summoned the deep history of the art form of tap dancing with affection and devastating syncopation. The one-hour show, which provoked a continuous full-throated audience response, was led by the renowned choreographer and dancer, Dormeshia Sumbry-Edwards, and starred three brilliant improvisers, Jason Samuels Smith, Derick K. Grant, and Camille A. Brown, along with a hard-swinging quartet of jazz masters composed of drummer-arranger Allison Miller, pianist Carmen Staaf, stand-up and electric bass, Alex Hernandez, and African djembe drummer, Gabriel Roxbury. Echoes of the greats sounded through, telegraphing respect not only to the tappers of old and the key jazzers of then, but also the visionaries of now.

Speaking of now (we must), this performance took place at the end of a tragic week of American community violence with powerful racial undertones.

Siobhan Burke of the New York Times reported Sumbry-Edwards’s spontaneous and heartfelt reflection on these events two days prior to this Saturday afternoon performance in a piece entitled Mourning in Tap Shoes at Jacob’s Pillow:

“Dormeshia Sumbry-Edwards paced restlessly, rubbing her palms together. The jazz trio had stopped playing. She seemed uncertain of her next move.

“It’s not easy when your people are getting killed in the street,” she said into the silence, holding back tears. “I can’t apologize because it’s real, y’all.”

Ms. Sumbry-Edwards, the prodigious tap dancer and choreographer, was addressing the audience at Jacob’s Pillow Dance Festival here on Thursday. She was about 20 minutes into “And Still You Must Swing,” a collaboration with her fellow tap stars Derick K. Grant and Jason Samuels Smith, and the guest artist Camille A. Brown. News of the latest killings of black men by police officers — Alton Sterling in Louisiana, Philando Castile in Minnesota — was less than 48 hours old. (The deadly shootings in Dallas happened later that night.)

Yet tap — born from slavery and inherently a mode of resistance, even when it may appear otherwise — offers a way forward. On a different night, “And Still You Must Swing” might have been pure revelry, bringing nothing but delight in the dialogue between the music of the feet and the live band. On Thursday, the stage became a space for mourning, but not at the expense of joy. Tap, as embodied by this ensemble, can hold it all. . .

Words were sometimes needed. “I love you, Lulu,” Mr. Grant said, as he raised one fist in the air.

“I love you, too, Daddy!” his daughter shouted back from the audience.

After her moments of silence, Ms. Sumbry-Edwards found her way through a quietly seething solo, her gaze pointed downward or inward. But she wasn’t alone. When Mr. Grant and Mr. Samuels Smith returned to the stage, so did her smile.” (New York Times, July 8, 2016, p. C2)

On the stage, Dormeshia Sumbry-Edwards is a deeply emotional presence, totally attuned to the shifting moods of the music and the creative opportunities for her colleagues to seize. How rare it is to see a star so subordinate her stage presence and talents and simply watch with admiration as her ideas unfold in the sinews and shoes of her colleagues. And not only with these sublimely gifted dancers. Equally with the musicians, stars in their own rights.

The drummer and arranger, Allison Miller, is a total delight to watch and listen to in live performance. She radiates love in what she’s doing, and what she’s doing is extraordinary. Most importantly, perhaps, in this context, she’s attuned to every nuance and gesture of the dancers, responding with twinkles on the cymbals, roars on the snares, and thundering tom-toms when required, but soft whispers when quiet reflection becomes the mood.

The vital role of keeping the show swinging falls naturally to Miller. She could swing the pants off a tapper with just a cymbal rhythm, but she didn’t lose an opportunity to launch these masters into a stratosphere of syncopations. Layer on layer lifted the audience to tap their toes, clap their hands, and grin along with Miller.

The gifted pianist, Carmen Staaf, is blessed with terrific timing, powerful technique, and a unique capacity to swing complex melodic and harmonic ideas. Much of her oeuvre in this performance was in the middle stream of contemporary modernism, but when she got down to the guts of tap history toward the end of the show, she unfurled a gorgeous sequence of classic gems in classical style, pointing out the highlights of jazz history from Harlem stride progenitor James P. Johnson’s “The Charleston;” to Duke Ellington’s and Juan Tizol’s standard platform for improvisation “Caravan,” as well as Ellington’s “It Don’t Mean a Thing if It Ain’t Got That Swing,” (a long and satisfying exploration of the rhythmic implications of its melody and harmonic changes), and the romantic “In a Sentimental Mood;” to Ray Noble’s fast “Cherokee,” on whose recording the alto sax legend, Charlie Parker, jump-started the era of bebop (“I found that by using the higher intervals of a chord as a melody line and backing them with appropriately related changes, I could play the thing I’d been hearing.”) The dancers responded with alacrity and delight to Staaf’s extravagant, bouncing left hand and her showers of runs and chords in the right, and vice versa.

Bass man, Alex Hernandez, was a bit over-amplified, so one couldn’t miss the subtlety and sensitivity of his contemplative reflections in duos with single dancers. His one extended solo was a kaleidoscopic masterpiece of creative virtuosity. He makes the bass talk as well as swing.

Djembe player, Gabriel Roxbury, previously vaulted his African instrument to a cross-cultural consummation in a duet with Tony Award Winner Brian Stokes Mitchell (from the recent Broadway revival of Eubie Blake’s and Noble Sissle’s musical, “Shuffle Along”) and with the New York Philharmonic in a concert at Lincoln Center. This afternoon, he served a vital supportive role, adding additional layers of syncopation and occasional well-placed showers of beat, to the dancers’ soles and heels and his fellow musicians’ driving propulsion.

Jason Samuels Smith, who dances as if he carries in his head and shoes the entire legacy of the genre, also slides with extraordinary grace. His magnificent, authoritative stage presence, vivid rhythmic imagination, and collaborative spirit were richly in evidence here. In the past, they have brought him numerous distinctions (an Emmy, a Dance Magazine award, an American Choreography Award, a Joyce Foundation grant, and a “Bessie” recognition from New York Dance and Performance.

Smith’s remarkable sliding technique brought instantly to mind in the eyes of these observers the work of the Slide Brothers, Jimmy Slyde and Jimmy Mitchell. One of your reviewers (guess who!) took private tap lessons with Mitchell and recognized immediately Smith’s channeling the work the masters.

Jimmy Slyde was honored in an evening at the White House during the first Clinton administration. Here he is, in fabulous form, years after the debut of their partnership, introduced by the dancer and historian, Savion Glover.

Dancer and choreographer Derick K. Grant appeared with Savion Glover on Broadway and in the touring company of the groundbreaking show, Bring in ‘da Noise, Bring in ‘da Funk. We took in the original and, at the Pillow, the touring version.

Each used to tremendous effect a resonant stage floor and brilliant, vivid lighting. The influence of that explosive, percussive, show was felt here as well. The dancers performed on large sounding boards – two circular in the rear and one rectangular in the front. These amplified the impacts and subtleties of the tap, and bright green, pink, and orange squares carried the spirit into the visual realm.

Grant’s dancing has won impressive acknowledgments, too: a “Bessie” for choreography of The Blues Project, a Princess Grace and Helen Hayes award, Lester Horton Dance Award, and a Best Ensemble Performance Award.

Apropos of the latter, he was the very model of a collaborative spirit, both in the over-the-top duos with Smith, and trios and quartets with Sumbry-Edwards and Camille A. Brown, some of which appeared choreographed to evoke the great original tap ensembles, e.g. the Nicholas Brothers and the Berry Brothers.

As a soloist Grant, in golden shoes, took flight with dazzling leaps, stunning rattles of heels, and tip-of-the-toe tapping with spectacular rhythmic coherency.

In her inspired dancing – in sneakers! – Camille A. Brown held forth with deliciously acrobatic and deeply felt solos and as a responsive partner to Smith and Grant, both individually and together. There was knowing irony and humor in her flirtations, rejections, come-ons, and send-ups of men who’ve crossed her path, and an ineffable and affecting yearning in her quiet moments, including in her important role as an observing witness.

In her gloriously sexy physicality, in jumps, arches, and courageous postural exhortations, up to prancing, and down to showing off her exquisite bottom half, this petite dancer mixed athleticism and sensuousness into an amazing personal brew. She was WOMAN, the un-Kardashian, the un-Helen Gurley Brown.

Brown’s many awards are also listed in the program notes (The 2016 Jacob’s Pillow Dance Award; three Princess Grace Awards, for choreography, for Works in Progress, and a Statue Award; a 2016 Guggenheim fellowship; a 2015 TED fellowship, and a 2015 Doris Duke Artists Award. The notes include along this provocative assertion: “She is a prolific choreographer making a personal claim on history through the lens of a modern Black female perspective and leads her dancers through excavations of ancestral stories, both timeless and traditional, that connect history with contemporary culture.”

This was one of those performances where the build-up and credentials were relevant but inessential. The moving beauty of such honest and heartfelt dance surely justifies the credits, but in real time, what the artists express is what mattered most. Illuminating a vital dance tradition with their indelible personal stamps with such love and insight, and providing the audience with the gift of unalloyed exultation gives hope for art as a healing force, just when we need it most.