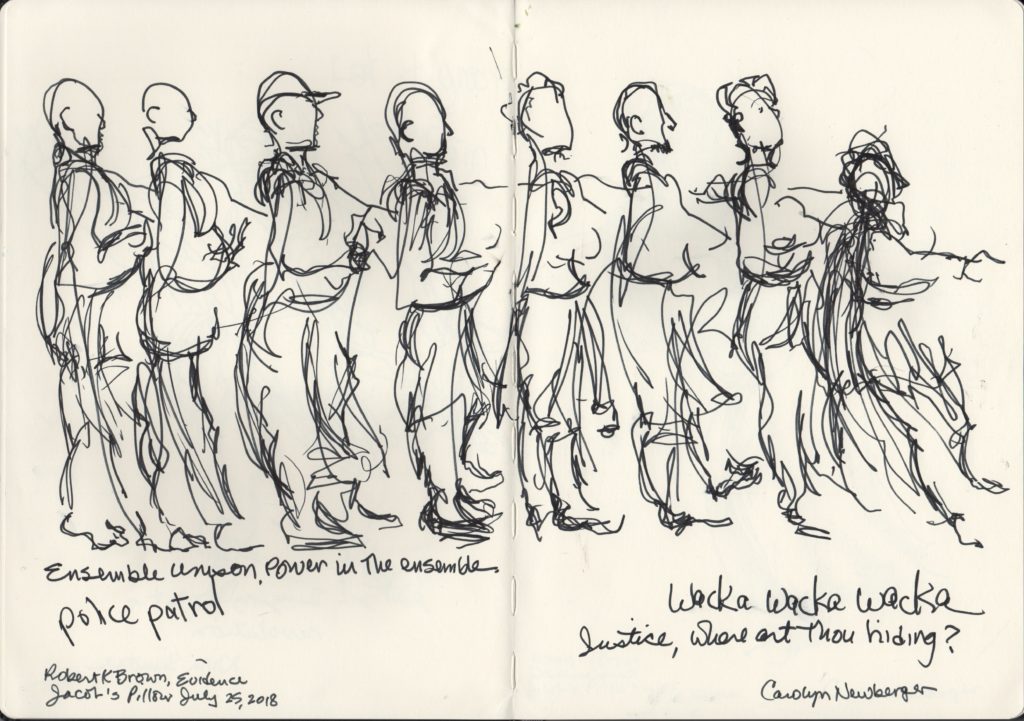 Becket — As the curtain goes up in the darkened Ted Shawn Theater at Jacob’s Pillow, we see six figures silhouetted across the rear of the stage. Slowly one figure moves into the dance, then another, each joining those already in motion. Their costumes are simple and dark.

As each dancer joins in, both in contrast with each other and in synchrony, one witnesses sublime technique in a gorgeous array.

To these reviewers, “Come Ye” feels like a call to community, not only in the power of shared movement, but also in the unmistakable African roots in rhythmic pulse, fluid bends, parallel limb gestures, and the members of the ensemble both propelling and cheering one another’s solos. “Come Ye” revels in African celebration, both in the face of triumph and tragedy. Abandoned and restrained in keeping with the occasions and the shifting emotional contexts, African dance is inextricable with music.

We know well how dance commemorates the deepest spiritual and personal experiences: harvests, marriages, deaths, and the legends of abiding spirits, which locate man’s place in the cosmos. In the late 1960’s, after having asked for a West African assignment because of our interests in African art and the roots of American jazz, we brought our five-week-old daughter to our two years of Peace Corps service in Burkina Faso.

Then after her own four years in the Peace Corps in Cameroon, our daughter married her love, our fine son-in-law, in ceremonies both here and in Cameroon. Although we had little language in common with much of our son-in-law’s family, we spent days in dance, moving, laughing, hugging, and delighting together in our shared love of our children. We became connected in ways deeper than language, and dance surrounded the solemn ceremony in which the village imam bound their lives together, now for almost 25 years.

Ronald K. Brown is a renowned choreographer, who creates dance for companies and dancers around the world. While deeply steeped in African culture and history, his work also pays tribute to the more modern forebears that fought for equal rights and dignity. The latter part of “Come Ye” features the music of Nina Simone. The choreography includes projected portions of a documentary video by Robert Penn, a parade of powerful images depicting figures in the long fight for civil rights, including Marcus Garvey, Mahatma Gandhi, Martin Luther King, Jr., Mohammed Ali, Rosa Parks, and John Lewis; a fight which, needless to say, continues. 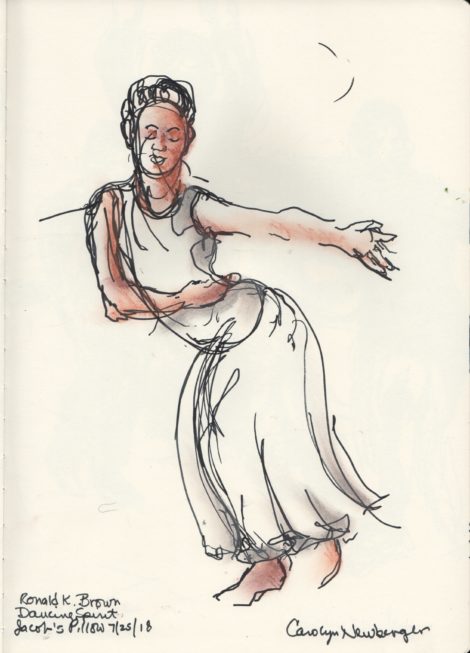 Originally commissioned for the Alvin Ailey Dance Theater in celebration of Judith Jamison, “Dancing Spirit” borrows the title of Ms. Jamison’s autobiography. Evoking Ms. Jamison’s beauty, majesty, and generosity, Ronald Brown can’t seem to exhaust the adjectives and superlatives to describe her. She is just that wonderful, as you can witness here:

Clad in Ms. Jamison’s signature white to music by Radiohead and War, the music and movements in these solo and ensemble excerpts are decidedly modern, muscular, and virtuosic, yet still contain hints of the dancers’ African roots that extend through the Afro-Caribbean and American diaspora. 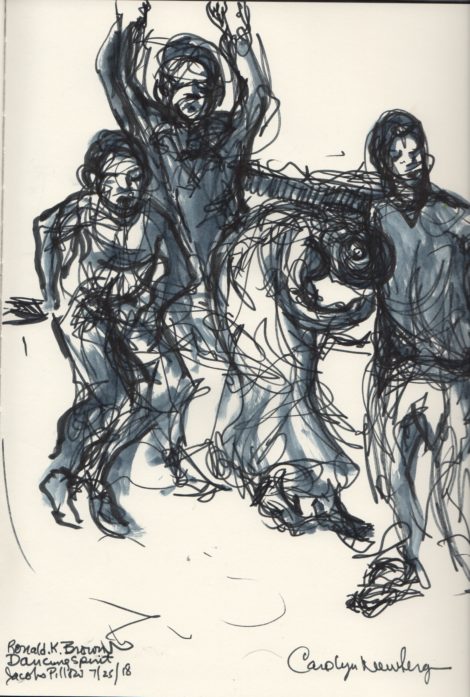 If dance and music move through a horizontal geography of time and space, Mr. Brown reminds us of its simultaneous verticality, of the layers of history that are always there, anchoring and enriching the present and providing the foundation for stretching into the broader aesthetic, social and emotional world. 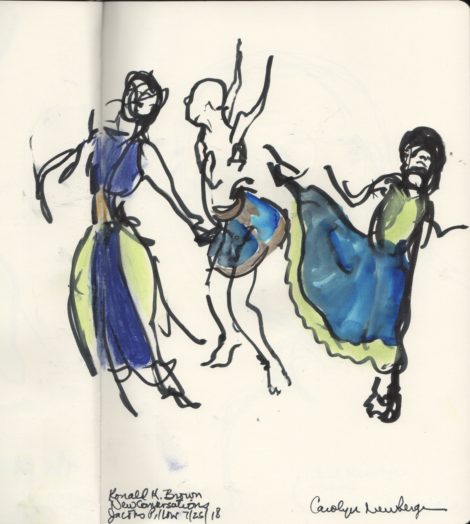 After an intermission, the program continues with the world premier of “New Conversations,” set to the exciting, propulsive – and live – jazz of Grammy Award winning Arturo O’Farrill. 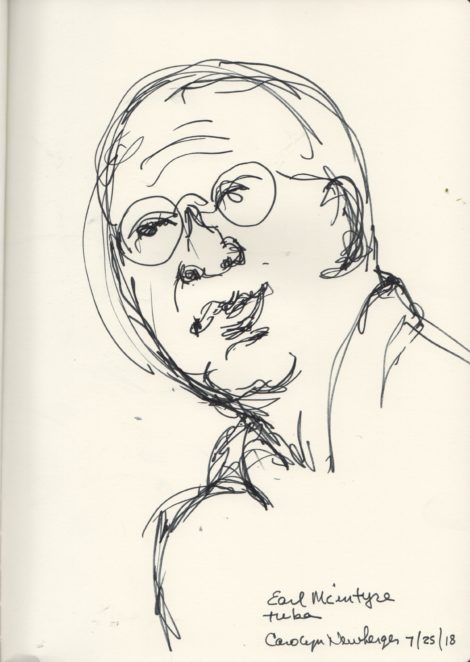 There are several conversations here. One is notably between the dancers and the irresistible drive of the band, including a knock-out tuba player, Earl Mcintyre who rocketed the music along in his instrument’s depths and channeling Charlie Parker and Dizzy Gillespie in dazzling flute/tuba unison lines in his soaring upper register. 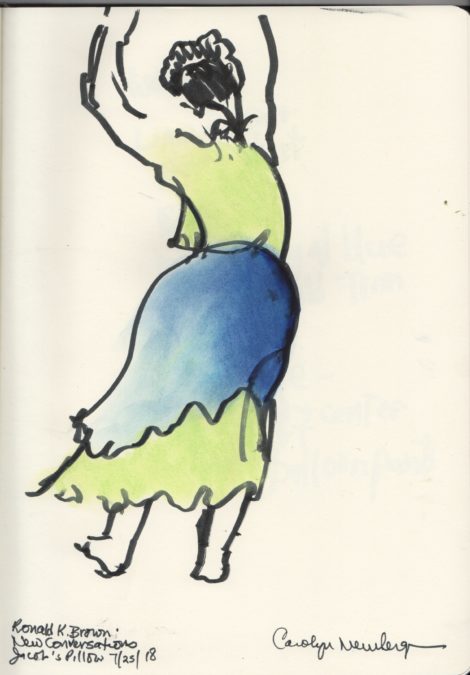 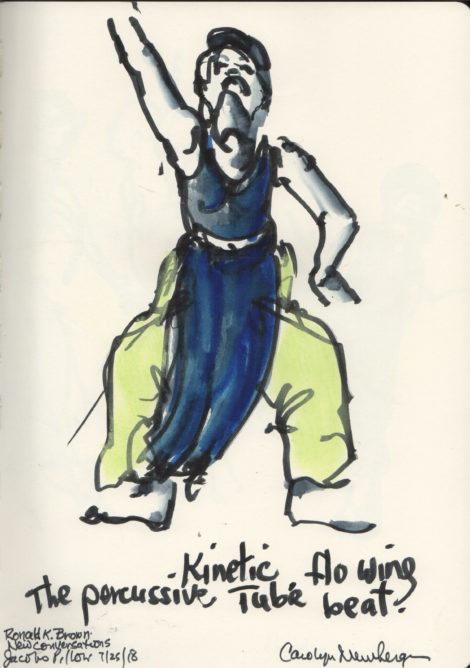 Another is between costumes that seem to be inspired by ancient Egypt and the geography and modernity of O’Farrill’s Latin-inflected jazz.  Shades of hip-hop, bebop, boogie-woogie, and New Orleans parade blasts, create devastatingly swinging backgrounds, lasting minutes, adorned by tuba swoops echoing the Dirty Dozen Brass Band, chattering tambourines, and arching hammerings of conga, timbales, and cymbals.

Here, too, was a conversation between dance and the struggles of today’s world. Ronald K. Brown asks questions about inclusion and exclusion, with movement that connects directly to Nina Simone’s vocals, and to images of black suppression and resistance. And at a more philosophical plane he asks: What is dance and who can dance it? What is history and who gets to write it? What can dance reveal and who decides what goes on its stage? Here was choreography imitating life, and vice versa.

Mr. Brown answers these questions with powerful and evocative movement set in a panoply of repeating, layered, irresistible rhythms. He brings the dance of the ancestors into creations of the present, and projects the struggles of the past into dancing bodies, as well as into our hearts.

Ronald K. Brown is performing at Jacob’s Pillow in Becket, Massachusetts through July 29. For tickets and information, consult the Berkshire Edge calendar.

— Joseph Brodsky
Read next: The 'complicated truth' about recycling and the plastic water-bottle ban