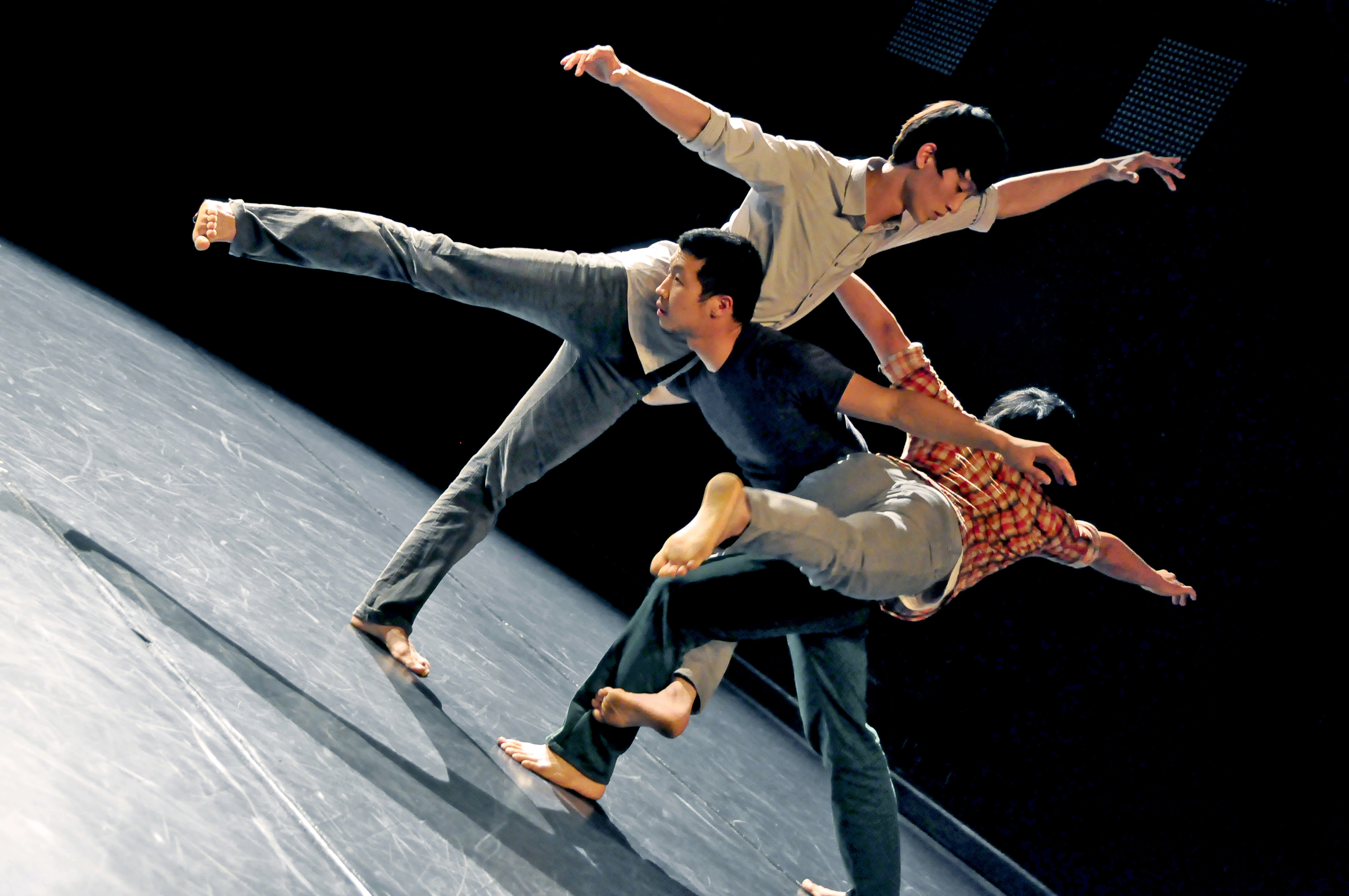 The Pillow’s deep tradition of respect for the role of athleticism in modern dance dates back to its origins; Ted Shawn brought in athletes from Springfield College to energize some of his founding productions. Maura Keefe, a Scholar in Residence who also directs the dance program at SUNY-Rockport, included this history in her excellent orientation to Bereishit’s approach to modern dance, both in her pre-performance talk and richly detailed program notes. The parallelism to the Jacob’s Pillow story is apt and striking.

“It is in this world of Korean traditions and pop dance, as well as global practices of hip hop, modern dance, and ballet, that Soon-ho Park circulates. He studied dance at Hansung University in Seoul, going on to complete a graduate degree there. Contemporary dance took on further layers of complexity when he went to Europe to continue his studies, participating in a course for choreographers at the European Dance Development Center in the Netherlands. He then worked with choreographers, dancers, musicians, visual and media artists from around Europe, cultivating a unique approach to contemporary Korean dance.” (Maura Keefe, 2016)

This company’s artists, Cheol-in Jeong and Jae-woo Jung, probed the meaning of creating a weapon and the personal ambiguities of separating warrior from victim in Park’s spellbinding opening work, BOW (2014). Jeong, Jung, and their colleagues, So-yeon Kim, Da-som Lee, and Ji-soo Ryu, are not only powerful and affecting soloists, but athletes possessed of extraordinary balance and skill. They derive both from dance traditions and also from judo, tae-kwon do and other Korean martial arts. The rigors of gymnastic floor work surely play formative influences as well.

Balance and Imbalance, the title alluding to ineluctable pulls of gravitational, biological, and social forces, comprised the second half of the program. Every second of both works drew one in. The evening went by in a flash, and one was left with indelible impressions of technical mastery and penetrating human insight.

The company takes it name from the words, “In the beginning,” the opening word of the Old Testament. They pronounce the Hebrew as “Breshet,” according to Dr. Keefe, and they study carefully the historical foundations and traditions underpinning their work:

“Park’s male duet BOW, a study of the traditional meditative artistry of archery . . . build(s) upon rigorous research of the sport … The two recreate the act of making and firing a bow, turning these actions into a confrontation with identity.”

A single, bare-chested, trousered dancer enters from stage left and, in silence, contemplates a long, carved stick of wood attached to a six-foot length of white twine, pauses, and gently tugs the twine around his arm and wrist. Instantly, his hand goes limp, as the spellbinding beginning of BOW evolves in complexity and symbolism in an exquisite evolution of twinings. Every body plane is encircled, divided, and each muscle is extended and flexed until he runs cord up his back and draws it effortlessly across the center of his scalp down to forehead, across his nose to his upper lip. Geometric forms slice across his pliant limbs and torso. The limpness portends the astounding courtship that follows.

The second, also trousered dancer enters, wearing a grey, long-sleeved jersey top and high, dark stockings, walks quickly to the first, and pulls the string downward from his nose. The first partially crumples, bending his chest forward and maintaining his bent position, while the duo begins an uneasy exploration of the possibilities of their literal connection and freighted collaboration. The first dancer places his foot on the end of the second’s sock. As the second withdraws it, it stretches to three feet before pulling free of his foot. Still encircled by the cord, the first dancer pulls on a sleeve of the second’s top, as they descend and ascend together, pulling the wood along into further defining and confining geometric frames.

The grey top, now draped like a shawl, becomes a straightjacket, as the first dancer pulls both arms of the second into one of its sleeves. The second breaks free, and the two shirtless dancers unfurl a series of mounts, carries, contortionate pulls, and micro- and macro-aggressions. These culminate frequently in limpness of one or another anatomic extremity of the seeming victim, culminating in one’s entirely limp body, as he is carried, half-encircling his perpetrator some 15 feet across the stage to the separated wood and its cord. The carrying figure leans down, still burdened by his victim, and reaches for the cord, pulling it up with the stick. Then, surprisingly, the limp victim comes to life, to help even as he is carried, reaching down with both hands to affix the cord to the other end of what suddenly becomes a bow.

What had been a kind of umbilical cord, pulling the characters prior to the deathly struggle that gives life to the weapon, now becomes the tensile energy storage device for the efficient pursuit of prey…and the symbolic center of the next powerful sequence.

Shortly before the carry, the loud, vivid sound of spiccato, on a cello, comes across the sound system. Bouncing off its strings, the wooden portion of its bow sets a teasing rhythm, which the dancers pick up briefly, moving together backward in an instant horseplay of Gangnam Style. But then, in seconds, the bow of the cello becomes the instrumental force of a building, repeated ostinato, a riff which at the outset features a dark double-stopped, three-chord harmonic sequence: E minor, C major, A minor, and back, again and again. This bow becomes weaponized as well!

The dance increases in intensity, and so does the music. A powerful, slow, 3/4 – time repeated, two-string rhythm rises in volume, and the dancers, after struggling for control of the bow, ultimately separate. One stands mute at the front of the stage, his bare back to the audience, opening his chest to the dancer bearing the bow in the center of the rear of the stage. Illuminated by a single spotlight as the whole stage dims, he slowly pulls the bowstring, pointing the figurative (absent) arrow over the head of his companion. The music comes crashing to a close, and stage goes black.

Obviously moved by the performance, the audience rose to its feet in acclaim of this astonishing and virtuosic exploration of the possibilities of the human body and the complexities of its spirit.

Balance and Imbalance also told an allusive story, featuring a narrator-singer-drummer who told a story, in Korean, in many vocal registers of both words and song. In the absence of translation, either in the program or in super-titles, it was impossible to interpret its meaning, although the symbolisms of the interactions between the male and female dancers were inescapable.

Once again, the physicality and virtuosity of the performances approached the unbelievable, with remarkably balanced and unbalanced individual, duo, and group leanings, carries, and synchronized movements, often defying but mostly utilizing gravity to pull and push lithe, pliant, and powerful bodies.

Three musicians sat in a row at stage right, the vocalist wearing a traditional Korean gown with a short white silk top and a bell-shaped, expansive pink floor-length skirt. To her left, a drummer wielded 2 softheaded batons, and occasionally doubled on a string of bells and on a brass cymbal that he both muted and pounded. An additional meditation gong served to create at one dreamy moment, a sustained high-pitched tone reminiscent of Benjamin Franklin’s glass harmonica or the dinner table annoyance of a teenager running his wetted index figure around the rim of a wine glass. The Bereishit drummer created this sound by rubbing the wooden baton of the mallet along the inside rim of his gong.

Fortunately, as this piece has been frequently performed, there is a fine video of a long passage that includes a simultaneous translation of the charming sequence when the vocalist leaves her drum and joins a bare-chested dancer displaying his torso in the center of the stage. Circling around him, she mocks his monkey-like posture and body (“You pump yourself full of air!”) then pushes him down.

Limp on his belly, she spanks his buttock and says, “Get up.” He stiffens and lifts both buttocks, to the delight of the audience. She spanks him again, and his hips fall back down. (Still more laughter.) But in a moment, after she rhythmically taps his back to the accompaniment of the drummers, he’s up again. But somber, restrained, and then, suddenly, transformed into an animalistic and fearsome atavism. She continues the story, describing a now-familiar metaphor. “The tiger. Its front legs like a quiver, its rear legs like a bow!”

An eloquent and emotionally-charged masterpiece of floor work follows, in which the man appears to connect to his forbears in the bestial kingdom, increasingly feral, impulsive, and seeking to dominate. He rises, tossing himself around the stage, adorning his animal prances with tumbles, flips, and handstands. Her vocal evocation of a storied and ferocious tiger completed, she retreats to the safety of the percussion section. 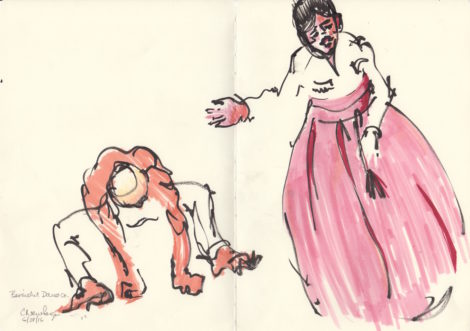 The drummers’ rhythms become more repetitive, as other dancers join the soloist. As the musical tension rises, several aggressive sequences pose male protagonists against female victims. Animals, these guys, but the women won’t and don’t take it.

Recognizable tropes include the women’s stiffening their bodies like boards, resisting the men’s shaking their torsos, heads, and necks, and assembling in sisterhood, the men’s struggles against one another, resonating to the beginning of the dance, in Stonehenge-like duos, trios, and quartet formations and both collaborative and obstructive carries. Primordial impulses overwhelm sex role conventions. Imbalance surmounts balance, but every action and reaction requires individual and social balance. Thus can the dance envelop the arc of human experience, from its beginning.

The ending sequence is devastatingly impressive, set to ever more intense repeated rhythms and punctuating shouts, the clatter of sticks against rims, dimming lights, and the use of spotlights to emphasize the dancers’ torsos and faces. In one fearful assemblage, the entire company lines up in a row and slowly approaches the audience bearing hateful expression and martial coordination, summoning an effect reminiscent of the unforgettable choreographed march by the chanting asylum inmates in the 1965 Broadway production of Peter Weiss’s play, “Marat/Sade” (The Persecution and Assassination of Jean-Paul Marat as Performed by the Inmates of the Asylum of Charenton Under the Direction of the Marquis de Sade)

The piece closes with gorgeously transformed lighting. Spot lit from overhead, each dancer, separated at the rear of the stage, shakes, contorts, distorts, and reassembles the body in a passionate evocation of the transformational power of the dance for the individual in the arc of tradition, innovation, and survival.