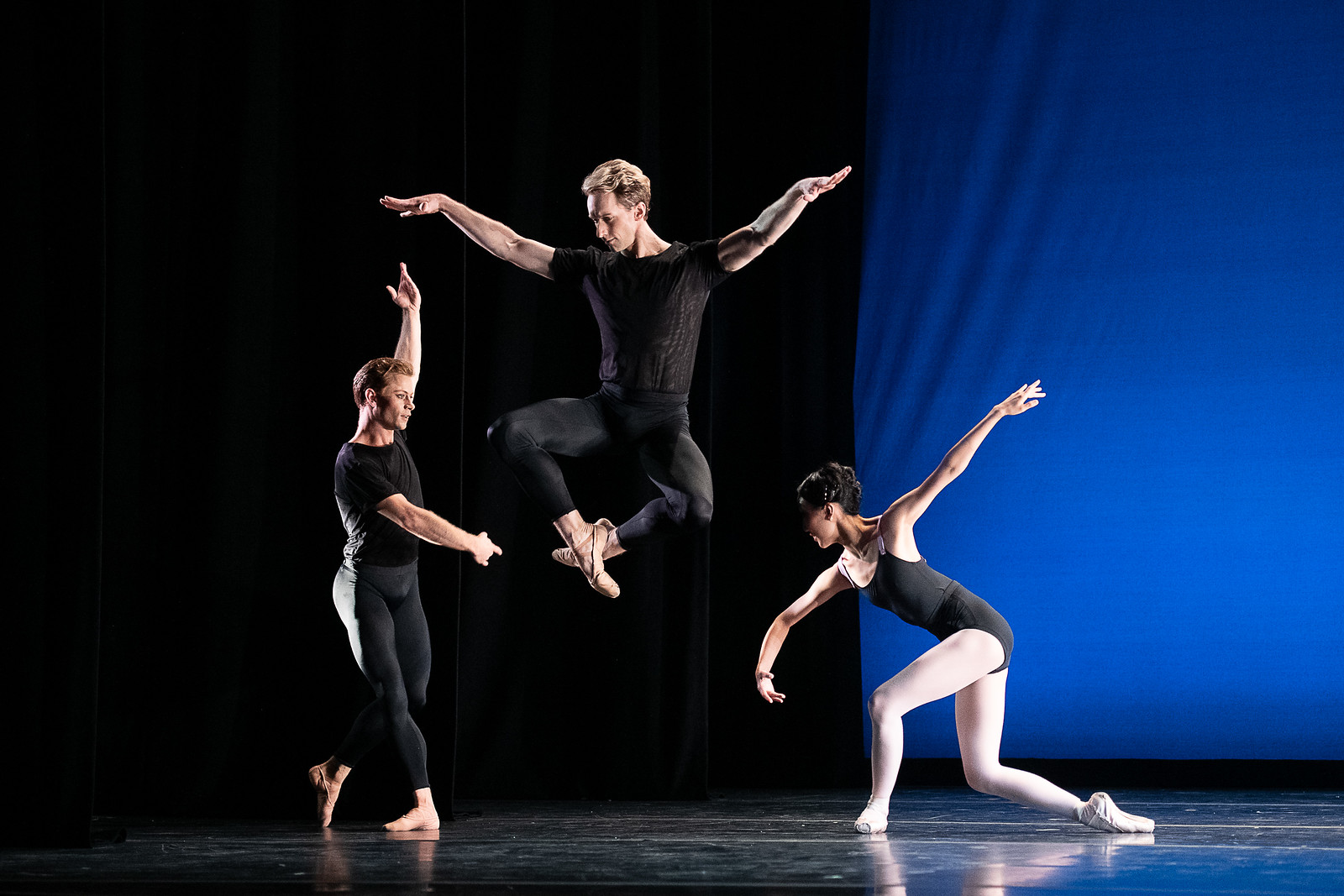 About a decade ago, I spent two years at Boston Ballet’s summer program. Then, the following two summers, I was at their Marblehead Studio for a choreographic workshop. I had excellent teachers: Helen Pickett (a Forsythe disciple) and Jorma Elo (resident choreographer at Boston Ballet) When I found that Boston Ballet was coming to Jacob’s Pillow in Becket, (the first time in 15 years!) with a program that included works by Jorma Elo and Forsythe, there was no question: I had to go.

First on the program was Jorma Elo’s “Bach Cello Suites” set to cello suites No. 1 and 2. Sergey Antonov was the cellist and played beautifully. The choreography was much of what I remember Elo’s work was like when I was lucky enough to be choreographed by him back in 2012: sharp, clean lines; beautiful tableaus within the work; fast-paced nuanced footwork; and some incredibly tricky partnering. Having come up with the idea of choreographing the cello suites myself back when I was in the choreographic program, it was very informative for me to see Elo’s work. We learn so much from watching one another in the world of dance, and it can influence us in our own work. It was neoclassical, and expertly executed by the dancers. Principle dancers Lia Cirio and Derek Dunn stood out magnificently. It was a beautiful piece; everyone looked fabulous, but halfway through, I felt I had seen it all.

Second on the program were two contrastingly different works by Russian choreographer Leonid Yakobson. “Pas de Quatre” came first, set to music from the opera “Norma.” It was a romantic piece. The curtain opened to a lovely tableau of four dancers all in white. and it immediately reminded me of “Les Sylphides” by Auguste Bournonville. In fact, as the piece went on, it became more and more apparent to me that Yakobson had been very influenced by Bournonville. There were all the small intricate precise beats in the pointe work and their upper bodies had the same grace and nuance as any Sylph from a Bournonville ballet, excepting the cute, comical fluttering hand gestures they would use. And of course what really set the stage was that the back door of the stage had been opened. Every so often a perfectly timed breeze would flutter through the trees and make it all the more magical.

“Rodin,” the second of Yakobson’s pieces, was a complete contrast. Inspired by Rodin’s sculptures, there were four tableaux (two dancers to each) to begin with, each representing a sculpture. The music was Debussy and Alden Berg. The dancers wore solid, light grey, footed unitards with no shoes. Each of the four duets had a sense of romanticism, each one telling a different kind of relationship, but the choreography was much more modern. It was very interesting to watch; and the lighting played an important role in creating shadows on the dancers, making them seem even more sculptured.

One again I was curious to see how Yakobson took Rodin’s sculptures and created dances out of them, for I, too, have had the very same idea, and created a piece inspired by his sculpture “The Burghers of Calais.”

Last came an excerpt from William Forsythe called “Playlist (EP).” This ramped up the whole program and was a perfect finisher. Set to contemporary pop music by Peven Everett, Khalid, and Lion Babe and Jax Jones, it was fast paced, energetic and colorful. The male dancers wore pink football jerseys and aquamarine tights with a pink stripe down the side, and the female dancers wore beautiful short-skirted pink leotards.

Forsythe’s style of neoclassical, contemporary choreography, as explained to me by Helen Pickett years ago, was based off of Balanchine movement, except he loved to exaggerate the lines and the bodies. This was very apparent and it requires a lot of physical endurance from the dancers. They performed marvelously, leaping, turning and partnering, all with fabulous abandon.

The program offered a wide diversity of dance and the artists were impeccable in their work. I have many fond memories of when I was a subscriber to the Boston Ballet and would make the trip out several times a year to see them perform. Nothing has changed in their excellence as a top-tier company in the country. They are inspiring to watch.