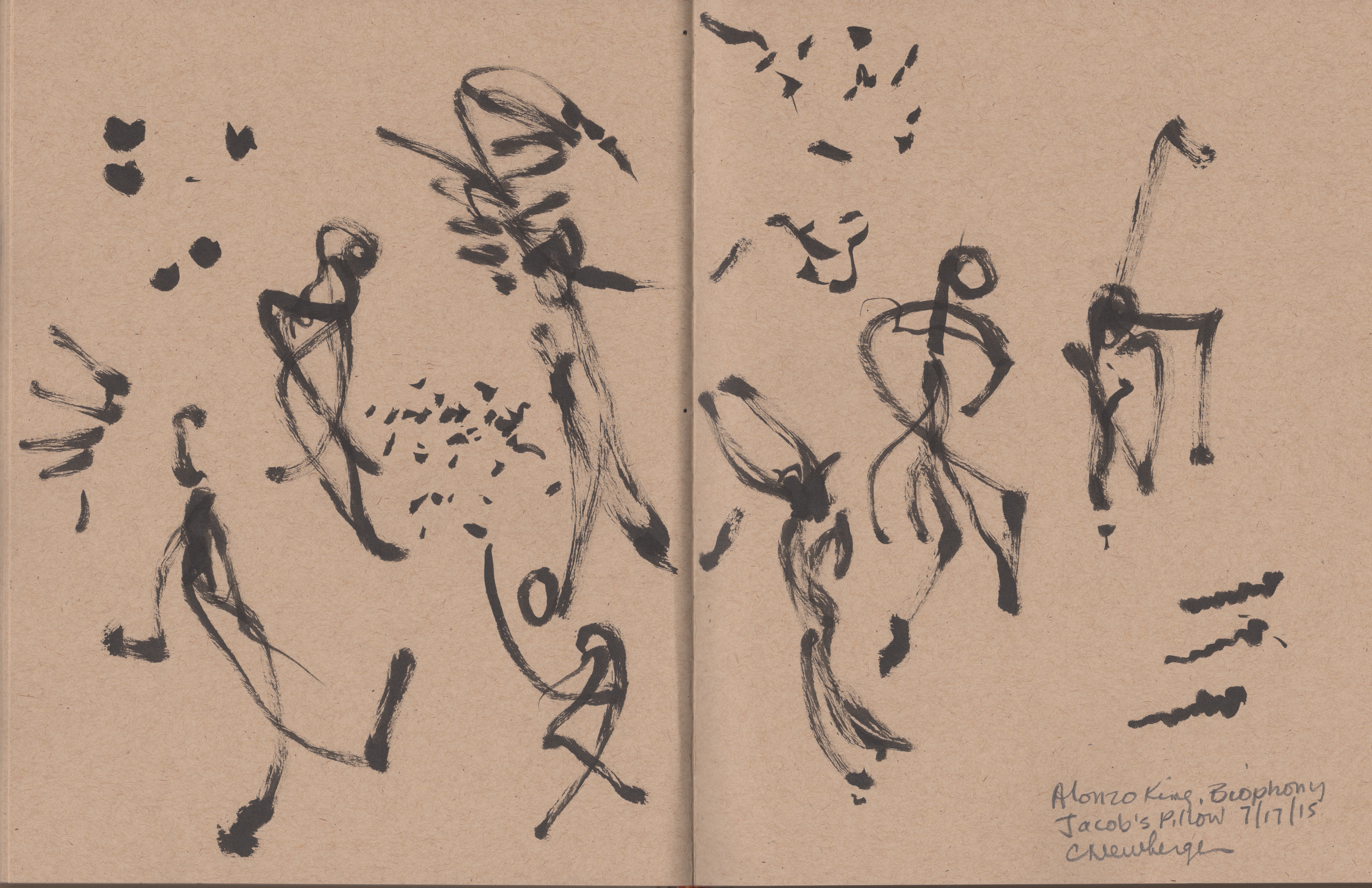 Becket — Time flew by on July 17 at Jacob’s Pillow, during the first half of this moving, penetrating exploration of our relationships with one another and our planet, expressed in a choreography which enabled gifted dancers to give their own interpretations of symbols and signals of the physical, visual, auditory, and philosophical dimensions of our existence. From a setting of J.S. Bach’s 1739 Concerto for Two Violins, Strings and Continuo in D Minor, BWV 1043, in which the violins speak as individuals, flirt, and merge in fugal imitation, through Edgar Meyer’s Radius of Convergence, where the piercing alto saxophone of Pharaoh Sanders peeks through a tapestry of emotional harmonies, the first half of

the performance flashed in successive milliseconds of reaching up, pulling in apart and coming together, in solos, duos, trios, quartets, and quintets of twisting, turning, twining, and tangling. It was heartfelt, honest, and original expression by strikingly beautiful, muscular, tall, linear humans to music of depth and profundity. Notably absent were rote patterns, fixed poses, and showy acrobatics. This was an experience of constant revelation.

The Bach and the dancers mirrored one another in Concerto for Two Violins, without overly precise coordination, and in a striking convergence of musical and corporeal metaphors. Innate tension prior to the resolution of the counterpoint is perhaps the most organic and gripping quality of Bach’s masterpiece, balanced against the luscious, accessible harmony in which the melodic lines are embedded. Each dancer, it was clear, experienced this tension in her and his dramatic, slow extensions, bends, and rises in the central, adagio section.

In the allegro outer movements, there was both an exquisite sense of order in the tutti passages, befitting the church-y formality of Bach’s orchestral composition, and a growing sense of urgency and improvisatory physicality in the dancing as the violins twirled toward their climactic cadences.

Here, in the Pillow’s own promotional video of the LINES Ballet for the 2015 season, one can witness, in the course of the several, brief, intercut passages, the discipline — emphatically without regimentation — that energizes the dancing, in a frame that is both organized and permissive. Notice, as well, how the solo and duo engagements convey spontaneity and human verisimilitude, with bursting sensuality and excited contemplation, drawing attention as well to the act of watching. This is, in Alonzo King’s own metaphor for ballet, thought made visible. And, if you will, fantasy made visible. Note as well Axel Morgenthaler’s apposite lighting that dissolves from cream over a black background to mauve.

In Men’s Quintet, the five dancers progressed from individual display to a striking metaphor of separation, mistrust, and masculine teasing. (This, please understand, is your reviewer’s interpretation of the narrative of the dance. Others may read it differently.)

A group of four formed a weird parade in the rear of the stage, sustaining hand and arm contact with one another as they scuffled along, isolating away from them a man in the foreground. Suddenly, they formed a line, standing side to side, and the man ran desperately toward them and leapt horizontally to arms outstretched at the last possible moment.

If you’ll forgive a didactic moment, it is well to note here that teasing — a preoccupation among many boys and men, especially around themes of status, power, and sexuality — exerts its effects on the intended victim by emotionally isolating or shaming them. In caring and loving relationships, a tease is momentary and can have salutary and seductive effects, when, after the tease is resolved, it pulls us together even more closely than before the tease.

The tease in this dance appeared to be about acceptance and rejection, and it wasn’t favorably resolved. Just after this stunning moment, the quartet moved together diagonally toward stage right, and the teasee, after being saved by them, found himself unable to break into their formation, despite his valiant trying. This is the danger implicit in the tease, which can become a form of bullying.

There was palpable sadness here, as before, with gorgeous dancing, remarkable for its sinuousness, strength, and understated athleticism.

After intermission, a new dance, Biophony, was presented. Lit in various greens, its music, by Bernie Kraus and Richard Blackford counterpoised recorded sounds of the jungle and seashore with electronic simulacra of the post-industrial life. The former predominated, and the dancing evoked an astounding array of imaginary creatures. Bathed in translucent hazes that wafted across the stage, disappeared, and reappeared without overt timing, the men and women became idiosyncratic, striking creatures, with distinctive gaits, temperaments, mating behaviors, and responses to the elements and inhabitants of their worlds.

Here the dance, rising and falling and rising in intensity, reflected the excitement of the computer-generated score. The wild ride of birdcalls, buzzing bees, murmuring chickens, rain showers, shrieks, roars, waves, whale calls, thunderclaps, hisses, bursts of static and occasional marimbas, bongos, and synthesizer swoops provoked a riot of activity at times, always with keenly-individual takes. One female dancer obviously got a kick out of making like a hen, stooping and shaking her booty at the audience. She repeated this several times, provoking a ripple of laughter in the crowd, perhaps the roles of women in rap and music videos were so familiar, or because it was just plain fun.

Yet this last piece lacked the dynamic tension and satisfactions of the first half of program. Surely there was a message about the precarious state of biological diversity in contemporary life. But the sublime capabilities of Alonzo King’s dancers seemed submerged in the tintinnabulations of transcriptions and transistors. Ballet can make us believe that dancers can fly, but this came across as a leap too far from Firebird.

In sum, however, this was an evening full of passion, surprise, and astounding artistry. See it for yourself!