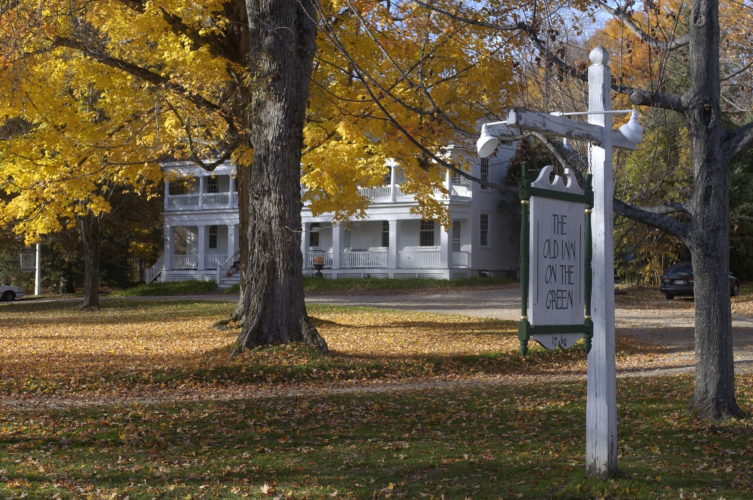 It’s getting to be dinner time and you’re hankering for something elegant, something beautifully prepared, something with taste that soars beyond your accomplished but still limited culinary skills. And suddenly you remember The Old Inn on the Green in New Marlborough, well known for its 19th century aesthetic and 21st century preparations.

And there you are, on a Sunday night pondering the “specials” menu, wondering whether to indulge in the lightly curried roast beet soup with dill yoghurt and celery leaves; Maine cod braised in spicy lobster broth with shitake mushrooms, baby bok choy, soba noodles, and cilantro poached lobster; and polish that off with a warm apple crisp topped with vanilla bean gelato.

As these creations demonstrate, The Old Inn exudes the qualities one expects of the quintessential New England inn, with its rustic atmosphere, candle-lit rooms, seamless service, and, most importantly, elegant food. It’s where you go to celebrate a birthday or anniversary, to impress a new client or lover, or simply to indulge in exceptionally prepared food.

Peter Platt and his wife Meredith Kennard own and operate The Old Inn on the Green. Born and brought up in Wilmette, a wealthy northern suburb of Chicago, Platt attended the Deerfield Academy and graduated from Williams College with a degree in history.

Platt got into cooking after spending a college winter-term independent study project at a cooking school in London. In his senior year at Williams, he did a work-study program at the Parker House Hotel in Boston, home of the Parker House rolls. He then worked there for five years before returning to the Berkshires in 1985 as the sous-chef at Wheatleigh in Lenox. In 1999 he was promoted to chef there.

In 2007 they bought the Southfield Store primarily to accommodate the needs of his longtime pastry chef Shirl Gard. It quickly became much more than just a bakery, its beautiful interior space serving almost as a community center for its rural neighbors. The Old Inn does not serve lunch, so often the Inn’s guests go to the Southfield Store for mid-day sustenance.

Platt is a longtime member of Berkshire Grown, having been recruited by the first director, Amy Cotler, to help her organize the organization’s annual sold-out harvest suppers. Platt serves on the board’s executive committee, and is impressed with current director Barbara Zheutlin, noting that “she’s brought the organization into the 21st century and is making it the leader of the local farming movement.”

Located out in the midst of beautiful rural scenery, the Inn is not conveniently located for deliveries. So this summer the Inn had its own farm, growing lettuce, kale, tomatoes, cucumbers, and various squashes. Additionally, Platt buys eggs and milk from High Lawn Farm for his retail gelato, greens from Ted Dobson’s Equinox Farm, and tomatoes and other vegetables from Laura Meister at Farm Girl Farm. More fresh vegetables come from neighbor Freddie Friedman’s Haymeadow Farm. But, in summer, Platt shops every day at Guido’s because “I like to see the stuff I’m buying.”

The Inn’s decorations are also local, created by Pam Hardcastle, whose favorite source for her artistic creations is the local landscape: flowers, leaves, twigs, branches, pine cones, and anything else that catches her fancy. It’s impossible to look around the Old Inn without enjoying the sight of one or more of her graceful natural concoctions.

Catering is a large part of the Old Inn’s business, ranging from charity dinners for 200 or more guests to dinner parties for as few as a dozen people. Assisting Platt at the Inn and with catering is baker Amanda Berreault, who trained under Shirl. Before joining the staff at the Old Inn, Berreault worked at Chocolate Springs in Lenox.

Many of us only think of The Old Inn on the Green as an elegant restaurant, and often forget that it is also a place for lodging. Built in 1760, The Inn has five boarding rooms plus six rooms that were opened in a separate building on the grounds in 1820. Befitting an establishment of its age, every room is different.

If you are into time travel, a visit to The Old Inn on the Green is a rustic recapture of the era before electricity, with candles providing a cozy welcome to a place where food is taken very seriously.