Double Decker Farm in Hillsdale, New York, where 21/2 acres produces enough tomatoes and onions to support the organic farm. It was one of the original farms selling produce at the Great Barrington Farmers Market -- and still does.

Debbie Barber and Tom Decker, owners of Double Decker Farm in Hillsdale, love farming. “If you didn’t love it, you couldn’t do it,” confides Debbie. “You need the romance at the beginning of the season because by the end….”. But she also acknowledges that the romance kicks back in the following spring when “…it’s great to start all over again.” 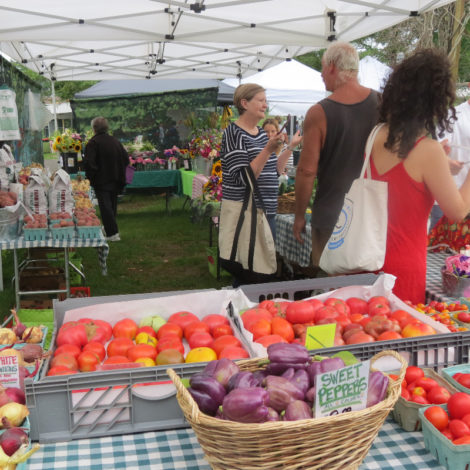 The Double Decker Farm array of tomatoes for sale at the Great Barrington Farmers Market.

Double Decker’s two largest food crops are tomatoes and onions. Starting in mid-July, there will be about 65 different kinds of tomatoes. “Tomatoes are our big draw,” says Debbie. Their other big seller is the large array of flowers—120 different types–available all season long. They also grow potatoes, garlic, pole beans, shallots, cucumbers, squash, broccoli, Brussels sprouts, sugar snap peas, and potted plants. “By being diverse, we can insulate ourselves from the tragedies of farming,” says Tom.

Double Decker Farm was one of the original farms at the Great Barrington Farmers Market when it started 25 years ago. Debbie also managed the market for a few years. “Our market is run by farmers for farmers,” one of the reasons Debbie believes it has been so successful. “The market is tightly controlled, and adds members only when some of the farmers begin to run out of food at the end of a market day.”

The couple started Double Decker Farm when they both had other full-time jobs. Tom spent more than 23 years working on the grounds of Bard College at Simon’s Rock, and Debbie worked at Ward’s Nursery. The couple has experimented with selling at more markets, but are now able to succeed with just the Great Barrington’s market.

Tom reminds me that 25 years ago, when the Great Barrington Farmers Market first opened, Great Barrington was most assuredly not the hustling, bustling, popular town it has become. “Main Street was dead,” he says. He goes on to say that back then, farmers markets were most likely to be found in college towns. What farms existed here at that time were dairy farms, many of them beginning their long, slow descent into closing their barn doors. 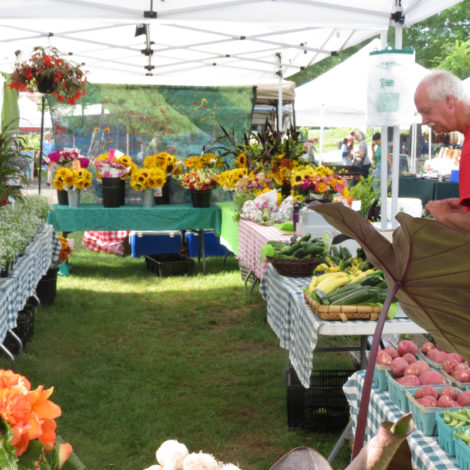 The Double Decker stand at the Great Barrington Farmers Market.

Debbie did crafts as they were getting started with the farm. Tom had a garden, and worked at roadside farm stands as a youngster. He always loved growing vegetables. Debbie’s involvement in farming began as a form of rebellion but grew into a greater understanding of what they land can produce.

Although the Great Barrington Farmers Market runs for 26 weeks, Debbie reports that there are only ten weeks when they make money. “It’s the same on the Cape —July 4 to Labor Day is ‘the season.’ ”

Despite buying land described as “worthless,” the 2½ acres on which Double Decker Farm is located is productive. “That’s because of what we did to it,” says Tom, with Debbie providing the details of the work they put in making the farm a success. “We plowed up concrete blocks, steel cables, tires — you name it,” says Tom. They only grow with organic materials, and mulch with hay. Their farm sits on top of a spring-fed aquifer, upon which the town of Philmont draws its water.

Their philosophy is to not grow more than they can sell. They scrutinize what sells, and if a crop does not make money, it’s dropped the next year. “With 2 ½ acres of growing land, everything has to work,” says Tom. “And corn takes up too much room for us.”

They started farming in 1990. “We’ve added equipment that’s changed our lives,” says Tom, noting that using a rototiller instead of hand picking made a big difference. But even now they do not use mechanics for harvesting.

Like the other farmers I’ve highlighted, Tom and Debbie are grateful to Jane Iredale for hosting the Great Barrington Farmers Market on her property. “She’s an amazing lady,” they say.

By the end of this season’s market, their current farm will be up for sale as they move to a new farm one mile away in Martindale, N.Y. “We’re building a house there,” says Debbie, who believes the move will help consolidate their farming operations.

Tom calls Great Barrington “Pleasantville.” “I wish the whole world was like that.” They regaled me with stories of good deeds done by patrons at the farmers market, including returning money dropped, sharing recipes, and all those genuine smiles. They know their customers’ kids and grandkids and dogs. “There’s so little of that in our society,” says Tom, “so selling at this market is the best job in the world.” Amen.