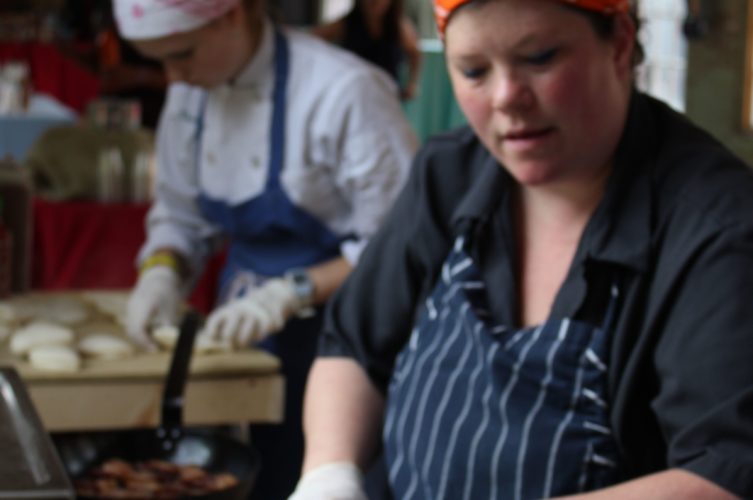 You probably don’t have to graduate from culinary school to become a chef if you catered your first wedding when you were eight years old. Or if both of your parents, an uncle, and several of your siblings are chefs. Or if your first restaurant job was when you were 12 years old. Such is the case with Daire Rooney, chef at Allium restaurant on Railroad Street in Great Barrington since October 2012.

As a chef, Rooney has been around. She has worked at a number of restaurants, including Brix in Pittsfield for four years. And for seven years she was the chef for Meryl Streep’s family.

Rooney is no stranger to the Mezze Restaurant Group, owned by Nancy Thomas and Bo Peabody. In addition to Allium, the group owns Mezze in Williamstown and Mezze Catering. Rooney did several stints as chef at Allium in summers when she was chef at the Augusta National Golf Club, home of the annual Masters Golf Tournament since 1934.

Rooney is at the head of the class when it comes to buying from local farmers, whom she names on her menus. Even in the dead chill of winter, the Allium menu features locally sourced food: popcorn and yogurt from Berle Farm, eggs from Mill River Farm, broccoli raab from The Berry Patch, veal from Cricket Creek Farm, cheese from Bayley Hazen, and chicken from Misty Knoll Farm.

There is a fresh menu every day so no matter how regularly you dine at Allium, there’s always something new to taste. But for those who have favorites, there’s also her staples, offered night after night. These include the ubiquitous kale salad, deviled eggs with bacon jam, fried pickled onions, tacos, and a burger to kill for.

Rooney’s menus feature old favorites with inventive twists. You can have popcorn as a starter, but it’s not like that popcorn you toss into the microwave. It’s from the Berle Farm and it comes with pecorino cheese, brown butter, and truffle salt. Or faro salad with watermelon radish, pistachios, pecorino, roasted pumpkin, basil and mint. Or the chicken liver mousse with honey-poached cranberries, marcona almonds, pickles, and toast.

If you’re looking for a larger plate, you might try Misty Knoll chicken confit with curried chickpeas, Berry Patch broccoli raab, and tahini yogurt. Or the pappardelle with Cricket Creek Farm veal and porchini mushroom ragout, topped with Reggiano. And there’s always the Daire Burger, made from Neff ground shortrib and brisket, cheese, lettuce, pickles, bacon jam, and house frites.

For most restaurants, Saturday night is the busiest of the week, and Allium is no exception. But a close second is Tuesday when it’s pizza night. Tuesday has been pizza night at Allium since well before Rooney took over as chef. It has been and remains a very popular tradition in Great Barrington.

Allium’s sister Mezze in Williamstown offers “Comfort Sunday,” a three-course prix fixe dinner on Sunday nights. Its popularity is responsible for Rooney’s current thoughts about offering a community table one night a week at Allium. She envisions a long table in the dining room where a family-style meal would be served. One hopes this comes to fruition.

Rooney is an integral part of Berkshire Farm and Table, a cooking group that includes Brian Alberg of The Red Lion Inn, Dan Smith of John Andrews, and Jeremy Stanton from The Meat Market. This core group cooks annually at the James Beard House in New York and orchestrates the Outstanding in the Field dinners here in the Berkshires. They usually ask another chef to join them in these ventures.

In March, Allium and Mezze will be presenting their own dinner at the James Beard House. Although the menu is still a work in progress, it will include three dishes from Allium and four from Mezze.

Rooney is the lead chef for the 2015 March Maple Dinner sponsored by Berkshire Grown. She plans to make the dinner “a grand tasting” so she can invite more than four or five chefs to participate. There will be a series of small plates providing a wide range of taste sensations. These dinners, held at Cranwell in March, typically sell out so Rooney advises making a reservation early.

I’m a cookbook fanatic, and as we started talking about cookbooks Rooney happily hauled out five well-worn cookbooks. She’s a big fan of Gabrielle Hamilton, the chef-writer whose memoir Blood, Bones, and Butter is still a best-seller. She’s partial to Sean Brock’s Heritage, a cookbook stemming from his restaurants in Charleston. Like so many other cooks, professional or amateur, she has Plenty by Yolam Ottolenghi, as well as his other cookbooks. She likes the cookbook from Au Pied de Chochon’s chef Martin Picard. David Chang’s cookbooks are among her favorites. Ditto Thomas Keller.

At the end of this month, Rooney will be cooking a truffle hazelnut dinner for the World Yacht Dining Cruise in New York, a company an uncle used to own.

In addition to her restaurant and catering tasks, Rooney also teaches classes for the culinary program sponsored by the Railroad Street Youth Project.

Rooney’s favorite food is the kind you can eat with your hands, and can share. “I like food that’s fun and interactive,” she says. When she cooks at home, her favorite is roast chicken, or, in summer, a good steak from the grill. Who can argue with that?