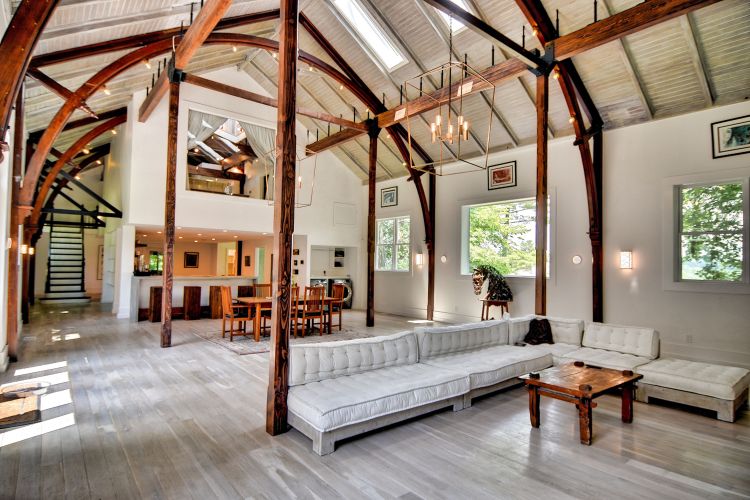 The restored interior of the Playhouse at Foxhollow. Photo courtesy Shared Estates

Egremont — If the Berkshires ever develop into a year-round destination and become an economic powerhouse, it will take innovation — and lots of it.

Fortunately, Berkshire County has a surprising number of entrepreneurs who are prepared to seize the day in an effort not only to make money but perhaps even to make the region a better place.

Berkshire County has an abundance of fancy estates, most of them relics of a bygone era. Fueled in large measure by the wealth created during the economic boom after the Civil War, monied families escaped the city during the Gilded Age and set up shop in desirable towns such as Lenox and Stockbridge. Think The Mount, the Bellefontaine Mansion (now Canyon Ranch), Ventfort Hall and Cranwell. Most have been turned into fancy resorts or cultural venues.

But there are other estates that have yet to reach their potential, or are in need of serious investment either to preserve them or to make them financially sustainable. Enter Shared Estates, which bills itself as “a carbon neutral real estate developer, owner-operator of luxury short term rental estates in the Berkshires of Western Massachusetts.”

That’s quite a mouthful. Essentially what Shared Estates does is acquire historic estates, preserve them through renovation, make them environmentally sustainable and put them on the growing Berkshires high-end short-term rental market. Oh, and it raises capital through crowdfunding, or raising small amounts of money from a large number of people, typically online.

“If you flip through Airbnb for Berkshires properties, none of them are carbon-neutral except for ours, probably,” Shared Estates managing director Daniel Dus said in an interview. “Folks are not focused on it yet.”

Dus (pronounced DEUCE) previously redeveloped the Playhouse at Foxhollow in Lee. The playhouse, acquired by Shared Estates in 2014, was built in the late 1800s by George Westinghouse, the renowned electrical engineer and entrepreneur, and quickly became the most rented property on HomeAway/VRBO, a short-term rental platform, after its rehabilitation. Westinghouse owned the estate and built the playhouse, the first residence in the world powered by AC electricity, for his children.

“The playhouse was literally structurally failed, so the roof looked kind of like a wave,” Dus said. “My engineer told me that in another 50 years it would have come down without a lot of work.”

So Shared Estates rehabilitated the property, including structural upgrades, new electrical, plumbing and roof as well as window, door and fixture replacement. The main floor has 30-foot vaulted ceilings with lofts at both ends, and large windowed cupolas. With 15 beds and convertibles, it can readily sleep 20 or more.

“We preserved the gorgeous archways as well as the original Westinghouse lighting fixtures from the late 1800s, so it was not an easy process, but we felt it was important rather than just modernizing everything we could,” Dus explained.

Dus said the playhouse is the top vacation rental in the Berkshires market; was developed, owned and operated by the management team since 2014; and recently sold at a profit. The property sold for $1.33 million on Nov. 9. The new owners plan to list the property for short-term rentals, Dus said.

Dus, who was raised in the Berkshires and spent 15 years in the solar energy field, also believes in environmental sustainability and is convinced that large short-term rentals can also be green.

A lot of Dus’ colleagues in sustainability ask him why he’s buying those mansions, because they’re not exactly green. He tells them he’s not building mansions but engaging in historic preservation and making the structures more energy efficient.

Dus’ company recently acquired the Williamstown estate of the late actor Christopher Reeve, who was a regular on the stage of the Williamstown Theatre Festival. Reeve’s family only used the property a couple of weeks per year.

When he’s finished with it, Dus expects the Reeve estate to have a similar occupancy rate to the playhouse, which has rented extensively to all forms of group travel, booking well in advance an average of over 240 nights per year. The weekend vacancy rate at the playhouse has been less than 1 percent.

“If it gets a lot more use, that actually translates to a lower per-person carbon footprint per stay,” Dus explained.

The Shared Estates properties rent for between $1,500 and $2,500 per night and are generally rented by families planning reunions, weekend get-togethers and the like. That actually brings the per-person cost down considerably. The minimum stay is two nights. Some customers, however, stay for weeks at a time.

Asked who his main competitors are, Dus replied, “I guess the Canyon Ranches and Miravals of the world are the next most likely stay, but not really. The thing is, with small group rentals, which is really our focus, its 10 to 15 folks, a multigenerational trip.”

“We have so many grandma’s 80th birthday parties, 50th wedding anniversaries, that kind of thing,” Dus continued. “If you have a family, that might be 10 or 15 folks and you rent four or five rooms, then the real competitor just becomes a Holiday Inn or a standard hotel because that’s the price point that we’re in.”

The company’s next property at 6 Bow Wow Road in Egremont, which Shared Estates acquired for $1.6 million, will be renamed the Freeman Berkshires in honor of Elizabeth Freeman, an Ashley Falls woman who, in 1781, was the first African American enslaved person to successfully sue for her freedom. A sculpture garden by local artists will also honor Freeman and her story. The property will donate a percentage of its profits to the Elizabeth Freeman Center, a Berkshires-based nonprofit focused on fighting domestic abuse.

Set on the banks of the Harman Marsh Pond, the original section of the estate was built in the 1800s with an Adirondack Lodge layout. Dus says the property was soon acquired by the prior chairman of a Fortune Top 5 company, and a large red-brick addition was added, increasing the property to over 11,000 square feet.

The rehabilitation will use “best-in-class materials,” including imported marbles, hardwoods and giant pine. The interior will be extensively modernized. Exterior additions include a high-end swimming pool, a greenhouse, pond docks and a sculpture garden “by leading artists.” A percentage of income will be donated to support The Elizabeth Freeman Center.

Dus says Shared Estates was focused on rural American real estate before the COVID-19 pandemic, which has actually — albeit sadly — created a boom in its business. Airbnb, for example, has reported a more than 25  percent increase in rural rentals and, as The Edge has reported, a buying “frenzy” in the Berkshire County real estate market.

But beyond historic preservation, environmental sustainability and making money, there’s another component to the redevelopment of these high-end estates: investment opportunities through the Shared Estates Asset Fund for those without a lot of money.

“The other thing that is really innovative about what we’re doing is we’re packaging these estates into investment vehicles,” Dus explained. “Historically you had to be an accredited investor, according to SEC regulations, in order to invest in private equity deals. Private equity deals are for people who are already wealthy.”

Is this a good time to be getting into the short-term rental market, or expanding your presence in that market, as Shared Estates is doing? Recent trends suggest a boom in the short term-rental market.

The professional investor class is betting big on Airbnb, which lists Shared Estates properties. Airbnb went public earlier this month, issuing stock in an initial public offering at $68 per share, but it closed at nearly $145, boosting the company’s market capitalization to more than $100 billion, or more than Expedia and Marriot combined.

Since the IPO, Airbnb’s stock price has come back down to earth, dropping 25 percent and costing its co-founders $5 billion over the course of only three trading days. As of Dec. 15, Airbnb’s market capitalization was about $73 billion.

But it’s hard to determine to what extent Shared Estates fits neatly into the short-term rental market. It’s a much more upscale affair than booking a modest cottage for the week on a lake in Becket.

Dus says the Shared Estates model relies on family get-togethers or reunions over multiple days. Groups of 10 to 15 people reduce the per-person costs and make a Shared Estates property more attractive as a short-term rental.

It goes without saying that there is also competition in the regional estates rental market. To wit, in Ludlow, a southern Vermont town famous for the Okemo ski resort, VRBO recently listed the Grahall Estate, a mountaintop castle on 300 acres of untouched land, among its 10 coolest, most unusual VRBO rentals in the world. It’s currently listed at $910 per night.

Then there is the matter of surviving during the pandemic. Even after the Berkshires emerge from winter, historically the slowest season, it’s doubtful the region will be back to normal. It’s still an open question as to whether the county’s premier cultural institutions such as Tanglewood, Barrington Stage and Shakespeare & Company will have full seasons or in-person performances at all, for that matter. The same goes for museums such as the Norman Rockwell Museum and the Clark Art Institute. Even if they’re open next summer, it will likely be at reduced capacity.

And a survey released last month by the Mass Cultural Council found that cultural organizations in western Massachusetts suffered $55 million in COVID-19-related losses since March. Will the fate of those organizations improve next year? With coronavirus vaccines making their first appearance in the U.S., hope is surely high for a rebound.

There is also the matter of the regulatory future for short-term rentals. The town of Lenox, for example, passed new regulations last year on Airbnb and the like. Gov. Charlie Baker also signed a bill in 2018 regulating short-term rentals and applying the same tax to Airbnb-style rentals as the one levied on rooms in traditional hotels. The Berkshire Regional Planning Commission has additional resources.

“Having been born and raised in the Berkshires, I’d often drive by these beautiful historic estates, many built in the Gilded Age by America’s wealthiest families. Most had clearly seen better days, and I rarely, if ever, was able to set foot in them as a middle-class local,” said Dus. “I’ve always wanted to change that.”