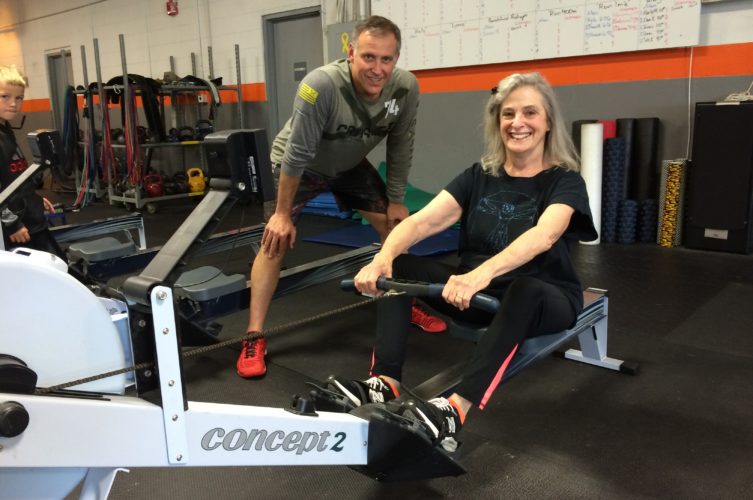 Great Barrington – For that past 18 years, the poet Karen Chase has assiduously devoted herself to a workout routine with trainer Mike Bissaillon, first at his setup in the basement of the post office in Lenox where Chase lives, then at the Lenox Fitness Center,  and now at his CrossFit Great Barrington gym on Crissey Road.

Chase had a reason – a reason she’d never told anyone except her trainer – for her commitment to strenuous exercise.

That reason is revealed in her newly published memoir, “Polio Boulevard.” (See Dan Bellow’s review of this remarkable book published last week on The Berkshire Edge.) When she was 9 years old she contracted infantile paralysis, for which at the time she became its victim there was no cure.

Ironically, in 1953 she was in a hospital ward, having undergone extensive and excruciating surgery and in the midst of four years of recuperation from the physically crippling disease when it was announced that Dr. Jonas Salk had developed a vaccine. Those in the ward with her responded in unison with bitter laughter, she wrote. “Too late,” they said.

“I hate exercise so deeply,” she comments, wearing a BizFit Nation T-shirt while preparing to work out under Bissaillon’s guidance on a recent afternoon, “but it is so critical for my health – and for everything else. And the reason I’ve been with Mike is that he makes this necessary exercise really fun.”

“Polio is something I never talked to anyone about, but I’ve always talked with Mike about it. Polio has been a presence in our work,” Chase explains. “Since the age of 10 I’ve not had this conversation with another person who’s had polio.”

She is convinced that without her exercise routine she would not have remained healthy.

To celebrate the publication of her book, and to acknowledge the role that Mike Bissaillon’s physical fitness routines have played in keeping her healthy, CrossFit Great Barrington and the Berkshire Edge are co-sponsoring a potluck barbecue on September 19 at 7 p.m. at the CrossFit facility on Crissey Road. Chase will be reading from her memoir and signing books. The public is invited; the reading and the barbecue are free.

“The barbecue will be a fun, end-of-summer Berkshire event,” Bissaillon says. “ Bob Luhmna and Clayton Hambrick will be chefs for the evening. And it will be a celebration of fitness, and of the fact that someone has overcome a crippling disease.”

Ironically, Bissaillon and Chase share a similar reason for their commitments to physical fitness. When Bissaillon, who grew up in Adams, was in high school, he broke his arm playing a pickup game of football.

“I was in a cast for eight weeks,” he recalls. “During the long recovery and therapy, I found myself getting interested in how to get the body stronger as a way of maintaining your health.”

In addition to the reading, Bissaillon will explain how the CrossFit regimen can benefit polio victims.

“CrossFit method is broad and inclusive and it isn’t so hard,” he insists. “It truly is for everyone, and anyone can get started. Our classes have mixed ages, from 40 years old to 70 and older.”