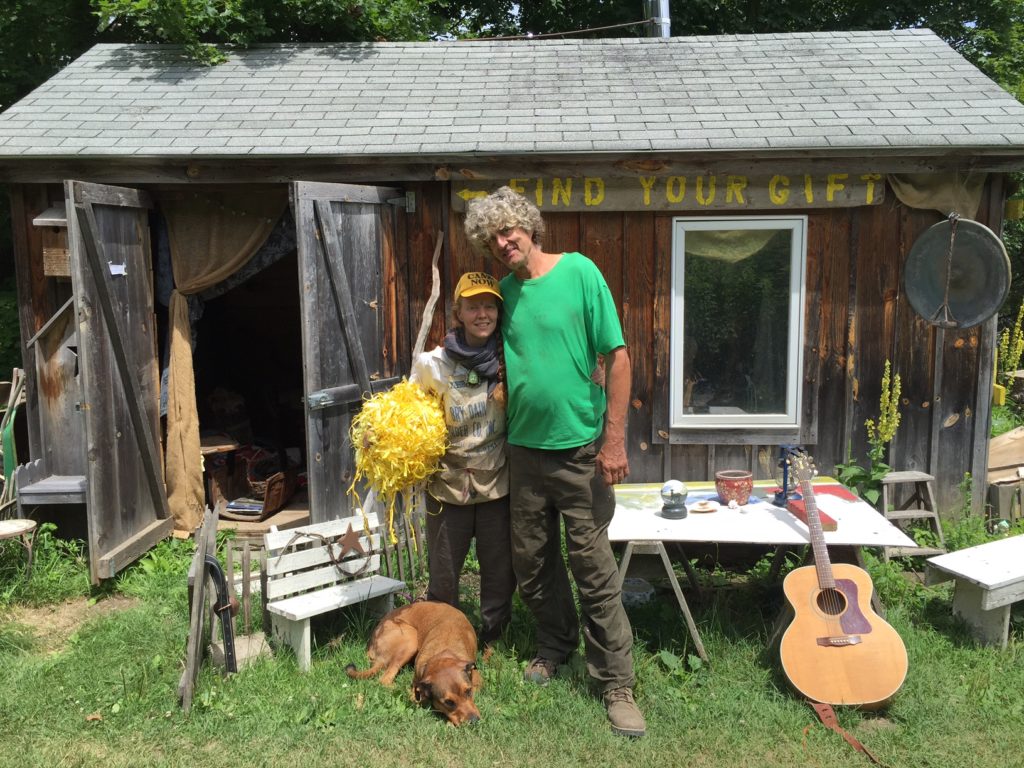 Heather Bellow
Performance artist Cassidy A. Maze with her partner, Roger Boutard, and their dog Willow in front of the cabin he built for her to create in.

New Lebanon, N.Y. — More than 20 years ago in Manhattan, Elizabeth Westergaard decided to explore someone she had found inside herself and see just how far she could take that character through life. 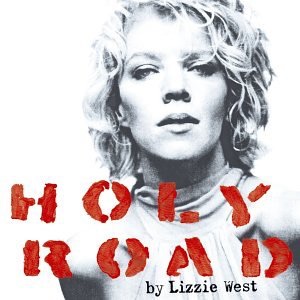 That character was singer/songwriter Lizzie West, who rose from playing to L-train subway commuters to signing with a major record label, followed by six albums and songs for film and television. But when music executives began “censoring” her music and tried to turn her into a “pop artist,” West put the kibosh on that career, kept on writing songs, had a child, and is now in tune as another character: Cassidy A. Maze.

Maze calls herself a “performance artist” with a “root character.”

“We frame ourselves unconsciously,” Maze says. “If it could be conscious, we would be better served.”

On a hot July afternoon at “Gnairyville” (Gnome-Fairy Ville), an enchanting, sprawling homestead where Maze lives with her 6-year-old daughter and partner, Roger Boutard, she told the Edge while she wanted to see what Lizzie West could do, the “trick” was not “to get caught up in it…that’s what the machine does; it squashes it into the lowest common denominator. I let it go when it was no longer authentic.”

But Maze says the rising stardom of Lizzie West is “evidence” of a “theory and life practice” that works to bring people as close as possible to what they’re meant to be doing in the world. Maze calls it Crealitation, a process that calls for embracing the qualities of uncertainty to find the calling but applying a strict discipline to whatever it takes to make it happen. “Like getting up at 3:30 to write your song,” Maze said.

“What would happen if I lived my life as fiction?” she said she had asked herself years ago. Vincent Van Gogh’s life had inspired her. So did “Lust for Life,” Irving Stone’s biographical novel about the painter. “What if I applied the same rules of writing to my life, experiment with that character, then put that character to rest?” 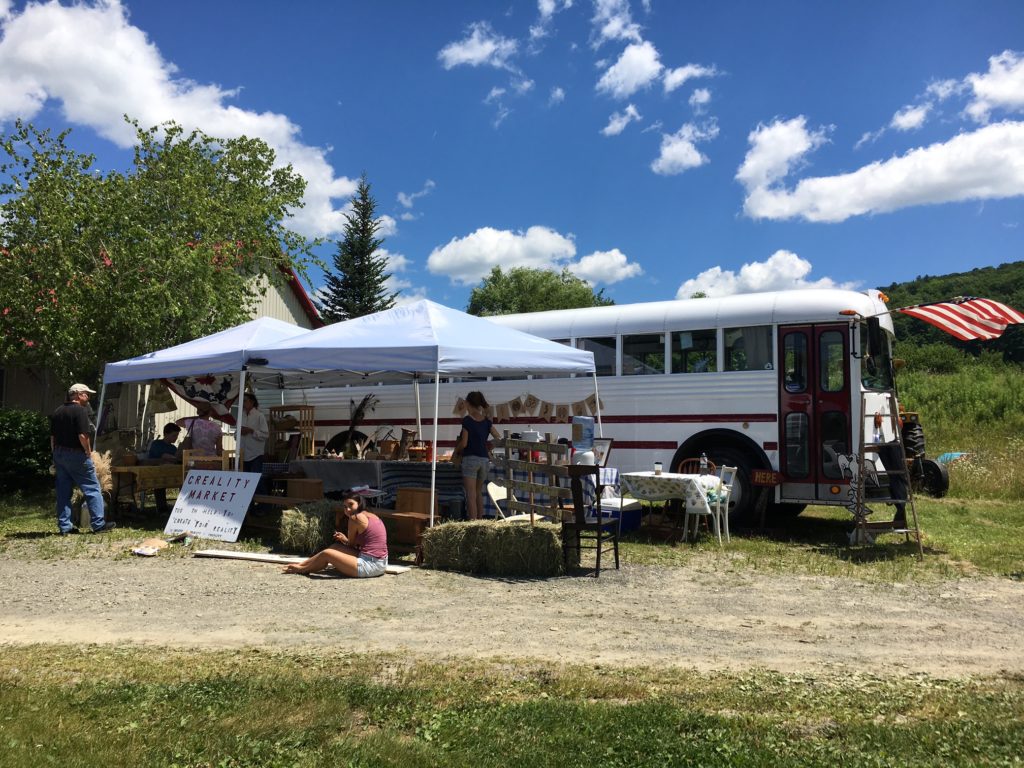 The Peace Bus behind the Creality Market, a pop up selling “tools” for Crealitation. Photo: Cassidy A. Maze.

The way, Maze has found, is to “think it, write it, do it.” She even applied this principal to finding herself what she has named the “Peace Bus,” a restored vintage tour bus she considers a luxury after years “stuffed in a Jeep” while touring as Lizzie West.

Crealitation has grown into more than just a practice. With headquarters at Gnairyville, it is now Maze’s work, from which has sprung Camp Now, a content and artist development company, several social media sites, and the Creality Market and Musical Tent Show, coming to the Great Barrington Fairgrounds on Sunday, July 24, from 3 p.m. – 7 p.m. The show will feature excerpts from Maze’s “Crealitation: The Myth, Method, Music and Magic of Cassidy A. Maze.” The work in progress will feature the Big Takeover band and other regional artists like Brooklyn-based Lady Moon, the “voice for the lead character.” 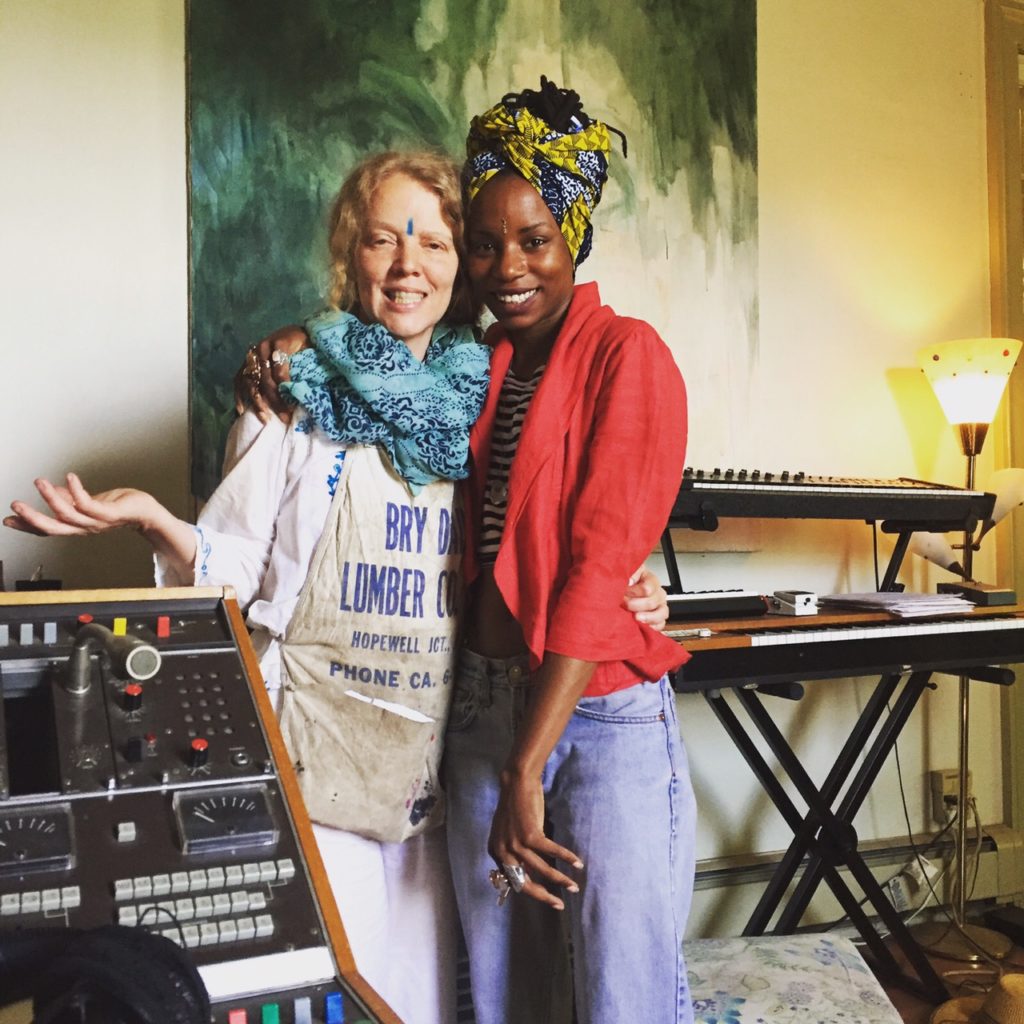 Maze, who studied playwriting at New York University, talked about the musical and its promotion and the story of another character Maze is working with, G.E. Fox, and how Fox “crealitated her way out of trauma.” Some of the music has already been released through separate funding campaigns, and one song is now on iTunes. Dogs Willow and Merlin nearby, Maze says she been rehearsing like crazy, and that Moon was coming to rehearse for a few days and will stay in the “Creality Cottage” near the main house.

A few chickens saunter by. Boutard brings us different varieties of currants he’s just picked and explains how the bears wait for people to finish picking the blueberries before they come for a snack. We stop a take a peek inside Maze’s own creative space, a small cabin Boutard built for her behind the house. Boutard re-hangs the “Peace Ball” from the ceiling. It is made up of 3,000 yellow ribbons collected on her “19 Miles to Baghdad” tour, where everyone who got up and sang with her added to it.

Maze explained that Gnairyville will be a retreat for artists to work the Crealitiation process.

Given her approach, I ask Maze what she thinks about the soul and whether her process is a way to line up with one’s own, given so many material distractions. “I accept that I will never really know this mystery,” she said, adding she wants to maintain a “practical practice to direct my story every day. Who am I? To ask that question and play with it productively.”

“All of us are artists,” she said. “It matters how we spend our time. We have to stop running and living by someone else’s story line.”

The Creality Market and Musical Tent Show is coming to the Great Barrington Fairgrounds on Sunday, July 24 from 3 p.m. – 7 p.m. Tickets are $25 in advance and $33 at the door for the general public and $15 for Crealitation members. The event will also feature dancing and food vendors. For tickets and more information, see the Berkshire Edge calendar.