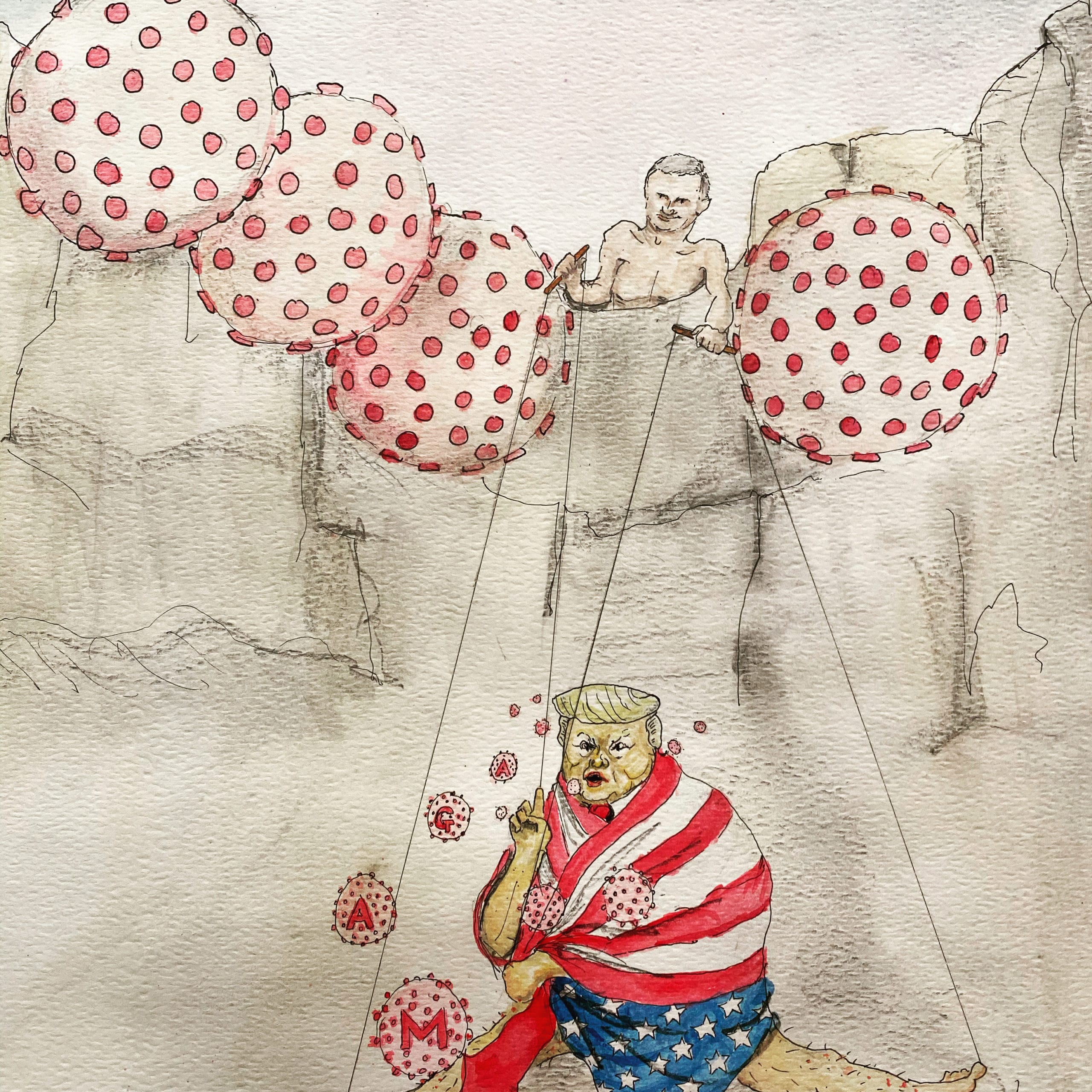 Lyrics from the song, “Everybody Knows”

People I know talk about the future – all the things they plan to do. My friend’s husband who is around my age, 64, and has multiple sclerosis, told me that he wants to dance at his granddaughter’s wedding. She is currently a toddler. “The planet will be uninhabitable in 20 years,” I respond. I hate to be a downer but I can’t help pointing out what to me is a fait accompli.

I have more time than ever to dwell on the apocalypse. I was diagnosed with a debilitating and progressive eye disease called pre-retinal fibrosis which causes me to see, at least out of one eye so far, a wonky and warped world. This has meant an early retirement and a withdrawal from many of the activities in which I was once engaged. I can’t drive at night. I can’t visually handle being in open spaces full of people or objects. I went from being an active person in the community to being forced to confront my limitations and myself.

These days, especially after the redacted Mueller report came out, I lie, no, I cower under the covers for a good hour before getting up. I wake from dreams and nightmares as vivid as my daytime hours, besieged with thoughts. The dread is akin to when I would awaken during my husband’s dying time and it would hit – a personal horror that seemed impossible to bear.

This time, the horror is collective. It is our new reality. And, my cowering is driven by my grief for what has been lost since November, 2016 and what is yet to dissolve: possibly Democracy itself.

Then the thoughts: what is the real reason behind why Mueller did not fulfill his prosecutorial duty and state in so many words that Trump is guilty of obstruction of justice? Who or what kept him from nailing it? Barr? Rosenstein? Putin? Not indicting a sitting president is policy, not law. To impeach or not to impeach? Is it really possible for a Democrat to win in 2020 with the Russians proceeding full speed ahead to intervene on Trump’s behalf? Can those Republicans really ignore subpoenas and get away with it? Is it too late for Barr to retrieve his soul from the devil?

There must be at least one whistle blower working for the IRS who will leak Trump’s taxes to The Washington Post. Why can’t the secret service turn on Trump? They could walk out of the White House and leave him alone in a chair naked, except for his red tie, tweeting while watching Fox News. Maybe Alzheimer’s will erupt for all to see including his base? (Isn’t this a hopeful thought?) How much pressure can this deranged man take without blowing into bits? Hawaii beaches under water. White Supremacy spreading like wildfire. How can we bring children into such a world? What the fuck do we do about Mitch McConnell? Lindsey Graham?

After a landslide of thoughts I get out of bed, open the shade, let in the light, and have breakfast. If I am kind to myself, I avoid news programs on TV and turn on the radio to a classical music station. However, I haven’t yet managed to get through the morning without reviewing the headlines online from The New York Times, The Washington Post, and Huffington Post which I do to know what dangers I might need to prepare for that day. It must be a survival instinct. I can’t seem to stop myself even though the result is a knot in my gut that doesn’t unravel until I have completed 90 laps in the Community Center pool. Since Trump came into office, I have lost my appetite and at least five pounds.

I know that there are people, lots of people, with personal problems and responsibilities, places they need to be and things they need to do just to survive. They do not have the luxury to stay in bed until their courage kicks in to face the day. There are lots of people being directly hit by the mayhem and chaos in our world: families whose homes were demolished by tornadoes; recent college graduates living in their parents basements, up to their eyeballs in debt; people kicked off Medicaid with no health insurance, on and on. I am living in the liberal bubble of Massachusetts and I am now eligible for Medicare and Social Security. I am in the position to bear unflinching witness to the shitstorm that is swirling across our planet. I consider “Deadline White House” on MSNBC hosted by Nicole Wallace to be my support group. I watch religiously Monday through Friday at 4 p.m.

I wonder about how everyone else is coping. I was just at my local library to pick up a book that I had ordered entitled The Last Hours of Ancient Sunlight: The Fate of the World and What We Can Do About It by Thom Hartmann, published in 2004.  I was not aware of the subtitle when I ordered the book and I said to the woman at the counter, “I won’t be taking this book,” then read the subtitle to her. “This is dated; obviously it is too late now,” to which she replied without a beat, “Yes, we’ve missed that window,” and we smiled knowingly in a stricken way. We both acknowledged that it is too late to reverse climate change and then went about our business.

Earlier in my day while in my car, I turned on the radio and listened to Marketplace Tech. A sci-fi author was being interviewed about his latest book that deals with asteroid mining. He said that last year’s UN Intergovernmental Panel on Climate report which concluded that we have no more that 12 years (now 11 years) to avert catastrophic climate change, spurred him to come up with a solution. His big idea (that would necessitate the backing of billionaires) was to create colonies in space where humans will live by mining asteroids for their minerals and water.  He said asteroids have “all the resources we need.” He imagined a new “economy of space” and that we needed a “human presence in the solar system.” (The one thing we don’t need, I thought.) He assured the listeners that we would “build enormous and wonderful places to live” (smacks of a big beautiful wall). One of the interviewer’s concerns was whether we could pull this off within the “12-year window.” He assured us that all that the only obstacle is “psychological.”

I was incredulous as I listened.  To me this was on par with cryogenics where you freeze your body with the hope that a cure for the illness that killed you will be discovered and you can then unfreeze into immortality. Asteroid mining and colonies of human beings in outer space do not address a couple of fundamental issues, the most outstanding being how does this address the human-centric perspective that drives the destruction of our planet and all sentient beings? How does this “solution” address the fundamental flaws of human nature and our desperation to survive at all costs including the destruction of our home, Earth. Turning to technology to solve spiritual vacuity in humans has not worked. It has made things untenable.  We exploited our planet and now this author proposes that we exploit asteroids and outer space. And for what reason – because it is necessary that human beings above all else survive?  This makes my blood boil.

My 87-year-old friend, Mary, tells me that I have kept the door open to the outside world. Hers is shut, she claims, but then again, her serious health concerns and the realization that she has to move from her home to an assisted living facility requires focus on herself. One friend tells me that Trump will not prevail and then gushes about Mayor Pete. “A born leader,” he declares. I ask another friend for inspirational reading and she lends me her copy of Perseverance by Margaret J. Wheatley. It does address my dread, thank you.

My oldest friend from Brooklyn and her husband, now living by the ocean in California, deal by getting lost in nature, embracing the beauty. I find myself watching programs on astronomy and get relief by knowing that there are galaxies and universes, perhaps an infinite number, and that our planet is a bleep in space and time. I should get a telescope and peer into the cosmos every time I start freaking out. More and more people tell me that they have stopped watching the news. They can’t take it anymore: it just fucks up their day. Better to get online at Theory Wellness, our brand spanking new recreational pot shop.

I’ve come up with a possible solution and it also involves asteroids. How about one massive asteroid heading in our direction and knocking us all out. Instead of a long drawnout or not so long global devastation filled with unrelenting suffering, let’s have an instantaneous end. Everybody could go together. How about an asteroid that targets just the White House?