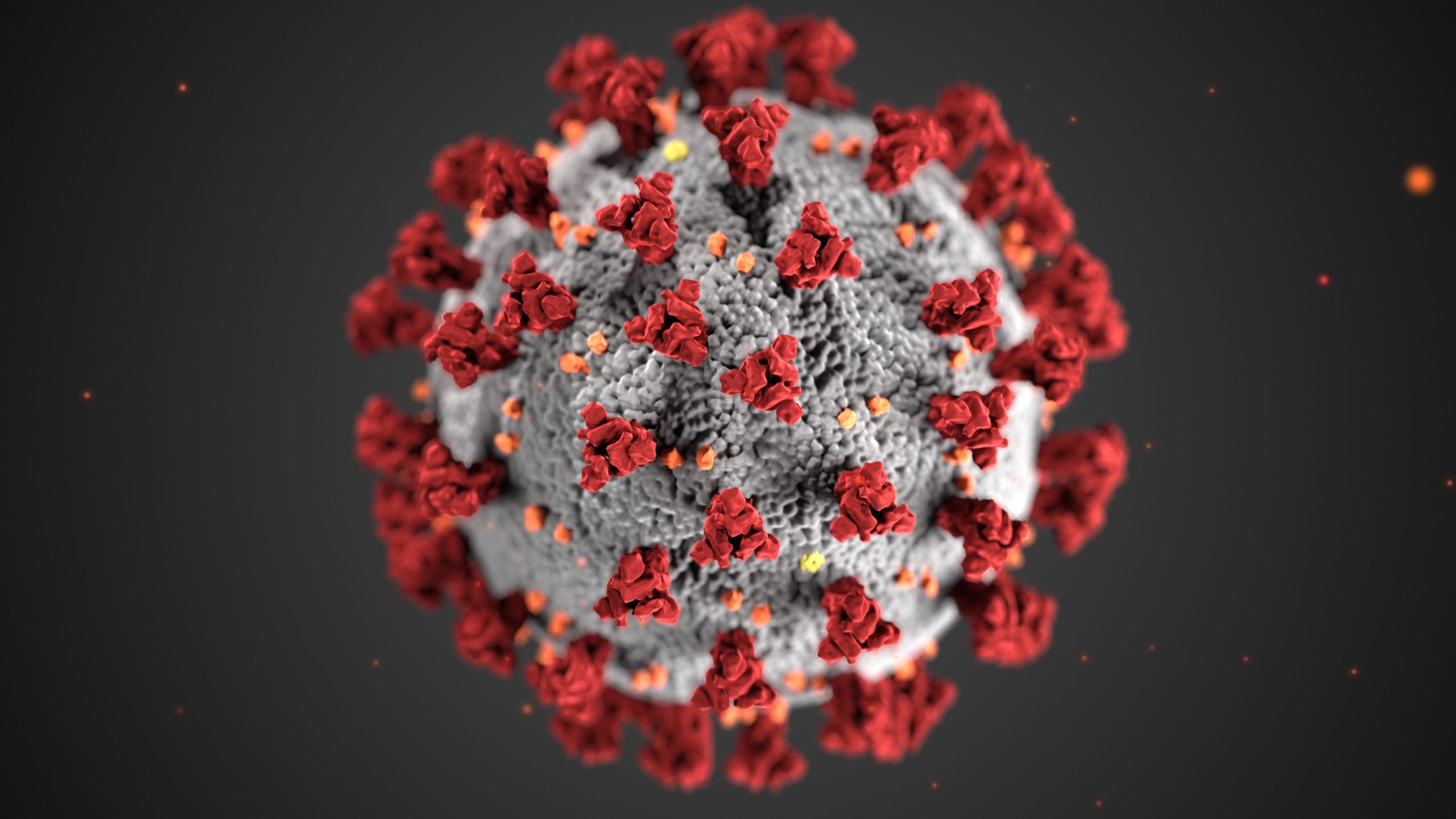 This illustration, created at the Centers for Disease Control and Prevention, reveals ultrastructural morphology exhibited by coronaviruses. Note the spikes that adorn the outer surface of the virus, which impart the look of a corona surrounding the virion, when viewed electron microscopically. This is an artist’s construction with color added for clarity. Image courtesy CDC

The March 12 issue of Nature has two dense scientific articles on the discovery of SARS-CoV-2. Though most of the data were already available, the narrative, all in one place, is gripping. The first article describes a 41-year-old man who was seen in the Central Hospital of Wuhan on Dec. 26, 2019. He had been sick for six days and reported fever, chest tightness, unproductive cough, pain and weakness. He did not have influenza. He needed help breathing and had abnormal lungs on chest X-rays and CAT scans. About 12 days after the appearance of symptoms, he was transferred to intensive care.

His physicians did a bronchoalveolar lavage; they put saline deep into one lung and recovered 200 microliters of wash fluid — about four drops. The researchers hoped to find a virus, and they did —about 100 million particles. Virologists and biologists are used to large numbers, but 100 million in 0.2 ml is a lot of virus. The paper did not say whether the patient survived.

The team sequenced the genome of the virus and made it available to the world in mid-January. Virus genomes are made of four nucleotide subunits: A, C, G and U. In a certain order, they code for the proteins that make up the virus. When the scientists in Wuhan sequenced the RNA in their sample, they found one type of virus with almost 30,000 nucleotide subunits, and from that sequence, they learned that they had a new and very dangerous coronavirus. They also knew that the virus had made its way into a local indoor fish and seafood market where their patient had worked. In extensive computer comparisons — a kind of “23 and Me” for viruses — they learned that the new virus is most closely related to a bat virus that had been found in a cave. The market also sold live hedgehogs, badgers, snakes and doves, and the new coronavirus may have infected one of these species before it jumped to humans.

By the middle of January, the novel disease had started to spread rapidly, eventually affecting more than 100,000 people and killing thousands. Hospitals were overwhelmed, despite the efforts of the authorities to create new hospitals and declaring a stay-at-home policy to break the chain of infection. At first there were not enough supplies, nurses or physicians to treat all patients. That is the situation that the United States and other countries may soon be in.

Epidemics have been studied for a long time and mathematics has made its contribution with a factor called R0 (pronounced “R naught”). It describes the number of people a single patient infects. With measles, R0 is very high: 12 to 18. Think Disneyland. SARS-Cov-2 — the so-called coronavirus –is less infectious than the measles virus, and its R0 is estimated to be 2 to 3, which is worse than R0 for influenza, which is about 1.3. An R0 value above 1 means that an epidemic will expand. Reducing R0 to 1 lets the infection smolder in the population. Reducing it to less than 1 drives the virus to extinction, as happened with the first SARS virus in 2003. That is the idea behind sheltering in place, hand washing and personal protective gear.

In the medium term, there are better prospects. Most RNA viruses need a unique enzyme to copy their genomes and make new viruses. They also make a few large proteins and then chop them up to make smaller proteins. Two unique enzymes carry out these steps: an RNA polymerase and a protease, neither of which is present in uninfected human cells. Inhibitors of the enzymes in HIV and hepatitis C, which are also RNA-based viruses, have essentially cured these diseases. A recent report in the New England Journal of Medicine tested two inhibitors that work against HIV against SARS-CoV2, but these failed to stop it. There are many other inhibitors to try.

Recent reports from China and France suggest that a combination of chlororquine, an antimalarial drug, and azithromycin, an antibiotic, stops coronavirus reproduction. These reports described small tests and the combination may yet work. These drugs should not be promoted as an answer to the epidemic. For the moment, these results are too thin a reed to grasp.

The ultimate test is a vaccine and a number have entered phase 1 trials, where they are tested for safety, dosage and the immune responses they provoke. They usually present humans with a coronavirus Spike protein, the role of which is to bind to human cells. It will take at least a year to complete Phases 2 and 3. There will be pressure to speed the process up. That involves risk, but it may be inevitable.