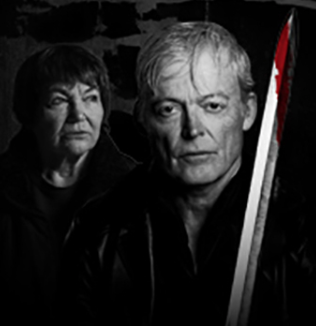 Allyn Burrows as Coriolanus, Tina Packer as his mother Volumnia in the workshop presentation of Shakespeare's 'Coriolanus,' opening August 21 at Shakespeare & Company in Lenox, Mass.

Lenox — Director Daniela Varon says that in the ordinary course of events, Coriolanus is not as often played as other Shakespeare tragedies, but in times of economic and political distress, it has become a go-to Shakespeare experience. Coriolanus is a personally rigid war hero, whose mother, Volumnia, seems to have spent most of her waking hours since his birth pushing him to greater and greater heights — no matter how dangerous they are. 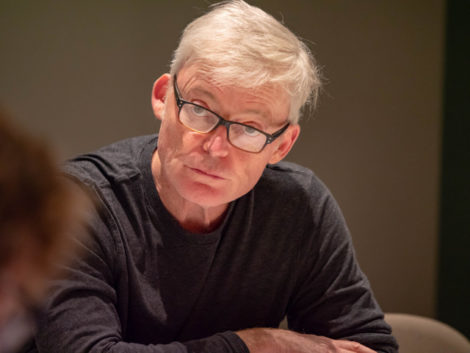 The play takes place in the early days of the Roman Republic, and she counts and broadcasts his battle scars as modern mothers might constantly refer to their sons’ academic, business, or sports achievements. After one of his war campaigns, she jumps on the bandwagon for Coriolanus to become a Consul (similar to a prime minister) in the middle of serious grain riots. 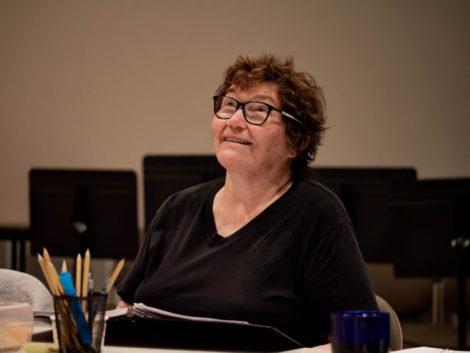 The problem is that he himself is an autocrat, who resents pandering to the crowd. Others push him from many sides, but among Patricians and Plebeians, friends and foes, more than one character remarks that the only person who seems able to talk Coriolanus into anything is his mother. He fights her, but she wins.

Who better to instruct me about the up-coming iteration of Coriolanus at Shakespeare & Company in Lenox than its director, Daniela Varon? Her generosity to me in my quest to learn is amazing. In the midst of precious rehearsal time, she meets me in a corner of the lobby at the Elayne P. Bernstein Theatre building because the rest of the building’s many spaces are already being used for development of other productions as well as Coriolanus: the enormous costume shop and its huge inventory, set construction workshops, rehearsal rooms. The people involved are actors, students, designers, set builders, technicians, artists of all kinds. She is obviously pleased to have been asked to direct the Coriolanus Workshop Performances from August 21 through the 25. In them, the actors will be reading their parts while moving around a “surprise set” that is so secret that my peeking at it was out-of-the question. 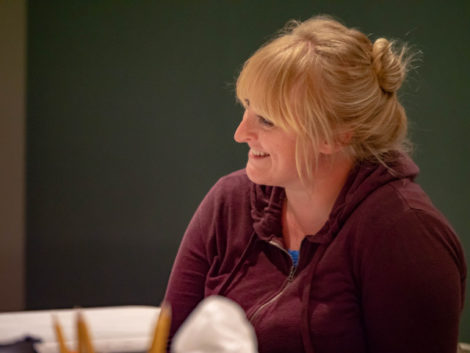 Varon is up to the challenge of creating these workshops. As she says in her Director’s Note: “Shakespeare’s Coriolanus is a man of contradictions and complexities: noble, valiant, heroic in battle… impolitic and immune to advice; capable of great loyalty to family, friends, country, and of equally great betrayal.” His relationships are amazingly fraught, none more so than that with his mother. As in any workshop, there will be time set aside for audience questions and comments, mutual exploration of the text and acting and directing choices. Varon tells me that three of her five actors (Allyn Burrows (Coriolanus), Tina Packer (Volumnia), Christopher V. Edwards (Aufidius) are also Artistic Directors, who relish the opportunity to act. Her other actors are Brandon E. Burton, a new company arrival, who is a third year MFA acting candidate at the Yale School of Drama and co-artistic Director of the Yale Cabaret, and Rory Hammond (Virgilia), who grew up in Shakespeare & Company and shows such a high level of expertise and branching out to other companies at such an early age that we can only guess at her very bright future. At the rehearsal they allowed me to attend, I watched all five prowl and growl, storm, maneuver and cajole. No fuss. Before my eyes, they simply became timeless ancients. 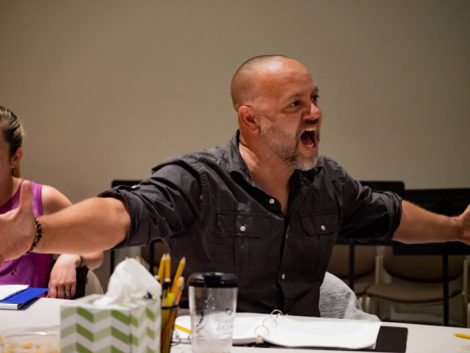 For now, here in our lobby corner near the piano, director Varon tells me that a mother-son relationship would naturally have been much on Shakespeare’s mind in 1607-1608 when the play was coming to birth because it was during that time frame that Shakespeare’s own mother had died. It’s been more than four hundred years, yet Shakespeare’s explorations of relationships among families, friends, and enemies remain valid, dangerous and fascinating.

We move to a large, high ceilinged, windowless rehearsal room where actors and others straggle in to work. Govane Lohbauer, the Shakespeare & Company costume guru, is delivering clothes for the show. They are spare, emblematic and suggestive of the characters. With a small cast playing many roles, these choices become very important. I came away with the impression of much iconic red. The actors not only read lines and try various choreography to bring their people to life, they pull on boots and hats, jackets and gowns that will help them to be who it is they wish us to see and understand. 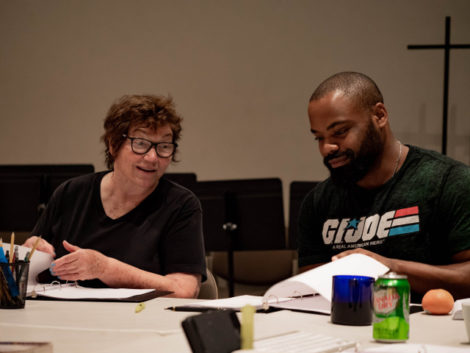 I’m jolted into realizing again the paradoxical power of theatre. These open-hearted men and women are busy pros, who matter-of-factly go about making fleeting realities they know will vanish even as they bring them to life. Unlike movies or video, theatre lives on only in the memories and imaginations of those who experience it as it is happening. Here at Shakespeare & Company, a group of people is preparing to give us the gift of Coriolanus, and I’m honored to watch a small moment of their serious labors. I can hardly wait for Wednesday, August 21, Opening Night when I will join a theatre full of other fortunate ticket buyers to share the ordinary/extraordinary revelations of one of Shakespeare’s infrequently performed, lesser-known plays.

Coriolanus is being performed in workshop from August 21 through August 25 at the Elayne P. Bernstein Theatre at Shakespeare & Company. For tickets, visit the Box Office at 70 Kemble Street in Lenox, call 413-637-3353 or go to SHAKESPEARE.ORG.  The Special Event Performance on Sunday, August 25th is Sold Out.

— George Orwell
Read next: REVIEW: Barrington Stage's 'Fall Springs' is a cartoon, and not a good one