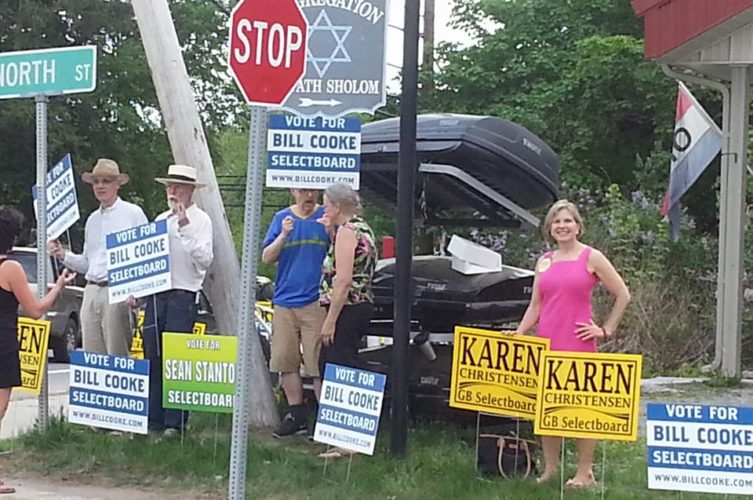 Great Barrington — Selectboard incumbent Sean Stanton along with Bill Cooke, newcomer and husband of former board chair Deborah Phillips, took the two available seats in Tuesday’s (May 12) town election, beating out newcomer Karen Christensen in an election that had initially appeared to be politically driven by last fall’s crisis over the Monument Mountain Regional High School Renovation project.

Alas, this may not have been the case.

The fervor and message of what appeared to be a polarizing controversy did not seem to fuel election outcomes this time around.  Christensen gained attention last fall as an avid opponent of the school renovation — a campaign that centered on residents’ frustration with increasing property taxes and the inability of local incomes to keep up.  It was the issues surrounding the school renovation vote that propelled Christensen onto the ballet, she said.

“I think it’s a really significant affirmation that people want me to keep doing this job and I think there’s a lot to do and I look forward to working with those who are newly elected,” said Stanton in the Town Clerk’s office, after being sworn in. Stanton has been on the board for 7 years.

“I’m glad the campaign is over,” Cooke said. “I hope to do a great job for the town.”

“Election results are just in and I’m sorry to say that I lost this first campaign,” Karen Christensen wrote on her Facebook page.  “My nearest and dearest are relieved — 100 percent supportive though they have been. Congratulations to those who won today, and thanks to the voters of Great Barrington, and to my dear friends, neighbors, and supporters.”

Eugene Curletti, known as “Will,” and proprietor of Fuel Coffee Shop on Main Street, got 735 votes, beating out Patrick Fennell’s 391 by more than 300 votes to win one of two Finance Committee seats. Incumbent Walter “Bud” Atwood III took 682.

“This is clearly a mandate for the town about the way citizens feel, and I hope to work with everybody who got elected,” Curletti said, just after he was sworn in.

And in an upset on the Board of Health, newcomer Peter Stanton, at 618 votes, took the seat from Ron Majdalany, a long-time member, at 459 votes, a difference of 159 votes.

The exemption from Proposition 2 1/2 for the bond issue to remodel and repair the Dewey School building and property, now the Southern Berkshire District Court building, also passed, 538 to 413. The state will reimburse the town for all monies spent on the the remodeling.