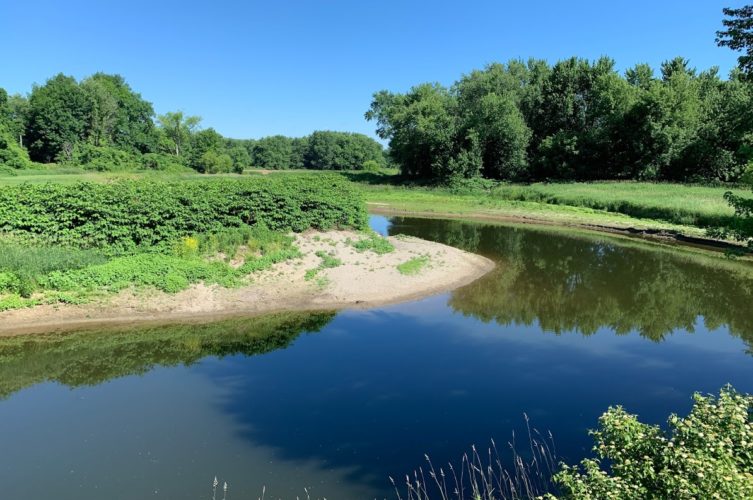 An oxbow of the Housatonic River as seen near the covered bridge in Sheffield. Photo: Terry Cowgill

Sheffield — Will a citizens’ petition initiative on the warrant for Monday’s annual town meeting protect the embattled Housatonic River as its proponents insist, or is it so vaguely worded as to invite a wave of frivolous lawsuits?

Officials are grappling with those questions after eyeing a proposal from a group calling itself Rights of Nature Berkshire, which is seeking to formally confer “rights” on the Housatonic River in order to protect it.

Click here read to the text of the proposed bylaw, here to read what RNB says about its own proposal and here to view its prepared document containing frequently asked questions.

Sheffield resident Sarah Natan of RNB said the petition garnered 30 signatures (it needed only 10 to get on the warrant) but she is confident it would have gotten far more if the timing had been better.

Natan circulated the petition in March, shortly before the pandemic-induced shutdown began and shortly after General Electric and the U.S. Environmental Protection Agency announced a settlement to remove polychlorinated biphenyls from the Housatonic as part of its Rest of River plan to clean up the river south of Pittsfield. She said the initiative had very little to do with GE and its history of polluting the river.

Asked in an Edge interview how an inanimate object such as a river could have rights, Natan was philosophical: “The way our judicial system works, either you’re a person or a thing. If you’re a person, you have rights and if you’re a thing, you can be exploited.”

“This is very similar to when women didn’t have rights or black people didn’t have rights,” Natan continued. “If they were hurt, then you would pay damages to their owners or their husband or whomever that might be. [The initiative is] drawing that comparison to how nature has been treated now. So it’s a little bit of a mind bender for sure.”

According to the text of the proposed bylaw, “existing regulatory systems, including Article 97 of the Massachusetts Constitution, are inadequate to the job of protecting our local ecosystems given the environmental pressures facing nature everywhere.”

As written, the initiative would only require governments and business entities to comply with the rights of the Housatonic River as established by the initiative. No lawsuits could be filed against individual residents. However, the town could be sued if it violates the initiative.

“Towns like Sheffield cannot be sued if they work within the contours of the law and refrain from violating the initiative,” RNB said in a statement. Natan acknowledged that the proposed remedy for alleged violations would be civil litigation.

Rene C. Wood chairs the board of selectmen in Sheffield and served as the town’s representative of the Rest of River Committee, which agreed to the settlement with GE and the EPA. That pact included a controversial dump in Lee for the disposal of PCBs.

Last week, as it reviewed the warrant articles for the annual town meeting, the Sheffield Board of Selectmen voted unanimously to recommend a no vote on the RNB proposal. The town finance committee refused to take any action on it.

“We can all agree that the thoughts behind this are good and they are exemplary,” Wood told The Edge. “It’s the implementation that’s rough.” Wood emphasized that she was speaking only for herself and not for the board as a whole.

Farmers are concerned that they might be targets of litigation. RNB’s proposed bylaw notes that the “Housatonic River has, over the last few centuries, been polluted and damaged by the runoffs of industry and agriculture.”

Selectman Bob Kilmer is a farmer who was elected to the board last month. He and his sons have 300 dairy cows on a farm in the Ashley Falls section of Sheffield. Kilmer’s operation, aptly named Twin Rivers Farm, encompasses land on both sides of the Konkapot River and it abuts the Housatonic.

“We have a very good conservation commission here in Sheffield and they take their job very seriously,” Kilmer said in an interview. “With the DEP and the EPA, the river is pretty well protected and I only see a lot of frivolous lawsuits coming from the petition. If every resident of Sheffield has the right to sue in the name of the river, it could turn into a nightmare.”

Like Wood, Kilmer admires the intent of the RNB initiative but is concerned that he and many others in town could become targets. Kilmer said he is careful to contain manure run-off and complies with state and federal law, but the ambiguous wording of the proposal would leave him vulnerable to costly legal fees.

Kilmer is convinced that the Housatonic is in much better shape than it was when he was a kid growing up in the ‘60 and ‘70s. In those days, he and his buddies only swam in the Konkapot because the Housatonic was filthy.

“I am fully for having the cleanest river we can possibly have,” Kilmer explained. “The river at that time was definitely nasty — just no two ways about it. Back in the ‘60s and early ‘70s, the river was just polluted … basically the rivers of the Northeast were the big toilet flush. There was sewage, waste from the mills.”

As for the river’s current condition, Kilmer said, “I am amazed at what happened as far as that river being cleaned up. It’s amazing.”

Natan insisted that it’s unlikely farmers would be the targets of the RNB initiative if it passed at town meeting and was enacted.

“I don’t think the manure would be a problem,” Natan said. “I think it would be more along the lines of pesticides and herbicides.”

But of course farmers often use herbicides to control invasive species. Kilmer also has a feed corn operation in Ashley Falls. To control weeds, Twin Rivers uses glyphosate, the active ingredient in the popular Roundup weed killer and the most widely used herbicide in the U.S. Bayer, the manufacturer of the controversial Roundup, recently agreed to pay $10 billion to settle a major lawsuit filed by cancer sufferers.

“Many of the farmers do use Roundup; are they now liable?” Wood asked. “If someone does some work in the river, if someone does erosion work on the river bank, if you put in a canoe, you could cause some erosion. Are we then off to court? This is stuff that’s done every day, so who decides?”

“Its intentions are great but I just don’t think this article is the way to go,” Kilmer said. “I don’t think it would hold up in court. It would put neighbors at odds with each other … we just don’t need that kind of turmoil.”

What if an aggrieved party disagreed with a decision of the town conservation commission, which enforces the state Wetland Protections Act? Could the town be forced to defend itself against a costly lawsuit?

Wood told The Edge the article has been handed over to town counsel Mark Reich, who will review it and likely will address any legal concerns at Monday’s town meeting. The annual town meeting begins at 7 p.m. in the auditorium of Mount Everett Regional School. Physical distancing guidelines will be observed. There are 24 articles on the warrant. The RNB initiative is the last one.

RNB has worked with the Center for Democratic and Environmental Rights, a Spokane, Washington-based environmental group that, according to its website, works to enforce Rights of Nature laws and believes the world “needs systemic change — one that addresses root causes: legal systems and cultural barriers that have purposefully separated us from nature.”

Natan told The Edge that Thomas Lindsey, the center’s senior counsel, is her mentor. Click here to listen to the podcast of a lecture Lindsey recently gave titled “Legal Rights for Nature: A Global Movement Whose Time Has Come.”

Mari Margil, executive director of the CDER, said in a news release of the Sheffield effort: “We are proud to partner with the residents of Sheffield to help advance this initiative. As governments around the globe recognize the rights of nature, the time has come for ecosystems and nature to take their rightful place in the highest protections that can be afforded under law. Sheffield is now leading the way in New England in securing these protections for a critical ecosystem.”