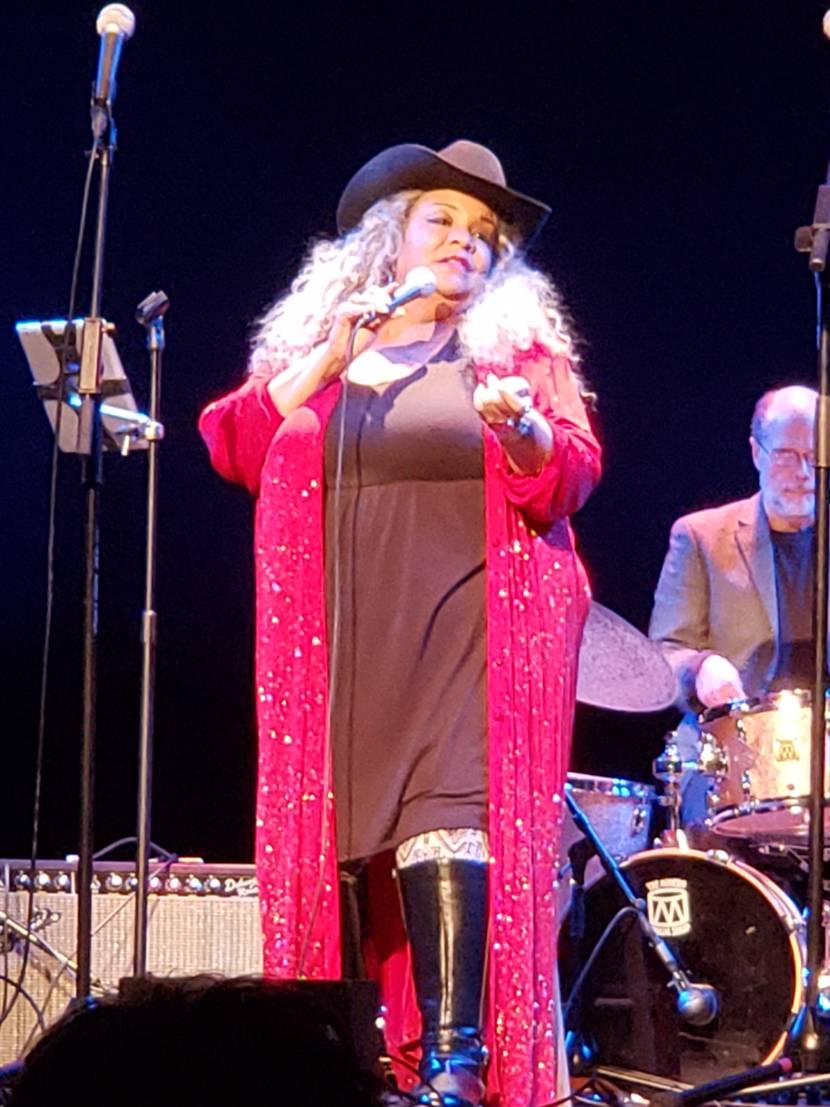 Wanda Houston, one of the many performers at Construct's 2019 Warm Up the Winter concert, held Feb. 11 at the Mahaiwe Performing Arts Center in Great Barrington to raise money for heating assistance. Photo: Rita Dichele

Great Barrington — On Monday, Feb. 11, folks gathered at the Mahaiwe Performing Arts Center to attend the musical event Warm Up the Winter, sponsored and hosted by Construct and co-sponsored by a multitude of local business and nonprofit entities (Volunteers in Medicine Berkshires, Berkshire South Regional Community Center, Music In Common, Southern Berkshire Chamber of Commerce, Railroad Street Youth Project, Fairview Hospital, Community Health Programs, Shakespeare & Company and Berkshire Playwrights Lab). A cabaret of sorts, the purpose of the event was to raise money for fuel assistance in south Berkshire County. There were several performances, all generously donated, including Wanda Houston and her band, who entertained a well-attended audience. It was a moving performance by all age groups with diversified talent. As Wanda Houston enthusiastically put it, “The Berkshires is a home to many talented individuals!” Jane Ralph, executive director of Construct, called it a “thrilling evening!”

The tradition of this event was actually started by one of the performers, Rabbi Deborah Zecher, as a result of her teaching bar and bat mitzvah students the importance of community service. It was Rabbi Zecher’s love of music and demonstration for helping others that this winter event came about. It’s Construct’s intention to bring back Warm Up the Winter every year, with Monday’sevent marking the beginning of many fundraising and celebrations for Construct’s 50thanniversary. For 50 years, Construct has remained a steady force in South County, providing folks assistance with affordable housing, housing stability, emergency financial assistance and transitional housing. Each year, they have sustained their organization through generous contributions, stabilizing 500 households in 2018. This year, 2019, is giving them opportunity to focus more than ever on the critical needs of those they hope to serve including help with fuel assistance.

According to Jane Ralph, there is a proven need in the community to help our neighbors pay energy bills on time to avoid shut-offs. When the fuel bill isn’t paid in a timely manner, outstanding debt builds up. When members of a household with an outstanding utility bill want to relocate, potential landlords are reluctant to rent to them. In many of these instances, household members are trying to get a rent closer to 30 percent of their income so that they can live more realistically within their means, making it possible to pay fuel bills on time.

Susie Weekes-Roeder, one of Construct’s main event planners, has found from her own personal experiences, “every time it falls below zero degrees, the fuel bill doubles.” Susie also shared that “the fuel bill is often the last to be paid by many households … people tend to pay other expenses first.” Subsequently, she added, “individuals can be faced with shut-off notices with no financial means to stop it.”

In the meantime, Danielle Goewey, Construct’s Project Home coordinator, has received several inquiries for fuel assistance during the 2018–19 heating season, averaging about one or two per week. According to Danielle, there are many challenges to helping households with energy bills. Many households’ problems are linked to lack of affordable housing, high fuel costs and low wages. Danielle works extensively withassisting individuals and/or households to find funds to prevent foreclosure, eviction and utility shut-off and can be reached at (413) 528-1985.

One significant problem worth noting is how to effectively budget for energy. Unlike other monthly living expenses, it can be difficult to know what funds to allocate for the energy bill given the uncertainty of the weather. Even though the 2018–19 heating season thus far has been 5 percent less than last year’s heating demands, we have more of winter to come. Weatherpersons can predict unusual patterns of cold weather, but we don’t know until it happens. The other problem is that we are at the mercy of energy companies’ changing consumption rates. For instance, the Energy Information Administration pointed out that Massachusetts heating oil increased 20 percent and 3 percent for electricity from the 2017–18 heating season. The hefty heating oil increase was due to the tightening of global oil supplies. Furthermore, the American Coalition for Clean Coal Electricity reported that the electricity rates increased by 33 percent since 2007 because of the Clean Air Act.

The energy companies set the rates, but it is consumer consumption, housing size, energy effect, and personal use that ultimately determine the heating season’s bill. An average household can pay $983 seasonally for natural gas; $2,359 for heating oil; $1,808 for propane; and $803 for electricity. The average household cost for energy consumption is about 7 percent of income. As a result, lower-income households tend to be more affected by energy costs rather than upper incomes. Furthermore, consumption factors can decrease buying clothing, food and gasoline.

Fortunately, Warm Up the Winter brought a deeper understanding for the need of fuel assistance in our community. Howard Lefenfeld, Construct’s designated donor relations manager, was thankful for the support from the community, calling Warm Up the Winter a huge success. He further shared, “My job is to create awareness for all of Construct’s good work.” Howard can be contacted at (413) 528-1985 for donations or event inquiries.

Warm Up the Winter was a collaborative effort and Construct and the co-sponsors wholeheartedly thank those who contributed as well as future donors—100 percent of ticket sales go toward fuel assistance for South County residents.

The final show piece was presented by all of the performers, each with their unique artistic style,  singing “Lean On Me” by Bill Withers, a song that expressed the overall evening’s theme of extending a helping hand to those in need. It was well-received by an enthusiastic audience’s standing ovation.

As Jane Ralph remarked, “It was “a community coming together to meet the needs of our neighbors.”