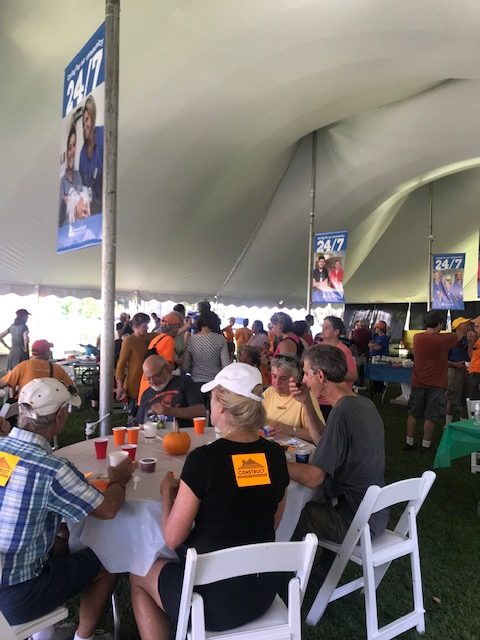 Great Barrington — Our long-standing neighbor Construct, a human service agency consisting of a highly visible group of individuals advocating for affordable housing and eliminating homelessness, should be applauded for a job well-done. Known in South County as unrelenting champions for creating affordable housing by believing it can happen brick by brick or step by step, they remain steadfast to accomplish their mission as they have been doing for 50 years.

Putting together an event like the Walk into the Future is no easy task, especially for a small organization such as Construct. Lisa Henriques, Construct’s operations manager and this year’s principal Walk event planner, worked rigorously to organize a group of volunteers who made it all possible. According to Lisa: “The volunteers worked hard and put in much time and effort; I typically have my regulars, who contribute year to year, as well as newcomers.” Lisa also mentioned, “I had the pleasure to work with local hospitality vendors whose generous donations provided refreshments to the walkers.” Furthermore, she worked with the town of Great Barrington: “I was able to negotiate successfully the use of the town gazebo as an end point for the Walk.” Finally, Lisa added, “Construct is also appreciative of Fairview Hospital providing the tents at the gazebo.”

As noted, this year’s walk generated a great deal of support and enthusiasm, with many individuals eager to share their reasons to Walk into the Future. Joan Peters, a Great Barrington resident and former Construct school intern, shared how she has continued her relationship with Construct after her internship ended and remarked, “It was such a wonderful feeling to be part of a community that supports Construct — walking side by side with my neighbors.” She also said, “I found this to be an overwhelming turnout and the volunteers working hard to make the Walk possible, which didn’t surprise me and made me feel well-supported in an organization I believe in.” Finally, Joan commented, “It was wonderful to see the Girl Scout and Boy Scout troops and other children walking with their parents.”

Katie Burns, a Sheffield resident and current Construct volunteer, said: “Something I really like about Construct is that they not only help with short-term emergency housing and long-term affordable housing, but they also teach skills for ongoing economic stability, giving seminars on budgeting as well as helping individuals get their GED.” Furthermore, she said, “I appreciate Construct’s vision which includes short- and long-term goals with innovation at its core.”

Casey Jones, a Great Barrington resident, local dentist, member of the First Congregational Church of Stockbridge, and enthusiastic Walk participant for the last six years answered Construct’s call to help make this year’s event more family-friendly by recruiting help from the local Girl Scout and Boy Scout troops to organize a scavenger hunt. Casey shared, “I’m afraid many people still do not know what great things Construct does for the community, so I felt a scavenger hunt could be a kid-friendly and easy way to share the facts about Construct.” In addition, Casey also organized the flash mob, a spontaneous dance that attracted all age groups to engage in a fun activity at the gazebo, celebrating the Walk into the Future event. Finally, Casey wanted to highlight the generosity of the First Congregational Church of Stockbridge not only in the number of members who participated in many ways, but in the amount they were able to donate to this cause. She shared that “Over $4,000 will be sent to Construct this year, and that amount includes a $1,000 match donated directly from the church itself.”

Rebecca and Joshua Hall, CubMasters of Pittsfield Pack No. 8 and Lee Pack No. 45 Cub Scout packs respectively as well as members of the Stockbridge Congregational Church, walked with their two sons, Andrew and Conor. According to Joshua, “Scouts are supposed to be part of helping the community, including those organizations in need.” Meanwhile, the Hall family, along with the other Boy Scouts, participated in the scavenger hunt, a first for this year’s Walk. It was hoped that this playful activity would result in greater awareness of the housing crisis among our community’s children. Rebecca said, “The Boy Scouts carefully placed signs around town so that drivers could pause and learn more about what Construct does.” Andrew Hall, a 10-year-old Arrow Light Scout, participated with his parents because he said, “It raises awareness for families in need.” Nine-year-old Conor Hall happily shared, “The biggest moment of the Walk: A stranger gave me a $2 donation for Construct while I was walking on Main Street.”

The League of Women Voters was in attendance, signing up prospective voters while supporting the need for affordable housing, a cause they do advocacy work for with state legislators. According to Sara Koffman, LWV member of South County’s local unit, “The League of Women Voters includes several Construct board members whose background and interests has helped tremendously in our non-partisan work.”

Meanwhile, the Construct board often remains behind the scenes. They should be recognized for making generous contributions with their time and efforts. Two members, Elizabeth Rosenberg (chair) and Anne Schnesel (long-term member), were at the Walk. Elizabeth, who has been involved in numerous Construct Walks, was impressed with this year’s turnout and wanted everyone to know: “Construct is so appreciative of the continuing community support for our annual Walk. All monies raised go toward supporting our mission of affordable housing for everyone in the south Berkshires.” Schnesel, who took a break from serving soup, shared: “My late husband, Ernie Schnesel, and I became involved in Construct 20 years ago. As we delved in, we realized how important Construct was and exactly who the people were that needed it. It was the people that we saw every day on the street, in the market and around town. It was our neighbors, and there is nothing more important than knowing that the people in your community have a decent place to live.”

The interchange shared so far would be remiss in content if Jane Ralph, executive director, was not acknowledged for keeping Construct’s mission on track and vision in sight. This was Jane’s third Walk and she reported with much pleasure the success of this annual event. Impressed with the turnout, she said it was, “Community getting together about something cared about.” She also said: “The importance of these annual Walks are critical to helping a large population in need. There are 500 individuals on a waitlist for affordable housing and 100 females on a waitlist for the transitional living facility with 75 men waiting as well.” Meanwhile, Jane has the difficult task of pulling it all together and believes, “without the outstanding effort from my staff, board, volunteers and community members, my job would be very difficult and Construct’s mission would not be fulfilled.”

Finally, Construct needs continued community support and welcomes volunteers, whether to help with fundraising events, office work, mentoring or GED tutoring. For more information, call (413) 528-1985 or visit Construct at https://constructinc.org. Construct wishes all the Walkers a huge thank you and looks forward to walking with everyone again.