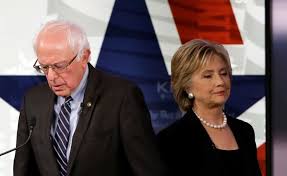 Turnabout is fair play. Since I wrote about the psychotic break in the Republican Party, I ought to say a word or two about the primary race in the Democratic Party.

As the Republicans demonize the front runner and deify the runner up — whom they formerly demonized — you might think the Democrats are smiling to themselves certain in the knowledge that even if the Republicans can get it together long enough to field a candidate, that candidate will be eminently beatable. But no, the Democrats have troubles of their own.

They are anxious: first, because this is a very odd year. It is unsettling that the pundits, the pollsters and the prognosticators are consistently wrong. In print and on air those paid to do so make suppositions that explain what happened yesterday and are contradicted by what happens next. Something is afoot and no one knows exactly what.

The two Democrats are attempting to run against one another without criticizing one another; to differentiate without rancor. In fact, in this most peculiar year, the Democratic candidates are channeling Ronald Reagan who said the eleventh commandment is: thou shall not criticize a fellow [party member]. Both would like to be running against the presumptive Republican candidate, but who is that?

Furthermore Democratic Party regulars are slow to step up and loudly support either one. Why? Who knows? For example, Elizabeth Warren’s choice would be obvious but not if she wants to be vice president. She could never be Clinton’s VP, but if Bernie were the candidate and Warren were his VP, then she would be the vice president of a man turning eighty in his first term. She would be a woman with an alternate path into the Oval Office.

Could a Socialist win? Well, the last Socialist candidate for POTUS ran five times between 1900 and 1920. Eugene V. Debs also lost five times. The fifth and final time he ran from jail. That means he had something significant in common with the first woman to run for president. Victoria Claflin Woodhull, who announced her candidacy in 1870, heard the returns from a jail cell. Debs was jailed for being in contempt of court; Woodhull for being contemptible.

Clinton is not in jail … yet …though they appear to be trying. If they succeed she will experience the same fate as her sisters who ran. Odd but true: a solution that leaps to the minds of those who want to defeat a woman is to jail her. On the other hand, the verbal criticism leveled at Clinton is very different than that leveled against former female aspirants. They say she is boring. Hard to tell if that is a step forward or backward from the time when women running for president were accused of being party girls, ladies of the night, and other euphemisms.

Further criticism is even stranger. Clinton is ready on day one. Clinton is actually qualified to do the job. She is the most experienced. Clinton paid her dues and earned the right to run for the highest office. No one contradicts the statements. They just sigh and say that, too, makes her boring. It has become a litany of values no longer cherished.

Sanders is not jailed either; he is free to try and catch Clinton.

Two very enthusiastic young men explained Bernie’s appeal: “If he is president, college will be free.”

They looked at me pityingly but indulged the old girl.

“I understand. You would attend college for free; who pays?”

“Okay,” I was patient, “The students don’t pay. Do the professors work for no salary? Do the utilities provide heat and light at no cost? Do the publishers give away the books? Because if they don’t; someone has to pay.”

They stomped off. What a drag when an older generation tries to bring down the dream. At a safe distance they turned and shouted, “Feel the burn/Bern.”

Whether he can do any of what he says or only create eight more years of dysfunctional government in gridlock, it is a movement. Occupy Wall Street participants, the overburdened Middle Class, and the generation of students who fear that they will not live better than the generation before — all of them have found the voting booth.

Also at a safe distance, say ten years from now, someone may be able to analyze how we got here and where exactly here is. That is, if we survive it, perhaps we will live to understand, Election 2016.