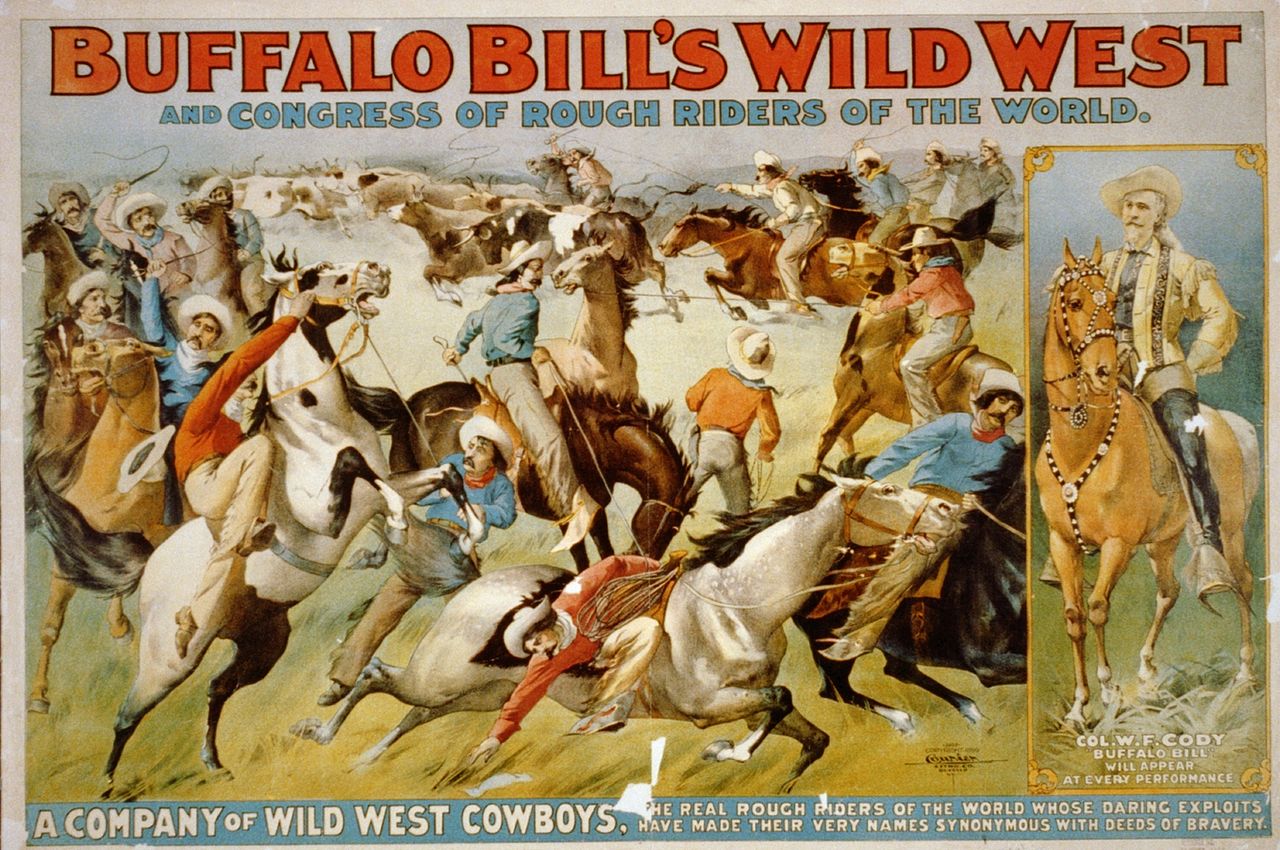 A poster for Buffalo Bill's Wild West Show pictures cattle being rounded up by cowboys as well as an image of Buffalo Bill Cody on horseback.

Impresario Cebra Quackenbush (1838–1914) would be pleased to learn he is still drawing an audience. Readers seemed interested in what happened next at the Academy of Music, so here goes.

The Academy stood on North Street Pittsfield from 1872–1912. During that 40 years, there was as much drama outside the Academy of Music as inside.

On the positive side, there was Buffalo Bill Cody’s Wild West Show. A date certain for the first performance on North Street is difficult to ascertain; however, it was after the disastrous debut of Cody as an actor in the play “Scouts of the Prairie” (1872), and the beginning of the triumphant tour of his Wild West show in 1874.

Quackenbush is credited with two suggestions that changed Cody’s theatrical career from bad to much better. Quackenbush made it clear to Cody that he was no actor. He told Cody to merely reenact actual events that Cody had experienced. Quackenbush also told Cody to take the entire show outdoors. Cody did, and there was a shoot ’em up, and roundup on North Street.

In 1903, the drama outside the theater was tragic. In March, the Bostock Wild Animal Show was booked into the Academy of Music for a week. At the end of the run, on March 28, two caged lionesses (Victoria and Sappho) were being lowered from an upper window to street level. The cage door broke open and the lions leaped out.

As Sappho tore down the center of North Street, the call went out, “The wild animals are loose.” The cry struck terror into the hearts of passers-by, and pandemonium broke out.

Back at the theater, two horses were hitched to a wagon, ready to transport the lions to the railroad station. The workers watched in horror as Victoria attacked and killed one of the horses. Trainer Signor Arnoldo and a groom, armed with rifles, rushed forward and took careful aim.

Victoria was pregnant, and Arnoldo wanted to save her cubs. The lioness was shot; all six cubs were born alive but, unfortunately, they died just days later. One of the cubs was stuffed and it was reported, in jest or in earnest, that the cub “survived for at least 50 years” and the lioness ended as a rug.

On North Street, calamity changed to comedy. An inebriated man, James Roy, mistook Sappho for a dog and reached to pet her. It must have been a case of blind-drunk. Only her roar alerted Ray to his mistake and immediate danger. In reaction, he took his umbrella, and rapidly opened and closed it in front of the lion. Possibly more bored than intimidated, Sappho turned and walked away.

As a sidebar to the story, it is interesting how history reinvents as well as reports. The incident above was told by an eyewitness in the year of the great escape. Every decade or two, the newspapers retold it. With each retelling, details shifted. Ten years later, it was Ray running down the street while the lion stood watching. Still later, Ray opened his umbrella in the face of the “dog” first and for no apparent reason. Then he heard the roar and realized his mistake. Fifty years later, Ray was cold sober and his mistaking a lion for a dog was rendered understandable. You see, his friend Mr. Feeley had a great golden dog that he insisted upon grooming to look like a lion. Every spring Feeley had the dog groomed with shaved body, tufted tail, and long hair left uncut and mane-like around the head.

However incompatible the versions were in other ways, there was no disagreement about the end of the saga. Men gave chase, the lion was trapped in a garage and she was captured. However, before Sappho was captured, she sat content, chewing up $30 worth of tires (about $900 today).

The final event in the 40-year history of the Academy was the fire of 1912. It was a conflagration that destroyed a great swath of the Pittsfield business district. Three imposing buildings went up in flames: the Academy of Music, the Miller Building and a warehouse. At his retirement 25 years later, fire Chief William C. Shepherd remembered it as the worst fire in Pittsfield history.

Quackenbush still owned the Academy building, but it was managed by John F. Cooney. Live productions were no more and, in the theater, Cooney ran the “World in Motion”—that is, Pittsfield’s first movie theater.

Fire started in the clothing store around 11:40. The cold weather and high winds caused it to spread rapidly from the clothing store, where it started destroying all three buildings entirely, by morning leaving only smoldering rubble. The damage was estimated at $225,000 (approximately $6.7 million today).

The Miller Block, owned by Mayor Kelton Miller, was immediately rebuilt. It stands today. Refaced, it houses Juvenile Services. The theater was never rebuilt. Quackenbush died two years later at the age of 75.