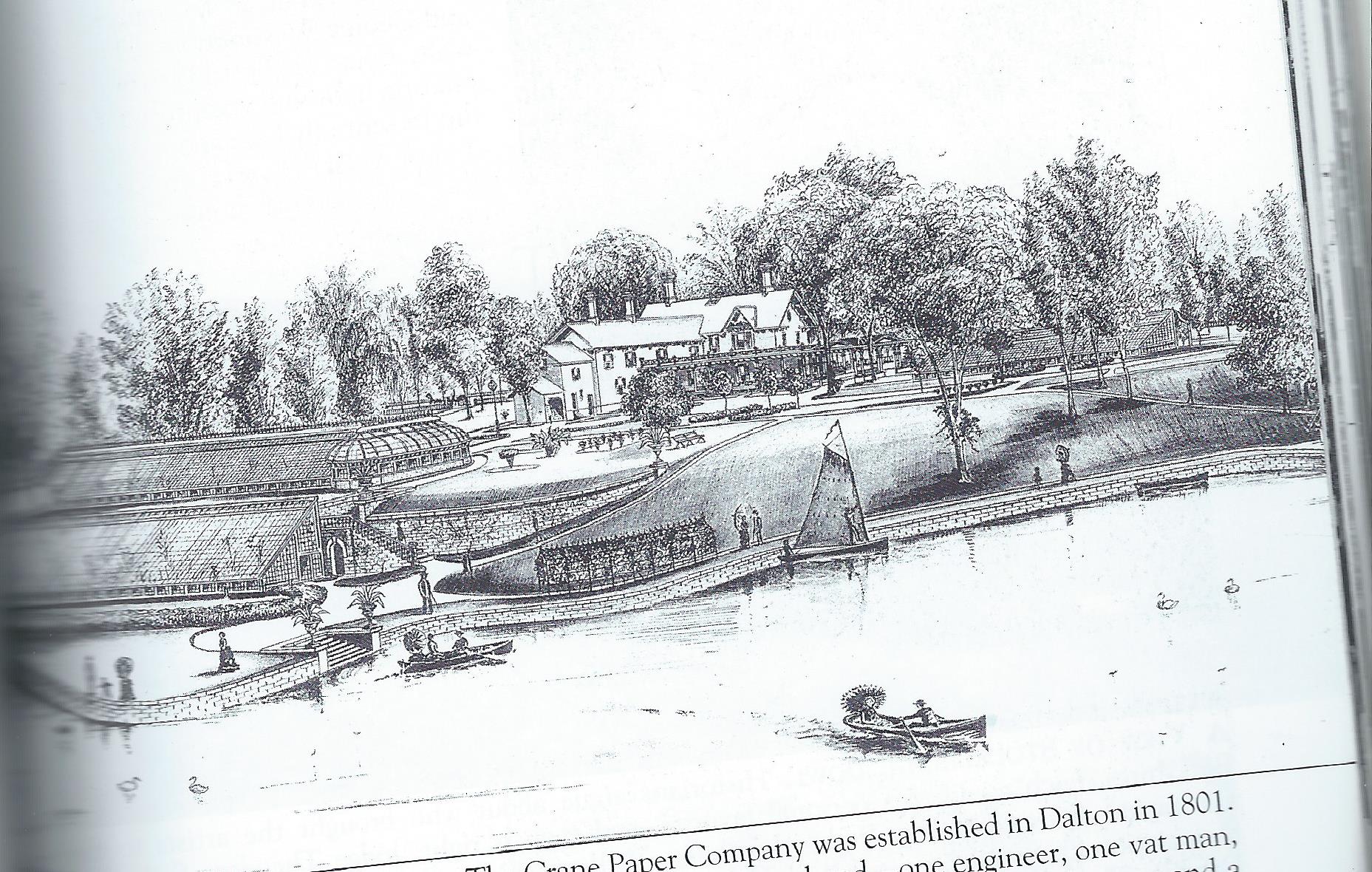 Making the paper money for the U.S. government was a lucrative business - the success can be seen reflected in the original Crane house to the evolution of the Crane estate. Image courtesy Crane Archives

There are stories about how Crane won that coveted contract. Some are true; some apocryphal. One has W. Murray Crane locked in a downtown Washington, D.C., hotel room. The government placed a deadline — date and hour — by which time all interested manufacturers must submit their proposals with paper samples. Crane traveled to D.C., but a competitor locked Crane in his room to assure he missed the deadline. Crane made the deadline and won the contract. To explain how requires an understanding of architecture in the world before air conditioning.

To fight D.C. heat, architects created cross ventilation. Cross ventilation in a hotel room with windows on just one wall was tricky. The problem was solved with a transom. A window was installed above the door to the hallway; open the transom and the window opposite and — voila! — cross ventilation. For 26-year-old Murray Crane, that transom was an escape hatch. He stood up on a chair, wriggled over the transom and out of his locked room. The rest, as they say, is history.

It was the beginning of rapid and permanent expansion for the small manufacturer in Dalton, Massachusetts. When Zenas Crane founded the company in 1801, he could figure the payroll on the fingers of one hand — one engineer, one vat man, one coucher and a general helper. In the 1820s, the cylinder machine replaced hand forming of paper, and the Crane Paper Company grew to 27 employees. Employment jumped to 66 when, in the 1840s, Crane manufactured the paper for bank notes. The Civil War shrunk the staff to 55 and almost put the company out of business. It saved itself by manufacturing paper collars, a fashion trend for men. Murray Crane’s success in 1879 moved the company from 55 to 500 employees and from one to five mills.

Exactly why such a small, out-of-the-way business won the competition and became the single manufacturer of all the paper for the nation’s money is not known, but that doesn’t stop speculation. In 1770, Stephen Crane founded the Liberty Paper Mill outside Boston. Possibly his intent was to facilitate the advice of Benjamin Franklin: “Make recollections as durable as possible by putting them down on paper.”

One story has it that Crane’s friend Paul Revere wanted to create a currency to pay the Revolutionary War soldiers, and Stephen volunteered to make the paper. Hence a Crane was associated with making paper for money from the birth of the nation. Nice, but there is much wrong with this tidy tale.

In many versions, this paper-making friend of Paul Revere is called Thomas Crane. There is no Thomas Crane on the Zenas Crane family tree. Stephen was Zenas’ brother and a paper maker. When Zenas decided to found a paper mill, he traveled far afield. He chose Dalton, 130 miles from Boston and unassociated with Stephen’s business. A better guess about why Crane Paper of Dalton won the contract is women’s undergarments.

Early in his career, Zenas placed ads in the Pittsfield Sun newspaper asking women to give him their old, even tattered, undergarments and night gowns. To do so in Dalton, Massachusetts, in 1806 was scandalous. Crane learned his lesson and replaced the ad with one that read as follows: “Americans! Encourage your own manufactories and they will improve. Ladies, save your RAGS.”

The connection between supporting local manufacturers and saving rags may not be immediately apparent to us, but it was to Zenas Crane. He was making a decision that would secure Crane Paper’s success for over 200 years and more than seven generations. He was not the first, but he would be one of the most successful to make paper from cotton and linen rather than pulp.

In 1769, the Boston News Letter printed a similar ad asking for rags: “Rags are as beauties…when in paper how it charms the eye.”

For the next 100 years, people agreed, adding cloth made a finer paper. In the 1880s, the Queen of Rumania concurred; “Those pieces of rag be quick and bring! Those dusty old shreds are just the thing, For pulp for pulp…”

In Dalton, odds and ends of the family wardrobe may have been looked upon as useless. In 1806 Crane wanted every scrap. Why women’s underwear? Crane assumed they would be made of the finer cotton. Why Granny’s nightie? Crane assumed it would be made of linen. Zenas made cotton paper for local and regional banks. In 1844 Crane developed a method to embed parallel silk threads into the banknote paper to dissuade counterfeiters.

By the time Murray Crane got to that hotel room in D.C., Crane Paper had a product that was a special blend of cotton and linen and gave the paper a unique “hand.” Remember the paper samples presented with the proposal? Crane paper had that distinct feel that everyone, from that day to this, associates with American money. Most probably that won the contract. It gives “rags to riches” a whole new meaning.

In 1879 Crane Paper Company secured its most illustrious customer — the United States government. No matter where the buck stops, it starts in Dalton, Massachusetts.