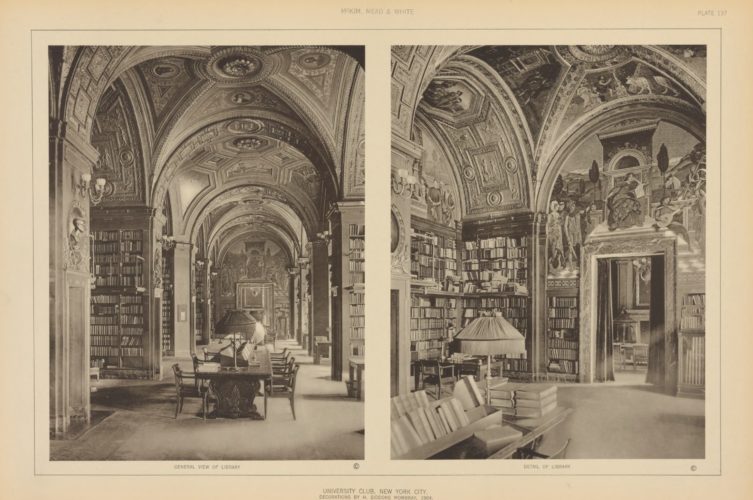 The University Club of New York's exquisite library (in 1905)

“Turning and turning in a widening gyre, the falcon cannot hear the falconer.”—W. B. Yeats

Once, America was a smaller country. At the close of the Civil War, the population of the United States was 10 percent of what it is today; not 325,000,000 but just over 30,000,000. Fifty years later, by World War I, the population of the United States was one third of what it is today – just over 100,000,000. Between those wars was the Gilded Age: a half-century of American life that had a profound effect on our nation’s history. It changed us from an agrarian economy and a “third world” country to an industrial power with a seat at the international table.

The Gilded Age also had a profound effect on The Berkshires. As many as 93 Berkshire Cottages – a.k.a. great estates – dotted the county. From a few in Williamstown to a handful in Tyringham to a major concentration in Pittsfield, Lenox and Stockbridge, the sprawling estates of the Nouveau Riche ostentatiously supplanted the modest farms and homesteads of the century before. Berkshire County became the land of second homes, peppered with inns and taverns to accommodate the increased travel and custom.

In that same 50 years, a New York City social club was formed and commemorated: The University Club was founded to celebrate “the union of social duty and intellectual life.”  After a shaky beginning in 1861, the club was chartered in 1865 for the “promotion of literature and art” and became one of the most prestigious in the city. Then there were its members — there was always a link between the Berkshires and New York, the first president of the Club having hailed from a proud Massachusetts family, Timothy Dwight. In 1879, Charles Follen McKim was a member and the architect of the clubhouse, as well as many Berkshire Cottages.

The clubhouse is a nine-story, granite-faced Renaissance Revival structure containing three main floors with a reception area in the first story and a dining area attached to an outdoor roof deck on the seventh. On the fourth floor is one of the largest privately held libraries in the city. There are various mezzanines with bedrooms and club rooms in addition to a bath and swimming pool in the basement. The clubhouse is listed on the National Register of Historic Places and is a New York City designated landmark.

Joseph Hodges Choate (1832 – 1917) was among the charter members, literally members whose names appear on the 1865 charter. Choate, a prominent lawyer, ambassador to the Court of St. James, Berkshire cottager, and grand old man was one of just three charter members still alive for the Club’s fiftieth anniversary. He took up a pen, and in writing a letter of appreciation for the book, History of the University Club of New York by James W. Alexander, drew an accurate picture of New York City life in 1915. Accurate, that is, if you belonged to the upper classes.

“July 22, 1915, from Naumkeag, Stockbridge MA. 1865 – 1915—fifty years of most hustling and exciting history…both the City and the club… The War was just over when our Charter was obtained on the 28th of April 1865, the very month in which Lee surrendered to Grant at Appomattox, and the tragical death of President Lincoln occurred. The city and its citizens were very poor. The university men in the City were comparatively very few… [it had] a noble and ever growing career. Its Presidents, one after the other, have been true representatives of the university men of the City. Its membership has consisted of the cream of the graduates of all the colleges, and I do not hesitate to say that it stands foremost today among all the clubs of the City for its character…       “Its high standard of admission to membership has been steadily and scrupulously maintained, and its Library is not only choice in the character of the books it contains, but is a most peaceful and refreshing place of retreat for all who wish to read or to study…You have set forth with delightful interest its various places of abode… to its present magnificent and costly building at the corner of Fifty-fourth Street and Fifth Avenue, one of the great triumphs of the architectural skill of our fellow member Charles F. McKim [who also was the architect for Choate’s home, Naumkeag], which I hope it will continue to occupy a half century to come [The Clubhouse, in excellent condition, is now 123 years old]…Its surviving founders will soon disappear, and at the end of the half century almost every one of its present members will be gone to his last sleep, but the noble institution which has been bult up will survive, and as I believe, will in the future, as in the past, add much luster and glory to the character of our great metropolitan City…It is pleasant to learn from your pages that many great and flourishing clubs through the land have been its natural offspring and imitators, and that so it has had a very considerable national as well as municipal influence…I believe that the lofty character which it has cherished until now will be steadily maintained, and that scholars and authors and all other choice university men will always seek admission to it as their natural and proper home…Thanking you again for the immense labor and trouble which the production of your book, so worthy of its great subject, has involved, I am, my dear Mr. Alexander, Most truly yours, JOSEPH H. CHOATE”

Choate got his wish: the University Club building still stands, and the membership is strong and growing. In the 1970s, more than hundred years after it was founded, and obviously in no great hurry, the Club began to admit women. I was among the first. So it is that I am a member of the same Club in New York and live on the same street in the Berkshires as Ambassador Choate. New York City and Boston are both 135 miles from South County. Boston and the Berkshires are in the same state, and yet the connection between New York City and The Berkshires was always stronger. There is a reason for this, buried in history, a story for another day.

The Edge’s new print magazine Out and About will carry an article about The Berkshire Cottages in its May-July issue. During May, Connections will tell stories of the Cottages we all know by sight, yet whose secrets remain largely undivulged.  Print copies of the magazine are available at high-traffic locations throughout the Berkshires.  To see the digital version, click here.