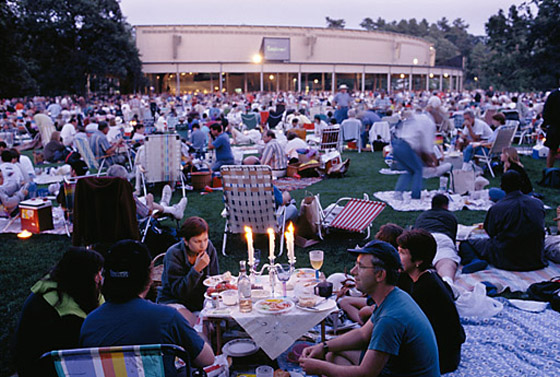 Cue the clearing sky. Key the strings. Downbeat and commence a perfect night at Tanglewood. I have lived three minutes from Tanglewood for over 30 years. I have spent countless nights on the grounds. Why did Aug. 7, 2018, stand out as better than all the rest?

It may have been the weather. It cleared on cue so that the day was wet and the concert was dry — a bit of magic. On the other hand, it wasn’t the weather. The humidity made it more tropical than a quintessential Berkshire summer night.

It wasn’t the administration. When Gertrude Robinson Smith started the Berkshire Music Festival, she chose the New York Philharmonic as the orchestra — or, rather, it chose her. You know the story. Maestro Henry Hadley, hat in hand, approached Robinson Smith with his idea for a summer music festival. The great undertaking started in the depths of the Depression; nonetheless, it was an immediate success. The unmatched charm of the Berkshire summer music festival — of “concerts under the moon and stars,” of the blend of art and nature — was always there.

It was years later when the Boston Symphony Orchestra was selected. It was later still when the property called Tanglewood was given to the BSO and the war began. That is, both World War II and the battle for supremacy between Stockbridge and the BSO. The BSO won. With building, reconfiguring the parking and ignoring the regulation against overcrowding they have done what they could to destroy the delicate balance between nature and the arts, but, so far, the beauty has held.

It was the music. Perhaps the atmospherics enhanced the sound. The solos were exceptional — special mention for the clarinetist in “Rhapsody in Blue.” The selections were so unabashedly romantic: Tchaikovsky’s “Romeo and Juliet,” Ravel’s “Daphnis et Chloe,” Gershwin “Nice Work If You Can Get It” and “Rhapsody in Blue,” three selections from John Williams, and the “1812 Overture.” Heaven. And yet it was not just the music. There have been great music and musicians and world-class conductors at Tanglewood before.

Oh well, maybe it was the combination of the weather clearing on cue and the concert as beautiful as the setting combined with meeting and greeting friends. Maybe it was the exceptional fireworks. There have been brighter and sharper displays, but the vision of the fireworks coming out of the fog, softened and blurred by it, was unique.

Maybe it was the great fun of sitting around the fire pit and telling ghost stories to strangers. Waiting, patiently waiting until everyone left, and the grounds were empty. Walking across the expansive lawn alone in the quiet night. Of course, it was all that, but there was something more.

Think about it. In this current contentious climate, there were 10,000 or more people gathered in peace and quiet demonstrating good manners and good grace. That was a snapshot of America as important and compelling as any “breaking news” about violence, corruption, or hate. For hours, thousands of people sat together respecting one another’s property and one another’s space, sharing and appreciating the experience.

Walking toward the tent at intermission in the dark, I perceived an inert body and whispered to my partner, “Don’t step there. There’s a person sleeping there.” It didn’t matter if it was a man or woman, black or white, brown, red or yellow, foreign-born or domestic, we carefully stepped around him/her. As laughter and greetings sounded all around us, a small voice came up from the ground: “Thank you.”