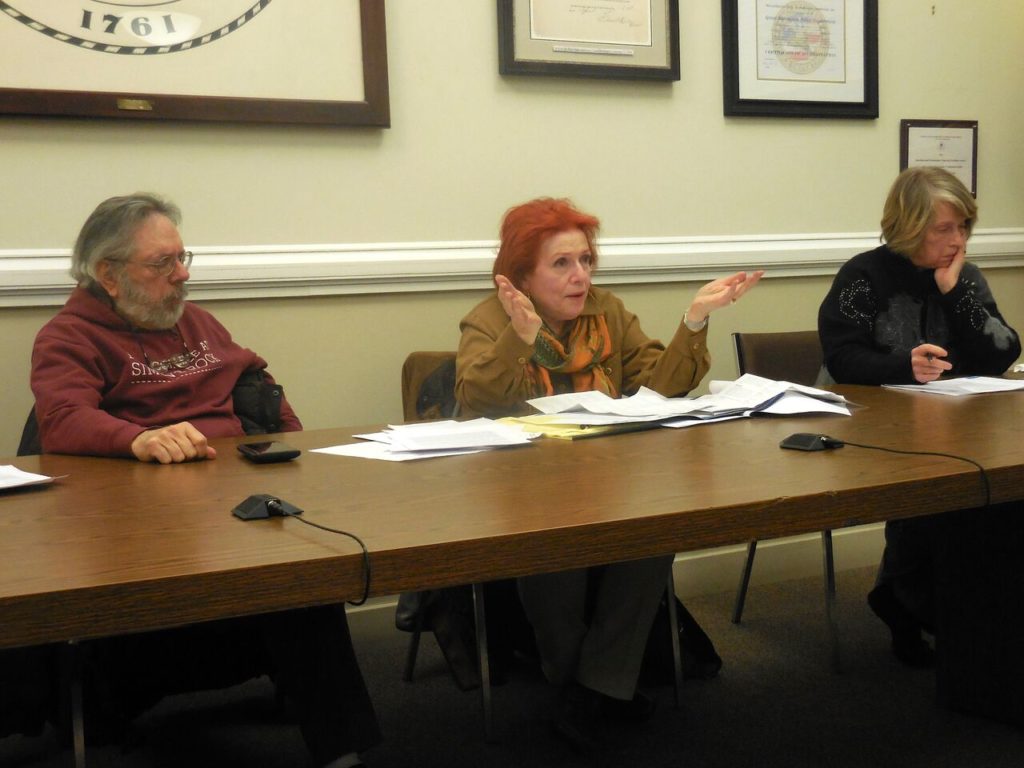 Linda Miller, center, chair of the Five Town Cable Advisory Committee at a December 2017 meeting. To her right is member Steven Moritz of Lee and to her left is Rene Wood of Sheffield. Photo: Terry Cowgill

Apparently, Berkshire County is not pleased with Spectrum.

“The decision to drop WCVB was the last straw for Charter subscribers, who, since the company acquired Time Warner Cable two years ago, had already been complaining loudly about rate increases and service changes.” (“Markey, Warren and Neal demand Charter restore Massachusetts channels,” the Berkshire Edge 6/14/18)

If that was the last straw, apparently the first straw was six months earlier: “encrypting its signal and insisting that its basic cable TV customers rent a decryption box for $6.99 per month.” (“Tensions flare as cable panel drops plans for lawsuit against Charter,” the Berkshire Edge, 12/20/17)

At the December meeting, the Five Town Cable Advisory Committee abandoned its strategy of taking Charter Communications to court over the practice. Instead, Lee, Lenox, Stockbridge, Sheffield and Great Barrington turned for relief to their elected representatives. Depending upon which they were trying to enforce — more channels or lower fees— that may have been a mistake.

According to the Federal Communications Commission website, “cable systems decide which programming to carry.”

However, with respect to rates, the local authority has a role. “Most rates charged by cable television companies are not regulated by the FCC. Cable television service is regulated by state-approved local franchising authorities, usually city, county or other governmental organizations. Your Local Franchising Agency (LFA) may regulate the rate your provider can charge for basic cable service, though there is no FCC requirement for such regulation … the LFA are responsible for enforcing a variety of cable television regulations including: rates for service and equipment, franchise fees, signal quality, service, and provision of public, governmental, and educational channels.”

Sentiment is that, since taking over Time Warner in 2014, Spectrum has consistently provided less for more. That double-edged practice requires attention from both legislators and the Five Town Advisory Committee.

Other points of contention have been: constant service interruptions in the five towns; and Spectrum’s neglect of its obligation to CATV (Community Access TV), the channel that provides mandatory public access, political and educational programming.

“Cable systems generally are required to offer a ‘basic tier’ of programming to all subscribers before they purchase any additional programming. The basic service tier must include most local broadcast stations, as well as public, educational and government channels required by the franchise agreement between the LFA and your cable company or medical company. LFAs may review any increases in basic service tier rates to verify that they accurately reflect increases in the cable company’s programming or other costs that cable operators are allowed to pass through to customers.Your LFA can enforce FCC rules and guidelines in the following areas: Customer service, including complaints about bills, as well as a cable operator’s response to inquiries about signal quality or service requests; Franchise fees paid to the LFA by a cable company for access to public rights of way to offer cable service.”

All of which means increases in costs must reflect — be justified by — concomitant increase in services. As rates rise, more channels, not fewer, must be offered.

Spectrum’s increases in cost and decreases in service coupled with ignoring contractual obligations may not have galvanized the attention of a majority of Berkshire citizens. But wait — if, this fall, Berkshire County is unable to see the Patriots’ games, then you will witness countywide revolt against Spectrum.

Unlike Time Warner, Spectrum does not offer a senior discount. One subscriber was caused to comment, “Spectrum is acting like a naughty fourth-grader who keeps taking other student’s milk money — petty crimes that demand endless energy to keep policing.”

Spectrum’s attention to what is good for the company regardless of whether it is good for the customer — that is, its singular focus on its own bottom line — has caused many cable bills to double. You might wonder: What are they doing with all our money? Wonder no longer; simply watch their myriad ads. Spectrum is “building an expansive fiber-optics network for the future … to make it and to shape it.”

That’s creepy. Do we want Spectrum making and shaping our future? Not to sound like the aluminum foil-hat boys, but will Spectrum be able to listen as well as project, watch as well as broadcast? Some may decide it is less important what Spectrum carries and more important not to carry Spectrum.

If so, here are some options: Direct TV, Dish, streaming TV with Roku, YouTube, Apple TV, and Verizon Smart TV (not yet available in Berkshire County). On the other hand, there is this: “How we got free Basic Cable TV — and it’s legal!!!” www.frugallivingmom.com. Click, read and good luck.