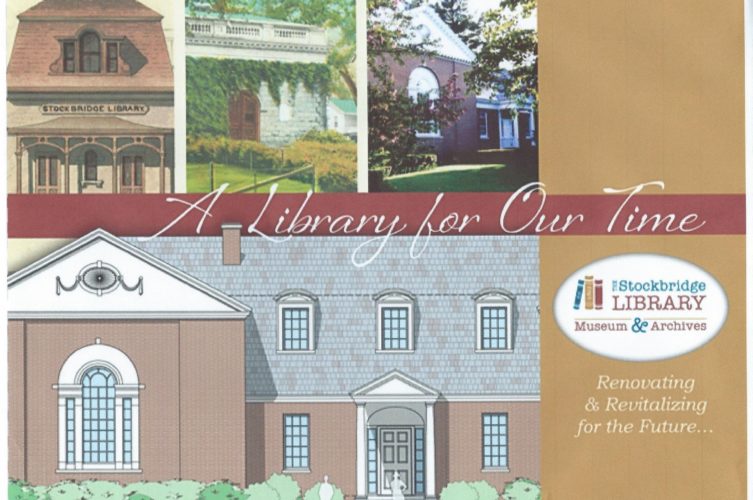 A green fence has been placed around Stockbridge Library and the clear message is: “Keep Out.” Odd for a public library to block the public from its door until you know the Stockbridge Library Association building is under construction, and not for the first time.

According to the organizational history of the library, Stockbridge had one of the earliest libraries in the Commonwealth founded in 1789 by 25 residents. During the next seventy years Stockbridge had three libraries; astounding for a village of its size. When the library was 75 years old, it built and dedicated a building.

January 21, 1864, The Valley Gleaner: “The new building erected in Stockbridge for the use of the Jackson Library, at a cost of $5,000, is now completed.”

Two years earlier, the estimated cost of $3,000 was optimistic and inaccurate. The story of where the money came from, however, is purported to be true. Strictly accurate or apocryphal, it is a good story, and most retailers call it: “The Bidwell Dollar.”

It was the summer of 1792. Barnabus Bidwell graduated from Yale and was in Stockbridge to study law under Theodore Sedgwick. Barnabus was the son of Adonijah Bidwell, the first minister in what is Monterey and Tyringham today.

Nathan Jackson was also from Tyringham, and like Barnabus, was studying in Stockbridge. Nathan, a boy of twelve, was attending the Stockbridge Academy.

Now on this summer day, Barnabus’ horse got loose. Rather than chase it, he engaged young Nathan.

“If you can catch my horse and turn it out, you might use it to ride home to keep Thanksgiving.”

The boy caught the horse.

The day before Thanksgiving, Nathan mounted the horse to ride home to Tyringham.

According to “A History of Williams College” by Calvin Durfee (1860), Barnabus asked Nathan if he had any pocket money.

Barnabus handed him a silver dollar. It was the first Nathan ever had.

Yet, according to Durfee, “he did not spend it to see shows, nor for rum nor brandy nor cigars, but bought a sheep with it. He put the sheep to double once in four years and kept on for forty years.”

Barnabus also prospered. He went on to a political career serving the county, the state and in the United States Congress. He was a favorite of President Thomas Jefferson and called by some in Washington “the Executive’s interpreter.”

In 1862 Nathan – now a man of means — was back in Stockbridge. Stockbridge apparently has a proclivity for accomplishing great projects in terrible times. Stockbridge residents created Tanglewood during the Great Depression and the Library during the Civil War.

In 1862, according to “A History of the Stockbridge Library” by Olga Wilcox, Nathan offered the town $2,000 for a library provided the citizens of the town would give another $1,000 and build an appropriate building.

The site chosen for the library building was the corner of Plain and Old Academy streets (Main and Elm streets today). The property belonged to Mrs. Dwight.

Mrs. Frances Dwight lived on the opposite corner. She had a gracious home (later the first Norman Rockwell Museum) and a bow window in the north face. Known as the Corner House, that house with that window afforded a panoramic view of Main Street. As Mrs. Dwight sat in her bow window, the life of the village passed in review.

Mrs. Dwight was “tall and of splendid appearance, pleasing and vivacious.” Mrs. Dwight also was deeply interested in activities on Main Streets and determined to have her way. She offered to sell the lot for a dollar provided the library building was set back on the lot so it did not block her view.

It was done. The library, set back from the street, served the village for 40 years. In 1902 the library was altered at a cost of $4,200. In 1937, Mary Bement gave funds for an addition to the library in honor of her parents. Opened in 1938, the new wing was designed to match the old, and a new lobby connected the wings. (Facing the building, the Bement wing was on the right.)

The story of the Stockbridge Library is the story of the character and values of Stockbridge. This most recent renovation and capital campaign is called “A Library for Our Times.” Hopefully, it will reflect not just modern times but also the old-fashioned values of the village and its villagers.

During the renovation, patrons will be served at the Stockbridge Train Station.