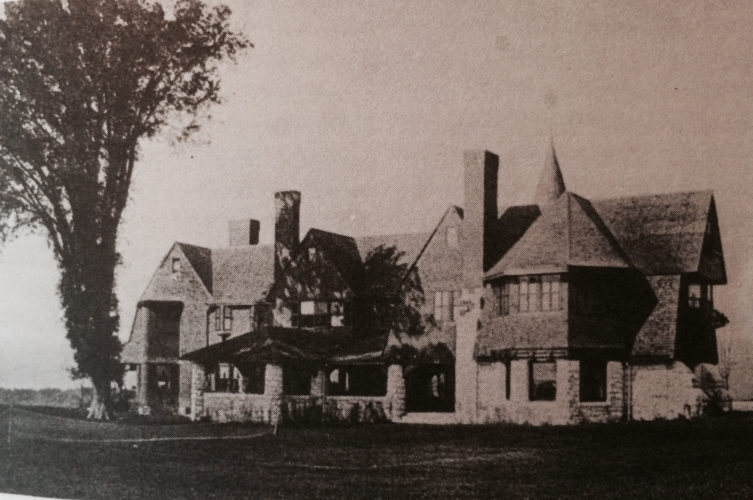 Elm Court, one of the best-known Berkshire Cottages, sold in the summer of 2012. For the first time since it was built, the majority owner was someone other than a Vanderbilt. The buyers, Front Yard LLC, who operate luxury resorts, paid $9.8 million dollars for the 50,000 square-foot home. Now they want to make it bigger.

William Douglas and Emily Thorn Vanderbilt Sloane built Elm Court. While there is an argument for Highwood, built in the mid-nineteenth-century, being called the first Berkshire Cottage, Elm Court was probably the best known and certainly at the vanguard of the Gilded Age Cottage movement in South County.

The Sloanes hired Boston architects Peabody and Stearns to design and build Elm Court. Some say the Cottage was completed in 1886, but, to be accurate, the penultimate completion date is 1899, and the workmen put down their tools for the last time early in 1900.

The dictionary definition of a cottage is: “a small rural dwelling, often a summer vacation house.” Like all Gilded Age cottages, Elm Court had little in common with that definition. In 1886, “Artistic Country Seats” by George William Sheldon was published. Sheldon included 93 country seats — worthy of the name Cottage — in his book. The costs of 58 are reported, and of that number, only two cost more than $200,000.

What did William and Emily get for the equivalent of $5.5 million? A summer house, Elm Court had almost 50,000 square feet, more than 90 rooms, 12 bedrooms, a salon and dining room of magnificent proportions, and a conservatory. In Gilded Age fashion, there were formal entertaining rooms for almost every activity: library, writing room, ballroom, music room, smoking room, and so on. Below stairs and in the attics there were the all-important kitchen, laundry, sewing rooms, wine cellar, and servants’ quarters.

In 1904, “Berkshire Resort Topics” described the final result: “Elm Court…has become famous…as an example of what the progressive modern spirit, backed up by abundant capital, can accomplish.”

Just suppose, however, that in 1886, one was not “backed up by abundant capital.” You could still build a cottage, but it adhered much more closely to the common definition. That year, The Manufacturer and Builder, a monthly magazine for the trade, advertised “A Cottage for $1,500.” $1,500 in 1886 is approximately $36,500 today.

Here is what you got for the money: on the main floor, an 8 x 12 foot kitchen with pantry leading to a rear porch; a door leading from kitchen to a 12 x 13 foot dining room with china closet; an 11 x 14 foot parlor, and stair hall running the length of the first floor from the front door to the kitchen. On the second floor, the stairs terminated in a landing. Off the landing were three bedrooms and a bath. Each bedroom mirrored the size of the room below and therefore the three were 8 x 12, 12 x 13, and 11 x 14. The bath over the front portion of the first-floor hallway was tiny, not delineated; it appeared to be about 3 x 4 feet. The cottage was described as accommodating 4 – 6 people.

On the exterior the house has a front porch and is said to sit on a 25-foot lot. This last must be a misprint since the length of the house is 28 feet and the width is 20 feet, but the implication is correct; the lot is small. The total square footage is about 1,200 square feet, about 600 square feet per floor.

At the same time, 1886, in South County, houses were advertised for sale. These were intended for townies, the average Joe, rather than the “Cottagers.” Searching the offerings and comparing the sizes and prices: the average Berkshire house was larger than The Manufacturer and Builder cottage by almost 1,000 square feet, and was offered at $5,000 or $120,000 in today’s dollars.

One thing is certain, from 1886 to now, there is a remarkable difference in the styles, sizes, and costs of Berkshire housing. And certainly Elm Court stood alone in size and amenities. One wonders why anyone would contemplate enlarging a 50,0000 square foot house. But then, between 1886 and 1900, residents along Old Stockbridge Road — living in their 1,900 square foot homes –probably watched in wonder as Peabody and Stearns added on and added on and Elm Court spread over the Berkshire landscape — becoming one of the largest of the Berkshire Cottages.