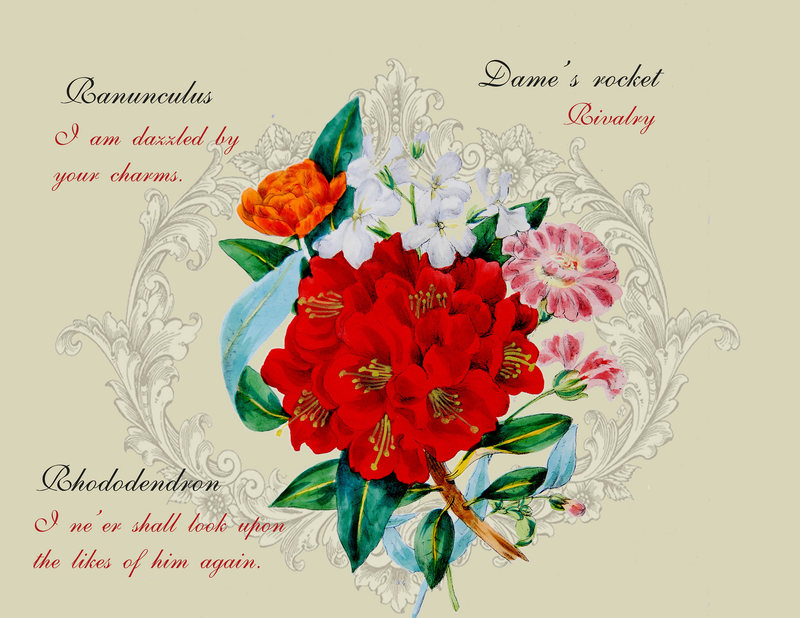 An illustration of the language of flowers from the 1855 book 'Flora's Dictionary. Image courtesy A. R. Mann Library, Cornell University

In the past 100 years, we have changed the way we dress, the way we travel and the way we communicate. We have changed our homes, our sources of energy, the products we buy and the prices we pay. What we have not changed is our nature: We hope to love and be loved.

Whether we call it courting, dating or hooking up, we engaged in rituals meant to result in finding a partner. The rituals were based on current beliefs and values. As values changed, rituals changed, but the goal remained the same. In the 19th century, the rules and rituals of courtship were prescribed by the church and then by society. However quaint they may seem to us today, we can identify with the underlying humanity and human yearning. In 100 years of lovemaking, the question is: Was it easier or harder to find the right mate?

One hundred years ago, every etiquette book set down the same rule: “Make no public exhibition of your endearments…above everything, avoid being personal in public.”

“Public” was a broad term which included any time spent in the company of the opposite sex. The ideal woman was too smart to show her emotions; the gentleman was never indelicate in her company. With so narrow a field for personal expression, it was easy to make a mistake. The rule led not to silence and restraint but to symbolic language, secret codes, complex interpretation of “looks,” and the speech of common civility degenerating into banter and double entendre.

Two of the symbolic languages were those of the flower and the fan. Flowers could represent words and when combined into a nosegay or bouquet, an entire secret message. To communicate accurately, however, one had to differentiate between subtle shades. While a white lily meant it is heaven being with you and a yellow lily meant I am walking on air, an orange lily meant I hate you. To complicate matters, the message changed if the senders and recipients were men or women. If a woman sent a camellia to a man, she was wishing him good luck. If a man sent a camellia to a woman, he was expressing admiration for her perfection. To wish a woman good luck, the man sent a white carnation. Combining flowers created a message. For example, a red rose surrounded by fern meant I am sincere in my love for you. The rich display of purple hyacinth and yellow jonquil meant I am sorry, please forgive me.

The language of the fan required knowledge and precision. If a lady rested the fan on her lips as a gentleman spoke to her, it meant: I do not trust you. If she dangled a closed fan from her left hand, it meant: I am engaged; from the right hand, it meant: I am available. If she wanted to warn a suitor, she placed a half-open fan over her face so he would know someone is listening. To communicate I like you, she opened the fan to fullest extent, lowered her eyes and stared at it. But if a lady quickly and sharply closed her fan, she was communicating I am not pleased.

With such a complex and inexact means of communication, there was a wide margin for error. There was the poor fellow who found himself engaged to two women at the same time without meaning to be engaged to either. There was the careful gentleman who did not receive so much as a reply to his proposal because the lady was utterly unprepared to receive it. Still, many navigated the tricky waters and, for them, courtship began.

Julia Ward Howe (1819 – 1910) did marry, but was never enamored of marriage. Nor was she respectful of society or its norms. She wrote in “The Sociomaniac”: “Her mother was a Shaw and her father was a Tompkins, Her sister was a bore and her brother was a bumpkins, Oh Soci-, oh Soci-, oh Soci-i-i-i-ety! Her flounces were of gold and her slippers were of ermine, And she looked a little bold when she went to lead the German [a dance that opened a ball].”

It was little wonder. The season of 1889 was little more than a marriage market. Appalling as it may have been, young society ladies’ chances in the marriage market were handicapped like horses by Col. Mann, editor of a society paper called Town Topics.

Mann wrote of one debutante that she was one of “the handsomest and best placed girls in America” to make a good marriage. She trips “to McAllister’s [Ward McAllister social arbiter] wand and is charmed by the voluptuous nonsense of their social routine as are canaries by figs and sugar loaf.”

What she wore and where she wore it consumed a tide of printer’s ink. Crowned by beauty and blondness, Town Topics reported that she was delectable in pink, enchanting in white and wore “green tulle décolleté edged in silver and a blue bird in her hair. The value of a Meissonier [French sculptor and goldsmith] was locked in the young woman’s gowns.”

Sadly, she fell out of favor with McAllister and the gossipy Mann by turning down a respectable and socially acceptable suitor.

She remained single while the season flagged; single while the suitor married another, and single while even her invitation to the society wedding never came. Mann described her beauty as fleeting as her chances for a husband. The fortune in gowns was an investment in his daughter’s future by a father who had lost his own fortune. She had no other avenue to safety and security but marriage. Her family had no way to remain in society but through her marriage. Yet she was headstrong; she would not marry without love.

You may recognize it as the plot to Edith Wharton’s “The House of Mirth.” Did the girl kill herself in the end as did Wharton’s heroine? Nope. She was invited to Elm Court for a summer weekend. There she met her Prince Charming and lived out her days in style in Paris, New York and Lenox. Her name was Amy Bend Bishop.