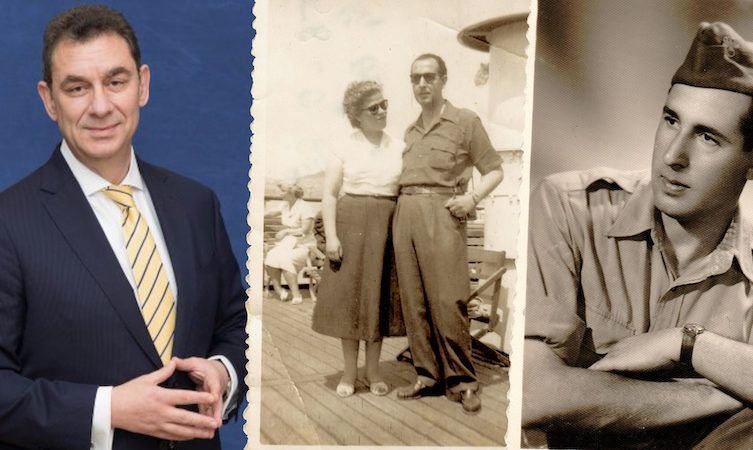 All historians are indebted to those who came before. The teller of this story is none other than the subject of the story. Research substantiates his facts, and the conclusion is uplifting, so the story bears repeating. Who is he? Read on…

More than 80 years ago, 60,000 Jews lived in Thessaloniki, Greece. It was the second largest city in Greece, with a total population of 150,000. The Jews were a large and thriving part of the city … that is, until the rise of Adolph Hitler.

Hitler invaded Greece in November 1940. The Jewish population was forced out of their homes and businesses and into a ghetto near the railroad yard. By 1943, the deportation of the Thessaloniki Jews had begun. They were shipped to Auschwitz and Auschwitz Two (Birkenau). The purpose of both camps was to make Europe ”Judenrein” (free of Jews). Both camps were highly efficient in exterminations — only about 4 percent of the 60,000 Jews of Thessaloniki survived.

Among the 2,000 survivors were Mois and Sara. The story of how they survived reads like a novel. In the ghetto, before deportation, there was some freedom of movement. Jews could even leave the ghetto as long as they wore a yellow star (indicating that they were Jewish). That stopped in 1943.

In 1943, the Ghetto was surrounded by troops, all freedom of movement stopped, and the deportation began. Rachel, her daughter, and her young son were rounded up. Rachel’s two older sons, Mois and Ito, were outside the ghetto with their father, Abraham.

Abraham told the two older boys to run and hide, but he returned to the ghetto to be with his wife and their younger children. Mois and Ito escaped to Athens. Abraham, Rachel, and the children were sent to Auschwitz. They were never seen again.

The brothers survived in Athens with fake IDs and, after the war, returned to Thessaloniki to find all of their property stolen, sold to others, or destroyed. The brothers started from scratch.

Mois’ future wife, Sara, had an even more harrowing tale to tell. As a young girl, she was taken into the household of an older sister who married a Christian. She was safe for some time — remaining indoors. However, when she ventured out, she was recognized as a Jewess, and arrested. Sara was sent to a local prison.

Sadly, it was no improvement on Auschwitz. Every day at noon, a number of prisoners were loaded into a truck and taken to be shot. Sara’s brother-in-law bribed a guard to spare Sara. However, his wife, Sara’s sister, did not trust the Germans and went every day at noon to watch the trucks being loaded. One day she saw Sara loaded onto a truck.

The couple made telephone calls and visits to the prison. They beseeched, pleaded, and demanded. As they begged, the prisoners were lined up facing the firing squad. In the last minute, Sara and another woman were removed from the line. Sara was made to watch the others shot, but she survived.

After the war, both Mois and Sara returned to Thessaloniki. There, they met and married. In 1961 they gave birth to a son, Israel Abraham Bourla. Abraham grew up in Greece and studied veterinary medicine. At the Veterinary School of Aristotle University, he received a doctorate in reproductive biotechnology. During that time, unlike many Holocaust survivors, Bourla’s parents told and retold the story of the Holocaust. They told it to their son so he would know and not forget. They told it as a celebration of their survival; a gift that enabled Abraham to be born and named after his grandfather.

In 1995, at the age of 34, Abraham Bourla made two decisions: he changed his first name to Albert and moved to the United States. He joined a pharmaceutical company as a manager, and rose through the ranks until, 24 years later, in 2019, he was made CEO.

Albert directed all efforts to find a vaccine against a new virus called COVID. He expended all financial and technological resources of the company to achieve his goal. He exerted his talents and those of his staff to succeed. A year later, the World Health Organization announced that Albert Bourla’s company produced the long-awaited vaccine. Bourla’s vaccine was distributed all over the world. The success was led by a Jew from Thessaloniki. A man whose parents miraculously survived the Holocaust, but whose other relatives were all exterminated. At his direction, the first shipment of vaccine went to Israel, in memory of the parents, grandparents, uncles, and aunts of Israel-Abraham Bourla, known today as Albert Bourla, CEO of Pfizer, Inc.

When the shipment arrived, Israeli Ambassador Ron Dermer said, “Seventy-five years after the Nazis murdered millions, Dr. Bourla is today leading the race to save millions.”

History is a wonderful thing; wait long enough and justice is done, goodness prevails. Or, as many have been credited with saying,“Faith is kept alive by the knowledge that the arc of history is long and bends toward justice.”

On the other hand, in December 2020, some fool on TV had a “scoop” — Bourla was unvaccinated. It was clear proof, in the TV talking head’s mind, that the vaccine was unsafe.

In reality, when offered the very first vaccine, the first protection in a tense national moment, Bourla said, “I refuse to cut the line. I will wait my turn.”

He waited and was vaccinated later. The TV reporter missed the truer and more inspiring story: once upon a time, there was a man who did not hate, who did not assert he was entitled, but worked hard, did good, and waited his turn.