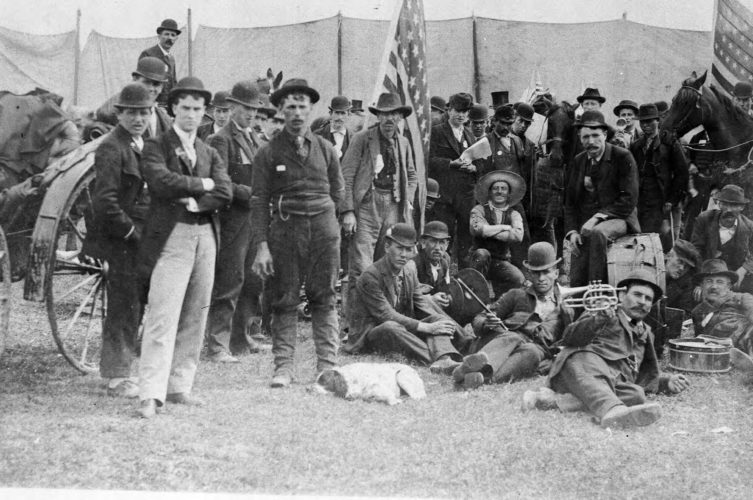 Recent protests may seem unique, but protests, marches, occupations and acts of civil disobedience are a part of the fabric of American life. Farmers, veterans, workers, women, the Black community, those on the right and those on the left all have demonstrated. They demonstrated to make their point or secure rights, but which was the first to do so in the United States?

The Boston Tea Party? Undeniably an exuberant act of civil disobedience clearly meant to aid in securing rights, however, it did not happen in the United States. It happened in the Colonies.

The Boston Tea Party, in opposition to the Tea Act of 1773, helped move public sentiment from negotiation to revolution. Seven months later, in July of 1774 in a tavern in Stockbridge, 60 delegates drew up and signed the “League and Covenant.” It was the first combined opposition to Royal rule in Berkshire. In August, the acts “for regulating the civil government and impartial administration of justice” led to the forceful closing of the court at Great Barrington a symbolic booting out of British rule. Most important, it led to raising a Berkshire militia. When “the shot heard round the world” was fired at Lexington in April 1775, Berkshire was ready.

The first protest in the United States was Shays’ Rebellion. It happened in 1787, before the ink was dry on the Constitution and even before it was ratified. The farmers’ acts of civil disobedience made manifest their demand for economic equality.

The farmers’ anger was focused on the courts where foreclosures, bankruptcies and incarcerations for debt were sanctioned. Shays sought to close the courts until the laws could be “regulated.” He did not succeed. Shays’ Rebellion did not begin in Berkshire County, but it ended here. The Regulators was squashed on a field in Sheffield.

Daniel Shays and his army were demonized as marauders, and later canonized as men who influenced the United States Constitution of 1787. The truth is somewhere between.

In 1894 in Ohio, Jacob Coxey began organizing a march to Washington, D.C., to protest economic policies. It was a hundred years after Shays, but the issues were the same. Americans were suffering. The Panic of 1873 left many homeless, jobless, penniless. The Depression of 1893 left 4 million unemployed out of a population of 62 million. Coxey wanted to influence Congress.

He organized “Coxey’s Army.” He planned to attract more followers along the route. He did. By the time he reached Washington, D.C., Coxey’s Army numbered in the thousands, but it was of little use. The legislation Coxey sought to block passed Congress and became law as he marched. Coxey and his army were stopped from occupying the Capitol steps by the National Guard. Later Coxey ran for office and lost. By 1896, as the country recovered economically, Coxey and his army were forgotten.

In March 1911, a fire broke out in the Triangle Shirtwaist Factory in New York City. The doors were locked during working hours and the fire escapes were very narrow. Trapped in the burning building by locks and bottlenecks, 146 people (123 women and 23 men) died. Trying to escape the fire, many jumped or fell to their deaths onto the busy New York street. Passersby were horrified as burning bodies hit pavement. Following the fire, an open-air protest was held to support the formation of unions to protect the rights of workers.

As a result, the Woman’s Trade Union was formed. The owners who locked the workers in escaped and survived. In criminal court, they were tried and acquitted of second-degree manslaughter. They lost in civil court and paid $75 for each worker who died. On the other hand, the insurance company paid the owners the equivalent of $400 per dead employee.

In 1932, the Bonus March turned into the Bonus occupation. Soldiers massed in Washington, D.C., to demand payment for their service in World War I. Their plight caught the sympathy of the nation; still, it took 12 years to pass a bill to pay and give benefits to the American soldiers who fought in World War I.

In 1963 Blacks marched on Washington demanding civil rights and listened enthralled to the Rev. Martin Luther King Jr. deliver “I Have a Dream.” In 1964, under President Lyndon Johnson, the Civil Rights Act passed. The protests continued in Birmingham, Montgomery and Selma to ensure implementation of the law. In 1965 Johnson gave his own “I have a dream,” echoing and honoring King. The speech to Congress called for the “dignity of man and the destiny of democracy.” Notwithstanding, for over 50 years, the Black community has faced voter suppression and intimidation.

These are a small percentage of the protests in this country’s history. People sit down, stand up, camp out and march because they want change. Throughout our history, many protesters wanted the same things: equal opportunity and equality under the law. All asked the same question: How do we go from protest to policy?

The most effective protests are those that influence popular opinion and change laws. The Boston Tea Party helped propel seismic change. It is ironic that a protest helped form this country and subsequent protests were squashed by it.

For example, some have compared Trump’s calling out of active-duty military in 2020 with Eisenhower’s in 1957. On June 1, 2020, protesters in Lafayette Square were not defying federal law; they were acting in accord with rights granted by the Constitution. In 1957, the governor of Arkansas was defying federal law and using the National Guard, under his command, to do it. Ike identified that armed refusal as insurrection.

In accordance with the law, Ike federalized the National Guard to order them to stand down and sent in the 101st Airborne to force compliance with the law. Ike believed he put down an insurrection. As a soldier, Ike also used the word “insubordination” to describe the behavior of the governor. Ike’s speech explaining his decision is clear. There is no comparison between protecting school children attempting to attend school and ordering active-duty military to clear a park of peaceful demonstrators for a photo op.

The right to assemble and the right of free expression are written into the Constitution. Those rights should be respected.