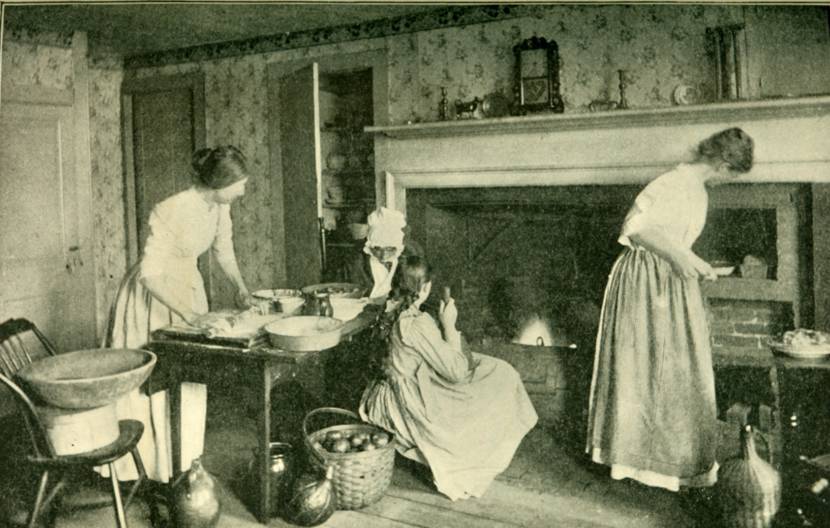 When the first settlers arrived in Berkshire County, circa 1724, it was through old-growth forest. They set down their carts and what few belongings they had in the midst of giant trees and undisturbed growth on the floor of the forest. Some undergrowth was robust enough to impede travel. In addition, there were waterways to ford and hills to climb before they arrived. Many traveled on foot, their carts used to haul the items most necessary to make a new home.

Roads, if any, were narrow Indian trails. There were no buildings or creature comforts. How the first white men knew where they were going or when they had arrived is anyone’s guess. Whatever they needed — clothes, shoes, shelter — they had to make by hand. Whatever they wished to eat or drink, they had to hunt, gather, cultivate and cook over open fire.

Most carried with them a pot, kettle, frying pan and bake kettle. A bake kettle was a large iron pot with a handle. It hung over the open fire or was covered and placed directly on the hot coals to make an “oven.”

Hasty pudding, Johnnycakes and pone were all essentially the same. Hasty pudding was corn meal or wheat flour mixed with boiling milk or water. Johnnycakes were differentiated by adding salt and butter and frying. For pone, add an egg and bake.

It may seem odd to us, but settlers considered green corn, green beans and cucumbers great delicacies. Salt and sugar were very popular but not readily available and therefore expensive.

There were more elaborate recipes, and a woman with a good recipe box was treasured. One recipe was as follows: “Wash a calf’s head clean and boil, rub with the yolk of an egg, salt and pepper. Strew it with breadcrumbs, grated lemon peel, and parsley. Set over the fire, basting often until it is light brown. When brown, slit the tongue down middle, blanch it and place on a plate; skin the brains and boil with parsley and sage, chop fine and mix with cream and butter. Pour brain mixture over tongue and mix; pour that combination over calf’s head as a sauce. Serve.”

The settlers believed water was poison. In many cases, they were right. Therefore, everyone of all ages drank spirits. Ladies preferred flip: “Warm beer, and sweeten with ginger, nutmeg, and lemon peel. Beat 4 ounces of sugar into four eggs and mix into whiskey, brandy or rum. When beer is warm but not boiling, put beer in one pitcher and rum mixture in another pitcher [and now] pour them together and serve.”

Children drank straight beer, hard cider or fruit juices. Men drank unadulterated rum, whiskey, gin, and the most popular, ale. Men, women and children drank tea. Coffee might be brewed at home. Brewing coffee in a public house was discouraged because the smell was objectionable.

Liquor was available everywhere — in stores and taverns. However, a special license was required for pouring and serving it but not if you sold it packaged. The first Massachusetts taverner license was granted to the Widow Bingham at the Red Lion Inn, Stockbridge.

Regardless of the superior fare available at a coach inn, most ate at home. It was considered strange to “go out to eat,” and besides, settlers had no money. By necessity, barter was the Berkshire way.

In the tavern or the dry-goods store, things were not assigned a cash value. Today, everything has a price calculated in dollars; then, an item could be traded for its value in nails, crops, firewood or home spun. Common products in a dry-goods store were groceries, crockery, glassware, hardware, iron, nails, pails, schoolbooks and medicines. Both opium and heroin were considered medicines. They were “cure-alls” available to all of all ages.

All the “stores” were rooms in a house. There was no zoning as we understand it. Every quadrant was mixed use — residential and commercial and farmland. In the early years, most locals, whether they owned a tavern, a mill or a dry-goods store, had a farm. At least, they all had poultry, kitchen gardens for vegetables, and perhaps a cow.

In those days everything was “homespun.” Just as a woman with a good cookbook was prized, so was a woman with a loom for weaving, a wheel for spinning and the skill for dying. If she produced excess, her homespun could be bartered for other things the family needed.

Somehow out of the mix, in a short span of time, the seeds of a new country were planted and Arcadia — the New Eden — grew. A form of government was established that was the envy of the world for the next two centuries.