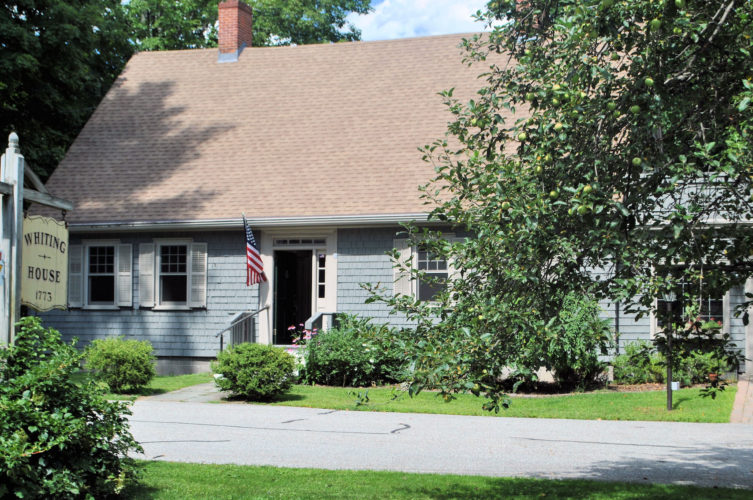 Great Barrington, April 1787: “At its last Judicial sitting in the County of Berkshire, William Whiting was convicted for uttering divers [diverse] seditious and inflammatory speeches and for making and publishing a seditious libel. He was sentenced to pay a fine of 100 pounds, to suffer 7 months imprisonment, and to be bound to good behavior for five years.”

Whiting’s conviction was reported in the same news stories that reported the sentencing of participants in Shays’ Rebellion. It gave the appearance that Whiting was a member of the Shays’ “Regulators” — a sympathizer with Shays’ agrarian resistance. It was perfect irony because Whiting was an enemy according to Daniel Shays’ men, that is: Whiting was a judge.

After the Revolutionary War, the country was heavily in debt. Taxes were levied. It was generally felt that the heaviest tax burden fell on the poorest citizens: the farmers. Farmers were already reeling from debt that rose exponentially during the Revolutionary War. When they left their farms and took up arms to help win the war, their crops suffered and profits plummeted.

Though promised compensation for military service, it was not paid at all, or it was paid in worthless currency. The farmers borrowed to pay taxes and then could not repay the loans. These economic pressures created “desperate debtors.” They were hauled into court where harsh laws favored the lenders: Their land and assets were seized, and they were imprisoned. Shays hoped to “regulate” the unfair laws. His first step was to close the courts by force until new laws were written.

The Regulators marched to the county court in Great Barrington. Judges were logical targets of their outrage, and Shays’ men captured Chief Justice of the Court of Common Pleas William Whiting.

Whiting described the encounter this way: “A numerous concourse of men had surrounded my house with the declared intention of demolishing it … they truly terrified me so that I deemed my life to be in danger. They conducted me into my own home and there compelled me [with fixed bayonets] to sign the agreement [to close the court].”

William Whiting was born in 1730. He studied medicine under a Connecticut doctor and may have set up practice in Hartford; however, in 1764, the doctor in Great Barrington, Joseph Lee, died unexpectedly at the age of 27. Whiting saw the opportunity and moved to Massachusetts in 1765.

He took up Lee’s practice and became a respected physician. His ambitions extended beyond medicine. The year he arrived in Great Barrington, he applied for a license as an innkeeper. He tried his hand at many businesses; all failed. The arena in which he did succeed was politics.

In 1774 Whiting was elected delegate to the first provincial congress. The pre-war years were difficult and dangerous. All of Whiting’s political acts could be considered heroic. He opposed the “acts of oppression” instituted by the British government in 1774.

He continued as representative and signed the “non-consumption agreement” — an agreement not to buy British goods. He was elected justice of the peace, and remained at his post when, in 1776, the wording of his commission changed from “by the authority of King George” to “by the authority of the government and people of the Massachusetts.”

During the five years that Berkshire courts were suspended (1776-81), Whiting served on the Committee for Public Safety. It was a mark of public trust that Whiting was asked to continue. When the courts reopened, Whiting was named chief justice of the Court of Common Pleas. Whiting seemed to move from triumph to triumph.

In “History of Great Barrington.” Taylor wrote: “During the Revolutionary period, no citizen was more conspicuous in town affairs than Dr. William Whiting.”

Stephen Riley wrote: “Whiting was a prominent member of a little group of conservatives who ran the affairs of the county.”

Whiting described himself as “timid and tender [with a] strong aversion to all mobs” and a man who meant to “soothe and calm all malcontents.”

He seemed unlikely to “utter seditious speeches.” He seemed the last citizen of Great Barrington to be mistaken for a member of Shays’ Rebellion. What happened? The short answer is politics.

In the years between the end of the Revolutionary War and the fearful night when Whiting faced men with guns and bayonets, Whiting wrote a letter and circulated it.

He signed the letter “Gracchus” — the ancient Roman who lobbied for laws to relieve and improve the conditions of the poor.

Whiting maintained that the letter was consistent with his lifelong defense and support of the common man. Others read the letter as giving comfort and encouragement to Shays. Truth is Whiting was consistent but the “little group of conservatives who ran the affairs of the county” were not. They were more liberal — even radicalized — before the war, and more conservative after. Poor Whiting didn’t get the memo.

When his letter was read in court, Judge Whiting was convicted. His health and his fortunes suffered. He was never again elected to public office. He died in 1792 at the age of 62.

Winston Churchill either said or got credit for saying, “History is written by the victors.” But what if the victors can’t make up their minds?