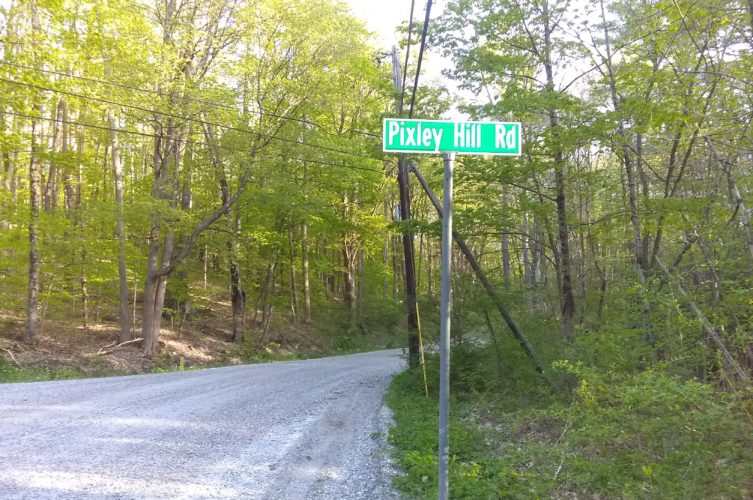 Dugway Road in Stockbridge where the body of Jan Stackhouse was discovered in May of 2005. Photo: Carole Owens

On the first Sunday in May 2005, Jan Stackhouse was found dead on Dugway Road near its intersection with Pixley Hill Road in Stockbridge. Stackhouse, a Brooklyn Heights resident, was visiting a friend in the village. At about 1 p.m. she told her host she was going for a walk and that she would return shortly. She was never seen alive again.

At approximately 1:30 p.m., her body was observed by a passing motorist, lying on the shoulder of the country road. Stackhouse was wearing jeans, a jacket and sneakers. Her host did not think she carried money, a wallet or identification. There was a single puncture wound in her neck.

She was 52 years old. For three years, she worked as the director of membership and dues for the Service Employees International Union Local 1199 on 43rd Street in Manhattan. Before that, she was a financial analyst for Empire State Economic Development Corporation. Stackhouse was divorced with no children. Her immediate family were sisters Lynn and Jill, and parents Heywood and Jane of St. Augustine, Florida.

Early reports stated she was stabbed, but police said it was unclear what type of weapon or object was used to create the wound. In a telephone interview, a spokesman for the Berkshire Country District Attorney said, “We are working diligently to solve it, and solve it properly,” but the spokesman declined to discuss any details of the case or potential motive.

On a quiet, sunny Sunday afternoon in the New England village often called Norman Rockwell’s town, between approximately 1 and 1:30 p.m., Jan Stackhouse bled out and died. Townsfolk, interviewed by newspaper reporters, all said the same thing: It was shocking. In fact, everything about it was unexpected and inexplicable.

The only violent death before 1969 was in August 1940. A police officer directing traffic after a Tanglewood concert was hit by a car and died as a result. Before that? Perhaps during the French Indian or Revolutionary War or Shays’ Rebellion. Murder and manslaughter were so rare; the place it happened was a mystery. Stackhouse was so ordinary and well-liked, to whom it happened was a mystery. There was no weapon, no motive, no suspect, and officially no theory of the crime. That did not stop the rumors. The absence of fact may have incited them.

The rumors were rife. Since there was the word “union” in Stackhouse’s resume, it was a mob hit. Since it happened on Pixley Hill Road, the real target was obviously a resident of that road and Stackhouse was not an unintended victim. Since it was “crazy,” it was the work of a hermit who lived in a local cave; a man who used or sold drugs or both.

Stackhouse’s host was interviewed, as was the cave dweller. Both were eliminated as suspects. If there were any promising leads immediately after the incident, the authorities were silent. However, a decade later, they spoke out.

Interviewed by 1Berkshire, Sarah Stein, Ph.D., co-author of “Cold Cases,” was skeptical about the organized-crime theory. “Generally, with mob or Mafia-related crimes, you’re going to see the use of a firearm. You’re not going to see sharp-force trauma, especially not one cut like that.”

Stein said she had not read the case file; still, she offered a theory: “It was a crime of opportunity. I don’t think there’s any personal connection between the killer and the victim.” Stein continued: “There’s no evidence of overkill or passion or anything of that nature. I think it was just a case of being at the wrong place at the wrong time.”

A crime of opportunity presupposes someone on a country road between 1 and 1:30 p.m. on a Sunday afternoon looking for a victim. It posits, that in a village of 1,800 people, that same killer was unnoticed and did not stand out in any way. Most unbelievably, it suggests a murderer out on a Sunday afternoon looking for the opportunity to kill, who never killed before and would never kill after.

By summer of 2005, there wasn’t a solution, suspect or solid clue. For some it became old news; others could not forget. Facts and truth ease fear, but there were no official announcements. Any announcements made in May were in the negative. In the days immediately after, crime scene specialists, using dogs and metal detectors, found no weapon or clues.

Early information may not be accurate. The earliest theory was she was stabbed in the neck with a knife. It seemed improbable. The perpetrator would have to be very close to stab Stackhouse, too close for any chance of mistaken identity. The person would have to be very strong and determined to kill Stackhouse with a single puncture. Stackhouse was a stranger in the village, an infrequent visitor: Who even knew her, least of all meant her harm?

Stackhouse’s Stockbridge host, city friends and relatives had no facts. The DA’s office and the Stockbridge police either knew nothing or would share nothing they knew. An ER staffer could describe the wound, but she and a forensic specialist could only surmise after that. It was so tantalizingly mysterious. It dragged on, unsolved and apparently uninvestigated. I could not let go.

First, I assumed the early news reports were correct: Stackhouse was found dead on the shoulder of the road. Second, I applied Occam’s razor: the simplest answer is the correct one. The murder of a very nice woman in a very safe village on a Sunday afternoon was so improbable it didn’t happen. Since there was no apparent motive for murder, there was no motive. In other words, it was not a murder; it was not premeditated or malicious. Could someone lethally stab another accidentally in the neck with a hand-held weapon? No, so it was not a hand-held weapon. However inflicted, what wound would cause someone to bleed out so quickly? A puncture or a gash? Under what circumstance would the inflictor of the wound leave a woman on the side of the road to bleed out?

Then serendipity — I parked my car and was walking between vehicles toward the sidewalk when two things happened. As I walked beside a Ford truck with extended side mirrors, the mirror clipped my neck. It hurt but didn’t bleed. Second, the driver, sitting in the truck, did not see me or realize what happened.

What if a truck were moving at a good speed down Pixley Hill Road between 1 and 1:30 p.m. on May 1, 2005? If Stackhouse were walking facing traffic as recommended along country roads, she would be on the passenger side of the vehicle. What if an extended truck mirror gashed her neck and the driver never realized it? Is that what happened? No way to prove it. It may even rely on facts, not on evidence. Jan Stackhouse’s death will always be among the unsolved cases. But it’s a theory.