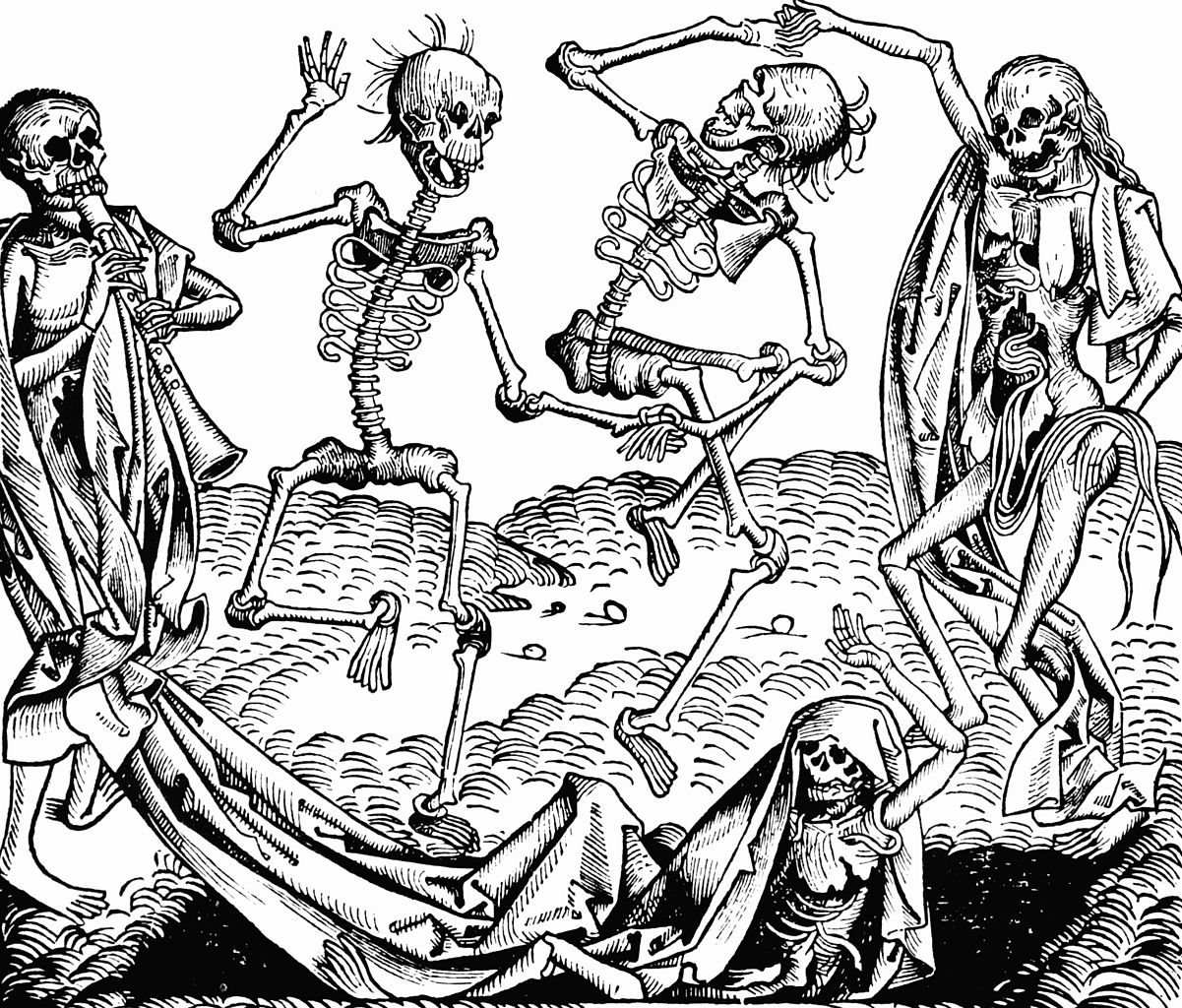 'The Dance of Death' (1493) by Michael Wolgemut, from the Nuremberg Chronicle of Hartmann Schedel. Image courtesy Wikipedia

At a time like this, planes, trains and passenger ships get a bad rap. However, even before modern conveyances, there was plague. The Black Plague began in 1347 when 12 ships from the Black Sea docked in Messina. Fifty million people died of bubonic plague. That is 50 million of a total world population estimated at 450 million, or one-ninth of the population dead. What stopped it? Only quarantine.

According to Jared Diamond, author of “Guns, Germs, and Steel: The Fates of Human Societies” (1997), the success of the Europeans over the indigenous people of North America was only partly due to superior weapons or warcraft. Much more effective was disease.

Diamond estimates diseases brought from Europe wiped out as much as 95 percent of the indigenous population. The chief culprits were influenza and smallpox (which Indians called “running face”). This systematic annihilation began as early as the arrivals of the first ships in the New World.

Of the 20 million, 500,000 deaths were in the United States, and of those, 351 died in Pittsfield, 41 in Lee and four in Stockbridge. Elsewhere in Berkshire County, statistics were not as carefully kept and the number would only be a guess.

The distance from urban America, the mountains, the sparse population, none protected the Berkshires from the flu. In fact, the total number of cases, not deaths, mirrored the worldwide percentage: 4.9 percent of Berkshire residents fell ill with Spanish flu.

It was September 1918. Newspapers carried the story of an overwhelming number of cases of flu (alternately called grippe) in Boston and on nearby military bases. Attention, however, was focused on the war, not on disease. The fact that more people were killed by the Spanish flu than by World War I did not alter the public’s focus.

Local papers mentioned the flu on page 10. Newsmen predicted the flu would not travel as far as the Berkshires. The first case was reported in Pittsfield on Sept. 19; the second in Great Barrington on Sept. 22. On the 24th there were 24 cases in Pittsfield alone.

In days, sickness was followed by death. On the 22nd: A man and a woman, both civilians, died in Pittsfield; two soldiers, one from New Ashford and one from Savoy, died the next day. Still, Pittsfield officials were loath to alert the public.

There were at least two reasons why it took so long to warn the public and take steps. First, it was not considered prudent to alarm people. Panic would not help the situation. Second, there was no cure and indeed no treatment for the flu. A cool cloth and a kind word, perhaps a cup of tea, were all medical science had to offer.

The Commonwealth Commissioner of Health released a statement: “We advise that local boards counsel calmness and moderation in treatment of this outbreak which in all probability is transitory in nature.”

Not much was said — and little was done — until the disease spread exponentially. It was like a wildfire — like flame through dry grass. In one week, the number of afflicted grew from one to 72. The affected area spread from Pittsfield north to North Adams and south as far as Stockbridge. The deaths climbed from one to 10 in that period. Finally, Pittsfield acted.

They advised people to stay home and not attend any public gatherings, including schools, churches and public entertainments. Still they sounded optimistic: The disease had peaked, they thought, and was running its course. It would be gone in just days.

It wasn’t. In another week, the number of cases jumped dramatically from 72 to 341. It was clear to county officials that not all cases were being reported and equally clear this was a crisis. In mid-October, regulations were instituted to contain the spread. Reporting was mandatory, as was isolation of sick patients; masks must be worn; schools were closed and all public gatherings, including church services, were prohibited. When the Catholics refused to cancel Mass, officials shrugged and merely asked priests to keep the service short — omit the sermon.

The hospitals were full to capacity and it seemed not one more patient could be served when the number of sick jumped from 341 to over 700. In Pittsfield hospital tents were pitched. It was fall in the Berkshires and the nights were chilly. There was no way to heat the tents so they put heating pads in the beds.

The number continued to rise until there were not enough doctors or nurses or beds. The state allocated $100,000 for extra duty by doctors and nurses but there were no extra doctors or nurses to pay. Those who suffered any other illnesses, who were not contagious, were moved out of hospitals to private homes to make room. Volunteers pitched in. Everyone not paralyzed with fear of the disease rolled up their sleeves. Still the march of the flu through Berkshire County was relentless. The sick were warehoused and in the end, there were not enough coffins and the dead were stacked.

Then, as quickly as it had come, the epidemic was gone. On Nov. 11, 1918, Germany surrendered and so, it seemed, did the Spanish flu. In its wake the final count was 1,900 people in Berkshire County sick and 396 dead.

With any plague, important tools to stem the tide are quick, accurate diagnosis and quarantine of the sick. We can each help ourselves by doing simple things to boost our immune systems — for example, exercise. Also, avoid large gatherings or traveling on large closed conveyances such as buses, planes and cruise ships. Above all, an informed public is absolutely mandatory.

The coronavirus has come and it will go. In the meantime, a dearth of information, misinformation and self-serving actions are the friends of the spread. Accurate information, including an accurate count of the sick and quick response, are its enemies.