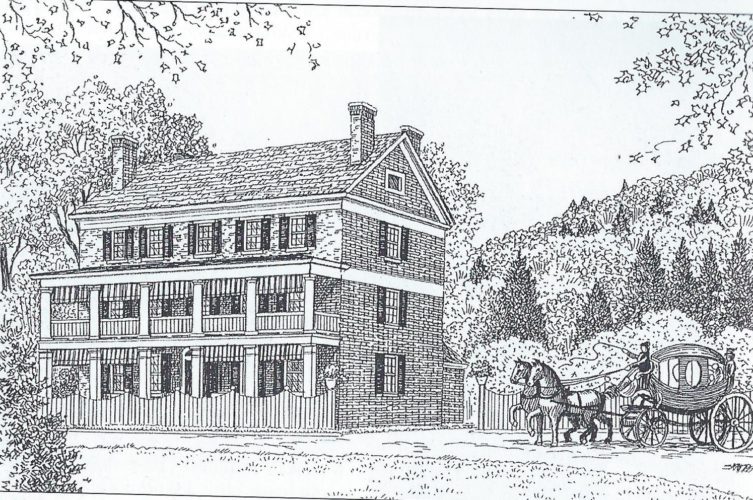 An advertisement for a local tavern. Image courtesy author's collection

Where will you eat holiday dinners? By the late 18th century, New Englanders, including Berkshire residents, ate at a groaning table in taverns.

Berkshire began as a series of agricultural communities. The main concern was survival: protection from starvation, the elements, and wild animals, especially wolves. We were isolated and insular, with a population that had scant discretionary income, resources or energy for the amenities. The largest of the communities, Pittsfield, had just 60 housing lots. Then it grew, and by the time Pittsfield was incorporated in 1761, it had changed from wilderness to burgeoning community. It had a rising population, an improvement in domestic arrangements, a church, a town hall, forges, mills and taverns.

In parts of Massachusetts, the first taverns had wonderful names: the Tree of Knowledge, Bunch of Grapes, Green Dragon, Orange Tree, and Red Horse. They also had terrible reputations.

In 1696, in Salem, Judge Nathaniel Saltonstall wrote: “I always thought it great prudence and Christianity … to state the number of publique [public] houses [allowed] in towns and [to have] regulation of such houses … thereby to prevent all sorts of wickedness which grows daily … in these pest houses and places of enticement.”

Six decades later, Berkshire taverns were known simply by the names of the owners, and licensing of taverns was required. Furthermore, between 1761 and 1762, the taverner license became known as the innkeeper license, perhaps to remove any taint. From then on, the terms “tavern,” “inn” and “public house” were used interchangeably. “House” was a good descriptor because taverns were often located farm or town houses. The large white house on Main Street in Stockbridge, the Red Lion Inn today, offered rooms and a small shop, but the Widow Bingham informed the court that she could not survive economically without selling booze.

Soon the words “coffee house” entered the language, but no one knows why. Early residents bought coffee beans, but ground, brewed and drank them at home. It was not brewed in taverns because, in the opinion of many 18th-century folks, brewing coffee produced an “evil smell.” The most popular drinks were punch, cider, grog, beer, ale, Madeira, syllabub (sweetened milk or cream curdled with wine) and flip (sweetened beer heated with rum or brandy added).

Early Berkshire taverns were not rowdy places; they were regulated as Saltonstall had wished. It was unlawful to dance in a tavern or to play dice, cards or other gambling games. Berkshire taverns were established along the main stagecoach lines. In Pittsfield, that was East Street to Boston, West Street to Albany, and South Street to Hartford and Hudson. In South County, that was along what we now call Route 7, and other roads. Then as now, those businesses that attracted travelers as well as locals faired the best. We have been innkeepers to the outlanders as long as we have existed.

The first to receive a taverner license in Pittsfield was Daniel Hubbard in 1762; his tavern was on West Street. Other early taverns were owned by David Noble (on the east side of town), Capt. John Strong on East Street, and Capt. James Easton on South Street. The tiny village of Stockbridge had three taverns, and in Great Barrington, the minister complained there were more taverns than churches.

Today we would not think of a tavern as part of the cultural life of a town, but in 18th-century Berkshire, it was. In taverns, the population came together, local news was exchanged, clubs were formed and club meetings were held. Mail was delivered by the stagecoaches to taverns, as were local and out-of-town newspapers. All were collected, read and discussed at the taverns. Books were exchanged. Taverns were de facto libraries and post offices.

Taverns were also part of the political life. The minutes of the town meetings were posted there, as were the 18th-century version of legal notices: “Mr. X declares that he will no longer pay the bills of his wife Mrs. X as she is profligate.”

In the late 1700s, in taverns, a revolution was plotted. Reputedly, John Adams, John Quincy Adams and Daniel Webster drank at Pittsfield taverns. Taverners David Noble and John Strong were among the first of Pittsfield’s residents to stand for liberty and the Revolution. At Sheffield and Stockbridge taverns, proclamations were discussed, worried over, signed and read aloud.

During the Revolution, the civil courts were closed because the judges were considered Tories (Royalists). Arbitration of civil matters was heard at James Easton’s Tavern on South Street in Pittsfield. When the Revolutionary War ended, taverns became the strongholds of political parties. One tavern served only Federalists and another limited its custom to the Democrat-Republicans.

At Merrick’s, a party of Federalists was declined service at the Fourth of July dinner because Merrick was an anti-Federalist tavern. This only caused the Federalists to come together, raise the money and open their own tavern on Park Square, wherein they promised to serve everyone.

When the church loosened its grip, music as well as dancing was added to entertainment in taverns. Ballrooms were built for dances and parties. The ballrooms were usually on the second floor, and sometimes a second floor had to be built first. Taverns became the places for celebrations. While Christmas was celebrated in church and New Year was celebrated at home, Thanksgiving and the Fourth of July dinners were eaten in taverns.

As the War of 1812 approached, Ingersol’s, Keeler’s, and Merrick’s taverns were added on North Street, and Stanton’s Tavern on East Street. Gen. Lafayette was fed a grand dinner on the second floor of Merrick’s. At Keeler’s, a converted farmhouse, there was dancing for the soldiers billeted at Pittsfield. Likewise there was merriment on Main Street in Stockbridge for soldiers on leave.

Taverns were often the place to receive the earliest news from beyond the Berkshire Hills. As the War of 1812 seemed to be drawing to a close, Pittsfield residents gathered at Hubbard’s Tavern, and waited anxiously for word. Knowing people depended on the stagecoach line for news, the company affixed large pieces of paper to each side of the coach. On the paper there was large black lettering. As the stagecoach rolled through Berkshire County, all could read the word: “Peace.”