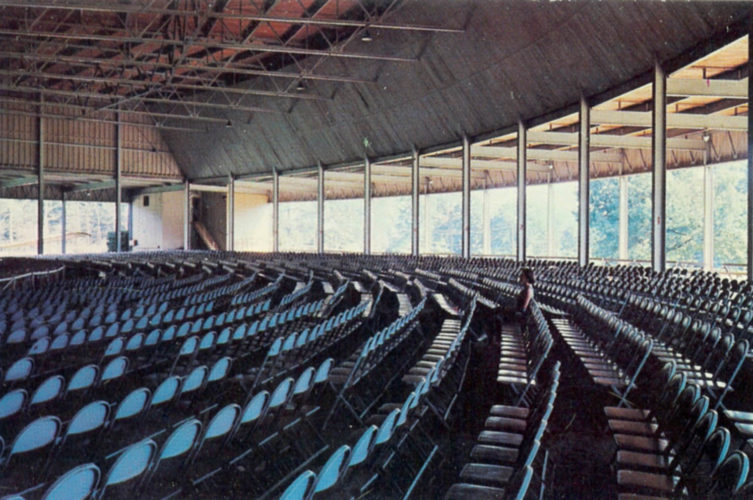 The Shed at Tanglewood. Photo courtesy Carole Owens, from the author's collection

Editor’s Note: This column has been revised and republished after the author sought clarification on issues she discusses.

The Boston Symphony Orchestra (BSO) sells sweatshirts that read, “Tanglewood, Lenox Massachusetts,” however, only the first few feet of the West Street parking lot are in Lenox, the grounds of Tanglewood are entirely in Stockbridge. As are Wheatleigh and Kripalu.

A reader complained to a local paper, “Tanglewood is in Stockbridge.”

A reporter responded, “It is our policy to state Tanglewood is in Lenox.”

Even though it is not? That’s odd, but many make the same claim. Wheatleigh does, although Wikipedia corrects the assertion, and the Lenox Chamber does.

When asked, years ago, why they claim Tanglewood, Wheatleigh, Elm Court, and Kripalu are in Lenox, the Chamber responded, “it’s good for business.”

Lenox Chamber believed it boosted Lenox room sales and even boosted the price per room that could be asked. So, four tourist magnets are in Stockbridge while many say these establishments are in Lenox. Who cares? Is this a petty error or a serious one?

Individuals who live in the north end of Stockbridge, adjacent to Wheatleigh and Tanglewood and near to Elm Court and Kripalu, routinely receive excise tax bills (for automobiles) from Lenox. Many just pay them to Lenox even though they live in Stockbridge.

“It’s easier,” one northside resident, Patrick White, says. “For me to correct the error, I had to write both Lenox and Stockbridge town halls, explain the mistake, and urge them to correct it.”

The excise tax is billed incorrectly, and frequently paid incorrectly, simply because those individuals in the north side of Stockbridge have Lenox addresses. They use the Lenox post office because it is much closer to that end of Stockbridge. They say the Berkshire Cottagers used that post office, convenient or not, because a Lenox address was considered more posh. For whatever combination of reasons, it has been a long-standing practice. It is not isolated to Lenox/Stockbridge. One reader reports she is billed the excise tax by Great Barrington but lives in Sheffield.

White continued, “Neither office, Lenox nor Stockbridge, encouraged me to make the change. Both were sorry I bothered.”

Why? It is a big bother for a small amount of money. There are just a few who pay the tax bill to the wrong town, and it does not amount to much in revenue. However, there are other taxes that make this issue a very big deal.

What if the same thing is happening with super venues that earn millions per year and owe substantial amounts in taxes? Those who sell rooms, food and beverages, as Wheatleigh and Tanglewood do, owe the taxes on those sales to the Commonwealth. In turn Massachusetts distributes a part of the amount collected to the towns. Stockbridge receives 4.75 percent per annum. At that rate, Stockbridge collects hundreds of thousands per year. In 2018 the income to Stockbridge was $441,035 — $362,402 in room taxes and $78,633 in food taxes (which includes beverages).

Nice annual income, but what if Stockbridge is entitled to more? What if a mistake is being made similar to the one made with the excise tax? That is, what if taxes collected by the Commonwealth are going to Lenox because the establishments have Lenox addresses even though all three are in Stockbridge? Then the seemingly small mistake of claiming Elm Court, Tanglewood, and Wheatleigh are in Lenox would be costing Stockbridge big bucks. It must to a simple matter to check, right?

Not according to Dannielle Fillio, Stockbridge Town Administrator. She says that the amount paid to the town is paid as a lump sum and not broken down. Requests to break it down are declined by the Commonwealth. Ostensibly, one could view the license each establishment is required to have and to display and determine if all revenues from Wheatleigh or Tanglewood are paid to Stockbridge.

A profit-making business such as Wheatleigh, and Elm Court is proposed to be, may wish privacy with respect to taxes paid. Their gross sales can be extrapolated from the tax bill. However, nonprofits such as Kripalu and Tanglewood have no such right to privacy. By law, they must file form 990 and make public income and expenditures.

Nonprofits are a separate issue. Tanglewood, a part of the BOS, a 501C3 nonprofit, pays taxes on food and beverage sales.

According to Bernadette Horgan, Director of Media Relations, “The Boston Symphony Orchestra, through Boston GourmetCatering, pays Tanglewood food and beverage taxes directly to the State of Massachusetts, which manages the dispersion of those tax dollars.”

On the other hand, Rebecca Churt, Kripalu’s VP of Marketing, responds by noting that “Kripalu’s offical address of business is 57 Interlaken Road in Stockbridge, Mass., and lists itself as such on kripalu.org.  Further, per an economic impact report released in the summer of 2018, Kripalu voluntarily pays the town of Stockbridge an annual sum of $39,352 in lieu of taxes.”

For more information how institutions are supposed to be collecting room and meals taxes, go to: https://www.mass.gov/technical-information-release/tir-09-13-local-option-sales-tax-on-meals-and-local-option-room

Other nonprofits (generally 501C3) claim all their activities are tax exempt, but they may be wrong.

According to the Foundation Group, “Are All 501(c)(3) Activities Exempt? No. Some activities could be taxed, for example, unrelated business activities. If a nonprofit runs a business venture to supplement its income and that activity is not related to the nonprofit’s core mission, it is taxable.”

For example, a nonprofit may have rooms that they sell. They may claim that is part of a package with the tax-deductible program. But the state or federal government may consider that activity separate and therefore taxable. Furthermore, under the new “Airbnb” law the room sales may be taxable.

Secondly every effort should be made to be sure all establishments, including nonprofits, are paying all taxes due. For Stockbridge, it is a healthy income stream. After all, it does matter where these super-venues are located. A lot of money is involved in getting this right.