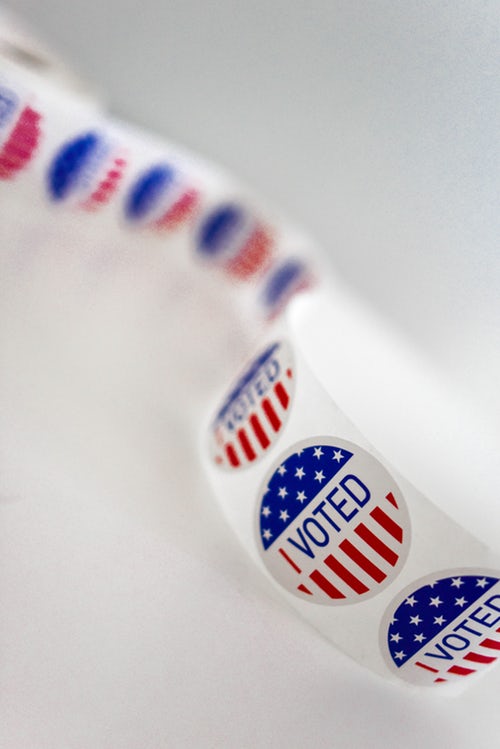 “Those governing [shall] derive their power solely from the consent of the governed.”

That is the principle on which our government was founded: power derived solely from consent, not from brute force, deception or an assumed hereditary superiority.

The men imagining this new form of government, our Founding Fathers, insisted, and fought to ensure, that power derived from the people. The mechanism by which that power was granted was the vote.

So firmly stitched into the fabric of early government, the right to vote is assumed and not specifically mentioned in the Constitution. However, the right is expanded by the 15th, 19th and 26th amendments to the Constitution; augmented by the 17th, 23rd and 24th; and further strengthened by the Voting Rights Act of 1965. That is, the right cannot be denied due to race or sex and is guaranteed to citizens over the age of 18. Citizens can vote directly for their senators, and it is forbidden that “any constitution, law, custom, usage or regulation of any state or territory” deny citizens their right to vote. It is criminal to “intimidate, threaten or coerce” voters to prevent them exercising that right. And yet, vote tampering has risen to a fine art.

At the outset, three things must be stated. First, voter suppression began with the forming of our government (see side bar below). Second and third: All strategies for tampering are illegal, and both sides have indulged in them. They are: voter suppression and disenfranchisement, ballot box stuffing, gerrymandering, and voter fraud.

Voter suppression schemes target specific populations, generally nonwhites, and make it onerous or impossible to register, to get to the poll and cast a vote. Recent examples include the shenanigans in Georgia, North Carolina and North Dakota.

In Georgia, Secretary of State Brian Kemp, overseeing the election while running for office, suppressed as many Black and Democratic votes as possible. A law passed in North Dakota in the run up to the election was designed to suppress the Native American vote. In North Carolina, the Republican candidate for the House of Representatives allegedly hired someone to “collect” ballots from the elderly and infirm and submit, alter or toss them out depending on how the citizen voted. Sadly, they also offered to fill out the ballot for the person—a form of ballot box stuffing.

In other states, polls are closed in poorer areas. Voters are instructed to vote at a polling place a car ride away. It reduces (suppresses or disenfranchises) the poor and those without transportation.

A clear suppression of immigration at the borders and denying citizenship to those already in the country (the “Dreamers”) is seen by many as a strategy for voter suppression. For those who see the immigration fight in that light, the reason is the belief that an increase in Black and Brown voters apparently favors Democrats.

One nuance of voter suppression is voter nullification. In Wisconsin and Michigan, when the voters elected Democratic governors, the Republican state legislatures voted to usurp some powers of the executive branch.

Gerrymandering is redrawing voting districts to give more weight to voters in one party than another. Those who wonder why the popular vote does not reflect the popular will; why Republican Congressmen are afraid of being “primaried”; why the Senate was not in play in 2018; and why Mitch McConnell is called a “caddie at a Trump golf course” or a “butler at Mar-a-Lago”—the answer is gerrymandering.

If the vote is the underpinning of our form of government, if it is illegal to interfere with a citizen’s right to vote, why would anyone attempt it? The best guess is to win.

Given today’s numbers, the Republicans are hard at work litigating the vote by whatever means. If the numbers shift, so might the party that interferes with the vote. At any time, the party with the higher numbers claims the moral high ground while the party with lower numbers tries whatever it can.Today, the Democratically held House wishes to introduce voter rights legislation, which essentially undoes all the obstructions for certain voters instituted in the states—while Mitch McConnell cried, “it is a blatant power grab,” and a Democrat responded, “Yes, the voters are grabbing power.”

It is harder to understand why American citizens would undermine elections. The reason to manipulate the vote may be to win but, even if accurate, is that reason sufficient? When the people vote, they are forming the government, empowering the governors and making manifest the words “government of, by and for the people.” When anyone attempts to undermine the vote, they undermine our form of government. Is winning reason enough to weaken our democracy? Actually, some who attempt to manipulate the vote intend to alter or weaken our form of government.

On Oct. 19, 2018, a rare joint statement from National Intelligence, the Justice Department, the FBI and Homeland Security was issued, warning there is an “ongoing campaign by … foreign actors to undermine confidence in democratic institutions, influence public sentiment and public policies, and influence voter perception and decision making in 2018 and 2020 elections.”

So many issues are smoke screens, promoted and designed to divert, to confuse, to encourage blind emotional decision-making when the real issue is that our democracy, our form of government, hangs in the balance. If we the people consciously want another form of government—an oligarchy, say, wherein the richest rule—then they can vote for that form.

However, the people should not be tricked and defrauded into voting without full knowledge. Democracy is messy. It is not for the faint-hearted or the undereducated. There are rights granted to us but if they are abrogated without objection, we lose them. Democracy requires that we stay alert and be willing to fight. It is a mess. It is like a job. The push-pull of competing forces does diminish but never disappears.

If the people—fully aware—select a benevolent dictatorship or rule by the richest, then imagine an international “government” of the richest regardless of nationality. Imagine undoing all the treaties and organizations since World War II based on boundaries and dedicated to world peace. Undo all those and replace with an international association of the richest organized to protect their holdings and enrich one another at the expense of national governments and the masses. No more war, and for the masses, only the dream of riches and the relegation to abject poverty.

In a New Jersey court, after the judge ruled from the bench, I heard a man say to his lawyer, “I don’t have to listen to the judge, I make more money than he does.” That is subversion of the rule of law. That is a man standing against democracy and for oligarchy. He is not alone in his belief that money rules.

At different times, for different reasons, to different people, another form of government may seem attractive. But if that is what the people vote for, it is what they will get. Our founders gave us the power to choose, not the certainty of what choice we will make.

Not only do both sides indulge when necessary, but also these practices began with the Republic. While our founding documents spelled out the rights of citizens, they also made clear who could not vote—women, former prisoners, nonwhites, and those who did not own property. From our inception, the movements to be inclusive have been balanced by the movements to remain exclusive. Efforts to amend the Constitution to grant rights more broadly have been met by efforts to suppress rights, including the right to vote.

A mere five years after the Constitution was ratified, Patrick Henry tried gerrymandering in Virginia; it failed. It was successful in Massachusetts in 1812. The redrawn district in Massachusetts, done at the behest of Gov. Gerry, looked like a salamander, hence the name: Gerry’s salamander; gerrymander.

In the 1850s in New York City, Tammany Hall saw the wisdom to commit voter fraud. The wave of immigrants was overwhelming, and there were no social welfare programs. Tammany Hall stepped in and provided the only relief. Grateful immigrants voted “the Tammany way.” A population unable to read or write were never unclear where on the ballot to put their marks. If immigrant votes did not tilt the outcome sufficiently, Tammany workers stuffed the ballot boxes.

In Massachusetts, in the 19th century, the imperative was “vote early and often.” Political operatives combed graveyards for proper names to use. In Massachusetts, you could be lifeless and still not be useless.

There are many more examples over our history. Be aware: When Mitch McConnell says he will not allow any vote on the floor of any bill that POTUS will not sign, whatever he is thinking, what he is doing is undermining our democracy—obliterating a founding principle that power should be divided among the three branches, never concentrated into one.