CONNECTIONS: Poetic mysteries solved, but no way to prove it

People say they hate research and love a good murder mystery when often the two are one and the same. Here is an example.

The poem, at left, was brought to me with two questions: who wrote it and to whom?

As in any good mystery, we look for clues, so read the poem, extrapolate any facts, and then read on.

The poet’s initials are R.E.G. He was alive on or before January 1856 and he wrote from Stockbridge. In that time period, Berkshire writers with a last name that started with “G” were Richard Gilder, the Goodale sisters, and Robert Grant. However, Gilder lived in Tyringham and his middle initial was W; the Goodale sisters were from Mount Washington, neither had a first name starting with R, and both were born after the poem was published. Finally, Grant was born in 1852. Did he publish a poem at four years old? Probably not.

That leaves Robert E. Galpin. He was born in Litchfield, Conn., in 1795 and died in Stockbridge in 1868. so he was a 61-year-old Stockbridge resident in 1856. Furthermore, he wrote at least one other poem. In 1839 he wrote “On Building a Town Hall in Stockbridge.”

By 1824 Robert E. Galpin was living in Stockbridge. By 1836 or earlier, he married Cynthia Smith, 16 years his junior. In 1836 when he was 41 and his wife was 25, they had a daughter, Mary. The same year Galpin purchased the Red Lion Inn. He owned the inn from 1836 – 1848. He was a respected townsman and, over a 20-year period from 1824 to 1848, he served as town treasurer, selectman, Housatonic Agricultural Society member, and representative to the state Legislature.

According to the 1855 census the year before the poem was published, the Galpin household consisted of Robert (60), Cynthia (44), Mary (19) and Charles Riley, a laborer, age unknown.

None of that proves Galpin was the poet. His residency in Stockbridge, his age and initials, and the fact that he published at least one other poem are circumstantial, yet nothing refutes the supposition. So let us assume he is R. E. G. and ask: to whom was he writing, and does the identity of the “Peasant Bard” add support to the notion that Galpin was the writer?

From the title and the lines “so rich a boon from the Muse’s golden spoon” and “a rare production penned by thee,” it is fair to guess that he is also a poet.

Stockbridge in 1856 was rich with poets, painters, and novelists, as were neighboring Lenox and Pittsfield. Nathaniel Hawthorne had left and so had William Cullen Bryant, but Melville was still around as were Oliver Wendell Holmes and Henry Wadsworth Longfellow. 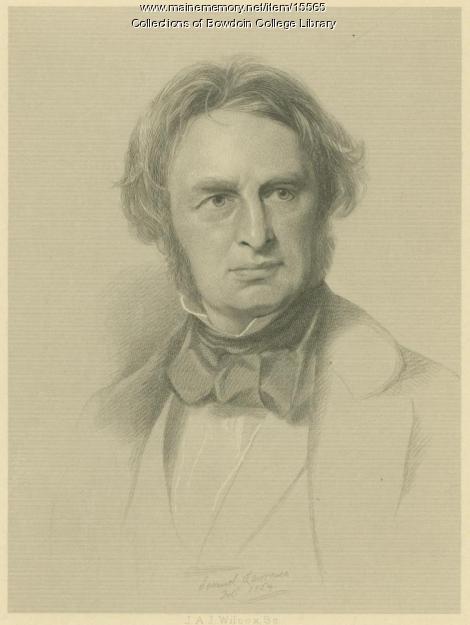 From among that field, first choice for our bard is Longfellow because he, like Galpin, lived in Stockbridge.

He built a house, a corn house, hog house, cider cellar, a barn and called it his farm. On August 5, 1856, he purchased a final five acres. We have a poet and farmer. Did he know Galpin?

According to local historian Richard Wilcox, “Robert E. Galpin [was] the Man Friday for Henry W. Longfellow during Longfellow’s tenure as a landowner and visitor to Stockbridge.”

So was Galpin writing to Longfellow? There are further clues in the words of the poem:

“An’ such shoon as thou does wear.” “Shoon” are shoes and Longfellow was well known for his flamboyant dress including embroidered yellow waistcoats and fancy footwear.

“Doesticks” was the pseudonym for Mortimer Q. Thomson, who was known for writing a parody of Longfellow’s very famous poem “Song of Hiawatha.” “Doesticks on a Bender” was the title of a satiric piece written for the New York Evening Post. It was described as full of “dashing and extravagant drolleries.”

At the end of the poem there is a farewell and an anticipation of a welcome as time goes by. That would have been an annual event, the rhythm of their friendship. Longfellow was “a permanent summer resident;” a man who came and went with the seasons while Galpin stayed in Stockbridge.

All the clues point to a poem written by Galpin to his friend and well-known poet, Longfellow. It is just possible that both mysteries are now solved. Here’s the part where research and a good murder mystery are very different: it could take years to find the crumb of evidence that proves it.

— Tom Stoppard
Read next: THEATRE REVIEW: 'The Rose Tattoo' at Williamstown, a definitive production, not to be missed