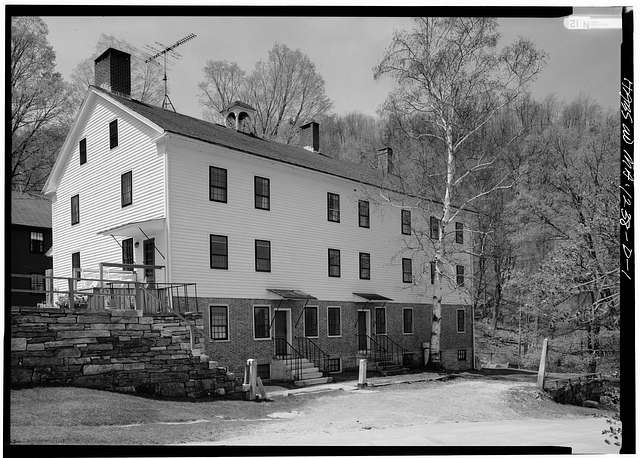 They came a few at a time starting in 1735. By 1739, at the same time that Stockbridge was newly incorporated and Sheffield was six years old, the area was officially recognized. It was called Housatonic Township Number One. The newcomers formed two settlements: one on Hop Brook (modern Tyringham), and the other on the Konkapot River (modern Monterey).

By 1761-62 Township Number One met the criteria set by the General Court to incorporate. The people built a school, a church and a minister’s house, hired a minister and divided the land into proper lots. The township was incorporated under its new name — Tyringham — named after an English village.

The minister arrived in Tyringham in 1750 almost a decade before incorporation. He was a Yale Divinity School graduate. The Rev. Adonijah Bidwell’s house stands to this day, a museum commemorating an earlier time in America. The meeting house (Congregational Church) was also built years before Tyringham was incorporated.

The new town hustled and bustled. In addition to church and minister, it had 182 dwelling houses, 40 shops, two tanneries, four potash works, and four grist- and sawmills. Originally an agricultural economy, it soon developed cottage industries and manufactories.

On May 6, 1775, at his farm in Williamstown, Nehemiah Smedley served eggs and bacon to Arnold. Arnold was on his way to Fort Ticonderoga. Berkshire County was a crossroads, and in the run up to the Revolutionary War, soldiers, camp followers, and providers of goods and services to the troops moved through Berkshire. Traveling from Boston, Arnold crossed the north part of the county and arrived at Smedley’s farm on May 6.

In those days, farmers commonly rented rooms to travelers, and Arnold’s visit is confirmed by documentation: “The Honorable Provincial Congress of Massachusetts Bay To B. Arnold, Dr. May 6 To dinner and lodging, 4s.10d; paid Nehemiah Smedley 60s”

To his superiors, Arnold suggested capturing the fort at Ticonderoga. It was remote, relatively unprotected and had what the rebels needed: an impressive arsenal. Arnold proposed the guns be captured and brought back to Boston to secure the port.

Arnold was considered a smart tactician and able soldier; his plan was approved. He was given the rank of colonel. He set out for Fort Ticonderoga with high hopes. Arnold thought he would be a great commander and hero of the Revolution. Sadly, at Ticonderoga, he met Ethan Allen and his Green Mountain Boys. A fight began over the command and Allen won.

They captured the fort and the arsenal as Arnold predicted, but when the battle was won, someone else, not Arnold, was sent to carry word of victory to Boston. Arnold’s role was diminished, and someone else was appointed to escort the guns and cannons to Boston.

Henry Knox carried word and escorted the guns to Boston. He passed through Tyringham along what is now commemorated as Knox Trail.

Knox delivered the guns. The cannons were used to end the Siege of Boston Harbor. The rebels won an important victory. Knox and his trail were celebrated; Arnold was demoted and resigned.

After the war, in 1786, Tyringham produced 1,185 barrels of cider; 2,500 acres of the land was “improved” for tillage and housing. Two thousand acres were mowed for hay and 3,000 acres used as pasture. By design, 10,000 acres remained undeveloped woodland and waterways.

Tyringham had 500 horses, 800 pigs, 178 oxen, 500 cattle and 500 milk cows. Tyringham was large and economically successful. Still, the large incorporated town struggled to unite its two halves. Geography was literally in the way. The northern and southern parts of town were separated by “a high range of hills spreading east and west,” making communication between the two parts of town formidable.

In 1792, Jerusalem, a Shaker village, was founded in Tyringham. At first the Shakers flourished. The settlement covered 2,000 acres. Among the structures were mills and workshops. Within 50 years, there was a decrease in population. Some members left the fold; others moved to the Shaker settlement in Hancock. By 1874 the settlement was gone and the land sold. The road was named Jerusalem Road, and the site placed on the National Register of Historic Places.

Set down between, the Shaker settlement further complicated communication between the two halves of Tyringham. Even before the Shaker village dissolved, Tyringham yielded to the pressure. It was almost 100 years — 1847 — but eventually Tyringham divided in two, creating a new town. First it was called Green Woods, then South Tyringham, and finally Monterey (a name that commemorated a battle fought and won in the Mexican American War).

Housatonic Township Number One had a bright and interesting history and a vibrant economy. Today Tyringham and Monterey are rural residential communities. Tyringham has a population of 316, and Monterey, 961. The villages have historic sites, including the Bidwell House Museum, Knox Trail, Jerusalem, the Shaker settlement, and natural sites including Beartown State Forest and Lake Garfield. The sum is a beautiful and interesting corner of Berkshire.