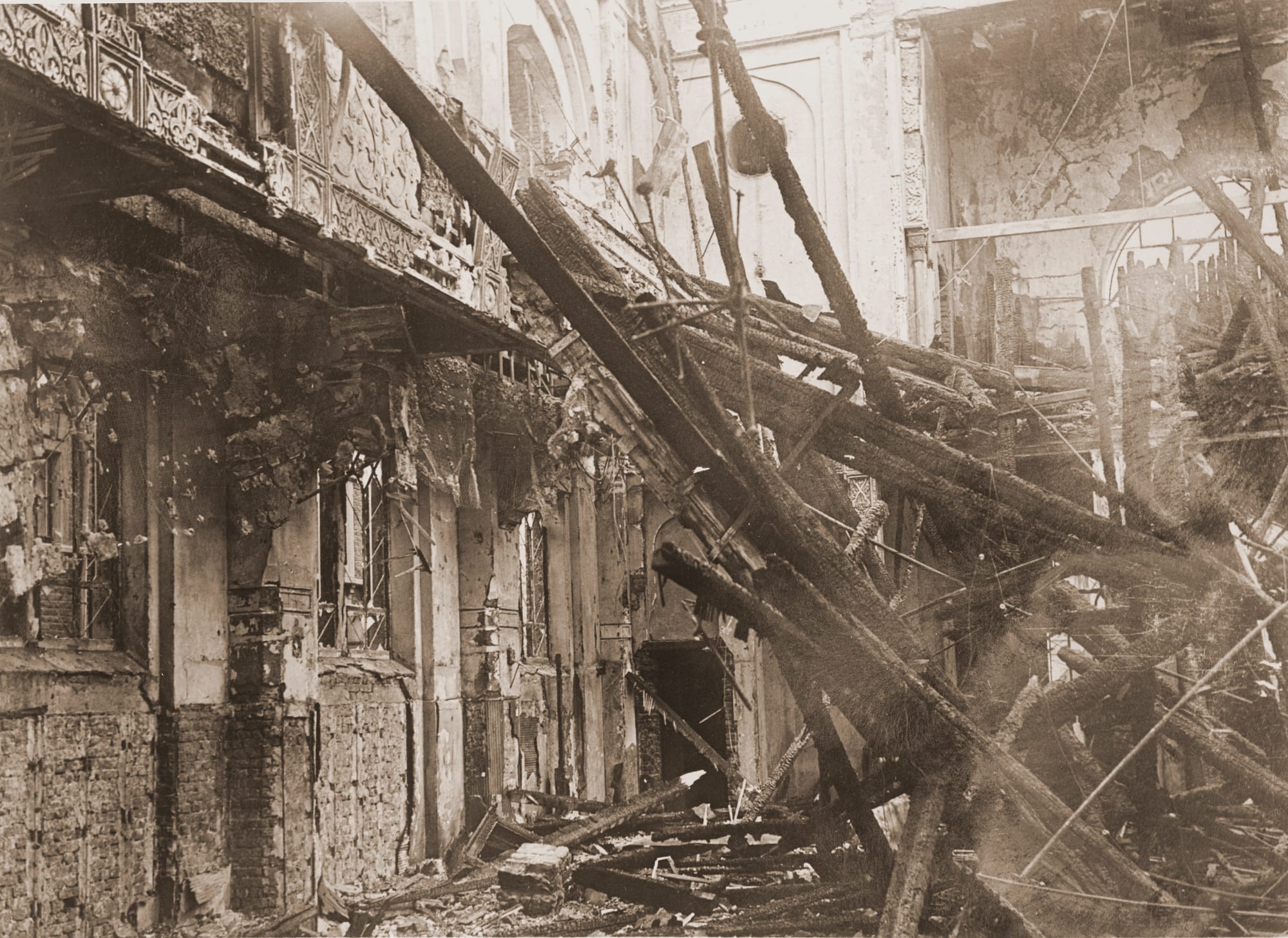 “Kristallnacht,” according to professor Michael Berenbaum, “is German for Crystal Night …”

Sounds romantic and is anything but.

Berenbaum goes on, “… also called Night of Broken Glass or the November Pogroms, the night of November 9-10, 1938, was when German Nazis attacked Jewish persons and property.”

One thousand Jewish synagogues (houses of worship), more than 7,000 Jewish-owned businesses as well as homes were destroyed, and 100 Jews were killed. Violence spread beyond Germany’s border. Almost all 100 killings happened in Austria. In Germany the violence lasted two days. In other places it continued much longer.

The violence was ordered by Adolph Hitler through his Minister of Propaganda, Joseph Goebbels; and executed by his SA (Sturmabteilung), commonly called Storm Troopers or Brown Shirts. Hitler promised that only he could and would restore peace. Hitler promised the return of law and order.

Jews were blamed for the violence and punished. Jews were stripped of their citizenship, “Only Aryans could be citizens.” Their guns were seized and even if they rebuilt businesses, no German citizen was allowed to do business with a Jew. Even if they rebuilt their houses of worship, they were not allowed to congregate. Removal to the death camps followed. How is it the victims were blamed and the perpetrators were cheered?

Nov. 7, 1938, in Paris, a German diplomat, Ernst vom Rath, was killed by a Polish student, Herschel Grynszpan. Grynszpan was Jewish. Hitler saw the opportunity to solidify his power at the Jewish community’s expense.

Hitler was attending a celebration in Munich when the news reached him. It took Hitler no time to act. He instructed Goebbels “to harangue a gathering of old storm troopers, urging violent reprisals and telephone orders from Munich to trigger pogroms throughout Germany.”

Hitler activated the SA. According to Britannica.com, the SA was “a paramilitary organization formed by Hitler in 1921 whose methods of violent intimidation played a key role in Hitler’s rise to power… [comprised of] Freikorps, armed freebooters, they wore brown shirts styled after Mussolini’s Black Shirts.”

Just before midnight on Nov. 9, Gestapo chief Heinrich Müller sent a telegram to all police units informing them that “in shortest order, actions against Jews and especially their synagogues will take place in all of Germany. These are not to be interfered with.” Rather, the police were to arrest the victims. Fire companies were to stand by “unless fire threatened Aryan properties.”

As rioting and destruction continued, local police arrested approximately 30,000 Jewish males aged 16 to 60. To accommodate so many, the concentration camps at Dachau, Buchenwald and Sachsenhausen were expanded.

When it was over, the public was told the violence was a “spontaneous demonstration” of ordinary, good German citizens incensed by the outrage perpetrated by a Jew in Paris. That was Kristallnacht 1938. Hitler’s power was secured and the Holocaust begun. The whole violent, destructive outrage was given the oddly poetic name Kristallnacht.

In the final analysis, it was shattering not just of glass, but also of Jewish existence in Germany. After Kristallnacht, the cost of the broken window glass alone came to millions of Reichsmarks. The Reich confiscated any compensation that insurance companies paid to Jews. Jews were made to clear the rubble of their own synagogues. The Nazi government barred Jews from schools on Nov. 15, and in late November, local authorities were ordered to impose curfews. By December 1938, Jews were banned from most public places in Germany. Existing as a Jew in Germany was becoming impossible.

The Nazi government imposed an additional fine of one billion Reichsmarks (about $400 million) on the Jewish community. In a public statement, Nazi party leader Hermann Goring made clear that the fine was assessed to discourage any more violence perpetrated by Jews. The victims became the perpetrators; both cause and consequence were laid at the feet of the Jews.

Goring said, “I would not like to be a Jew in Germany.”

Rev. Al Sharpton said, “For Blacks in America it’s not so good.”

Trump said, “Peaceful protestors? … They are anarchists, arsonists and agitators.”

In 2020 Trump started speechifying about law and order. Trump blamed Democratic governors and Black Lives Matter demonstrators. By executive order, Trump sent paramilitary troops to stand against peaceful protestors. The troops apparently came from Department of Homeland Security. In Kenosha, a minor with an AR-15-style rifle was among self-styled “protectors” who came to Kenosha from out of state allegedly encouraged by Trump’s words. Video images show the local police apparently thanking them for coming. Local police offered the minor water just before the minor shot three people, killing two. John Pierce, of Pierce Bainbridge, attorneys for Rudy Giuliani, now represents the minor.

On Jan. 20, 2017, Trump was inaugurated. Three years and eight months later, America is sicker, with over 5 million suffering and 180,000 dead; poorer, with more unemployed than at any time since the Great Depression 90 years ago – and unwelcome in most other countries. At home, there is violence in the streets.

Democracy is participatory government. For more than two centuries, voters argued over policy and assumed decency. Both sides agreed on foes and dangers, laws and facts, and argued nuance.

When John Adams (president 1797-1801) came into the White House in November 1800, he had the following engraved above the fireplace: “May no one but good and honest men live under this roof.” Adams seemed to know our form of government demanded that the people never elect a conman or a crook.