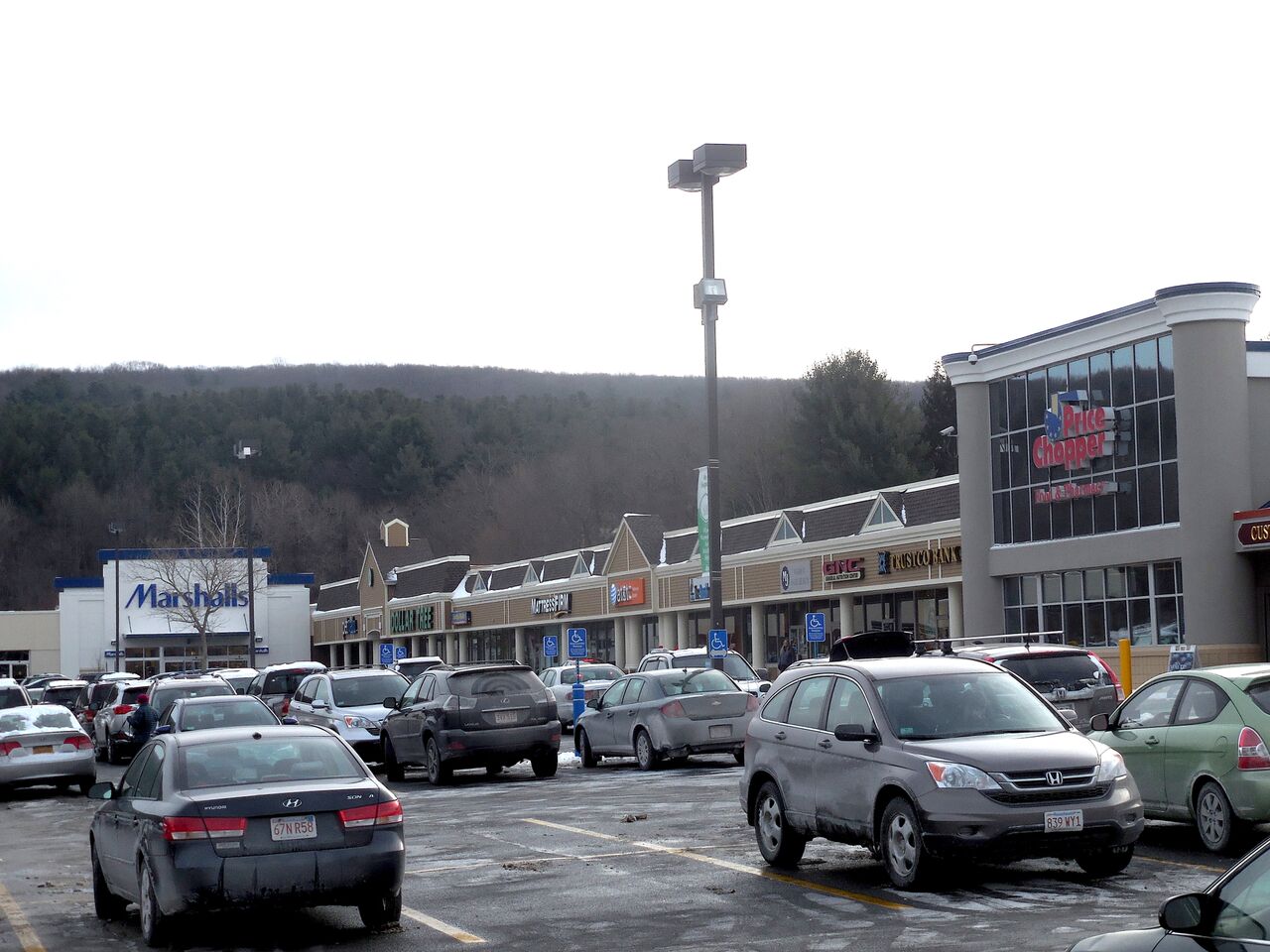 Great Barrington Real Estate LLC purchased the plaza on Stockbridge Road Dec. 7, 2017, for $16.1 million, according to records at masslandrecords.com and the Southern Berkshire Registry of Deeds.

Great Barrington Real Estate LLC is a newly formed company belonging to Paragon Realty Group of Westport, Connecticut, according to the office of Secretary of the Commonwealth William Galvin.

Paragon is a private real estate investment, development and management company that now owns or manages 32 retail properties in 11 states. Barrington Plaza is its only property in Massachusetts.

The registry of deeds also disclosed that the buyer took out a $13.27 million mortgage to complete the transaction. The lender was Bankwell Financial Group of New Canaan, Connecticut.

The plaza seems to be on the rebound after losing three tenants in the past 13 months. Both Radio Shack and Olympia Sports closed. Late in 2016, one of the anchors, the 52,000-square-foot Kmart store, closed. That left a large hole at the eastern end of the plaza.

That year Sears Holdings, Kmart’s parent company, announced it was closing almost 150 underperforming stores. The closing of the Great Barrington Kmart was a cause for concern locally because it was the only place for miles around to buy inexpensive new clothing and common household items.

Kimco was able to fill part of that space a couple of months ago when Marshalls, a Framingham-based chain of American and Canadian off-price department stores owned by TJX Companies, opened a store just in time for holiday shopping. The 46,000-square-foot Price Chopper supermarket remains the largest retailer in the plaza.

Wright said Barrington Plaza is technically the company’s second shopping center in Massachusetts. Paragon owned a grocery-anchored plaza in north-central Massachusetts for many years before selling it in 2007. Wright said Paragon is “very excited to return to Massachusetts” with this expansion into the Berkshires.

There are now 14 tenant spaces in the plaza. Three are currently available. This includes the former Radio Shack and Olympia Sports spaces plus the remainder of the former Kmart space, which is 28,414 square feet but could be subdivided into two spaces, Wright explained.

As for any potential changes at the plaza, Wright said, “Barrington Plaza is a good shopping center with a strong complement of tenants. Our goal is to fill up the remaining vacant space with complementary businesses, which will also likely involve a renovation of the façade for the space next to Marshalls.”

As for the Price Chopper, the company announced three years ago that it would rebrand its eligible stores to the more upscale Market 32. The new stores, one of which opened recently on Hubbard Avenue in Pittsfield, more resemble an outsized Whole Foods than a traditional supermarket.

The Price Chopper store in Lee was too small for conversion to a Market 32 and so it closed last year, though a spirited group is actively trying to find a replacement. There were rumors that the Great Barrington store would be closed for similar reasons, but Mona Golub, vice president for public relations and consumer services at Price Chopper, told The Edge, “We have no current plans to close any of our other 130-plus stores, in the Berkshires or elsewhere.”

The Market 32 brand is scalable, Golub explained, and her company has converted and built new Market 32s that range in size from 40,000 to 83,000 square feet. The Great Barrington Price Chopper totals 46,000 square feet and is therefore scalable.

In 2014, Golub Corporation, Price Chopper’s parent company, announced a $300 million rebranding and renovation of its properties over the next five years into Market 32. Price Chopper owns stores across the Northeast, including in New York, Connecticut and Massachusetts and has about $3.6 billion in annual sales.

According to the Great Barrington assessor’s office, for the fiscal year 2017, Kimco was the third largest taxpayer in town, behind only Big Y and National Grid. Kimco paid $152,243 per year in property taxes based on an assessed value of almost $10.5 million.

The Kmart Plaza has a checkered history, according to historian Bernard Drew, author of “Great Barrington: Great Town, Great History.” The vacant property was set to become a drive-in movie theater in 1971 when it ran into a “zoning snag.”

In 1972, a Providence, Rhode Island, developer was given the green light to build a shopping complex of almost 100,000 square feet with parking for 639 cars. It opened in April 1973 with a Grant City (a larger rebranded W.T. Grant’s) as its anchor in the spot where Kmart would be. A couple of years later the independent bookstore the Bookloft opened, making it the only surviving store from the early days.

Grant’s closed in 1976 and Kmart opened shortly thereafter. The Price Chopper, which had moved to its current location from next to the Kmart, expanded its footprint westward in 1996. In order to accomplish this, the roadside Robert’s Liquor Mart, a bizarre-looking A-frame structure, was demolished.