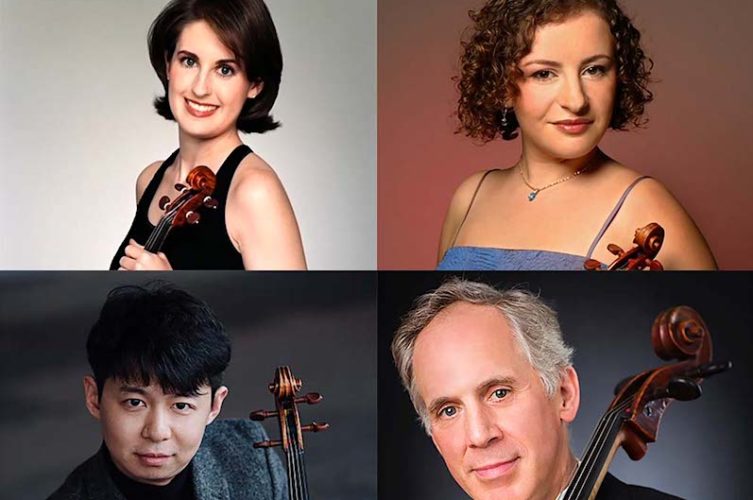 Four players from the New York Philharmonic Orchestra will appear in recital Sunday, June 5, at 3 p.m., as a benefit for Clarion Concerts. Photo courtesy Clarion Concerts

Editor’s note: The date and location of this concert has been updated from a previous version of this article.

EGREMONT — Four players from the New York Philharmonic Orchestra will appear in recital Saturday, June 18, at 3 p.m. at a Saint James Place in Great Barrington. Tickets are $75 each and available online. It’s an all-star ensemble to be sure, but the main reason you want to hear these musicians perform is that you want to support the presenting organization, Clarion Concerts. This event is their annual fundraiser.

Just because you play violin for the New York Philharmonic doesn’t mean prominent conductors will be falling all over themselves to put you in the spotlight as the soloist for major works. But if you are Principal Associate Concertmaster Sheryl Staples, you are the rare exception. After performing the Tchaikovsky Concerto in 1999, with Kurt Masur conducting, Staples went on to perform concertos by Mendelssohn, Mozart, Haydn, Bach, Vivaldi, and others, under the batons of conductors such as Lorin Maazel, Sir Colin Davis, Alan Gilbert, Kent Nagano, Jeffrey Kahane, and the orchestra’s current music director, Jaap van Zweden. Other orchestras she has soloed with include the Cleveland Orchestra, Los Angeles Philharmonic, and the Richmond and San Diego Symphonies.

Staples has received high praise from the New York Times for being a “perceptive musician who plays with great rhythmic integrity and a lucid sense of phrase structure.” They also said she “draws a wonderful array of vibrant and luminous colors…interpretive honesty and unmannered elegance.”

All orchestral musicians have their favorite composers and works. It’s useful to know who and what they are, because understanding how music resonates with individual players can enhance your listening experience quite a bit.

In the case of Yulia Ziskel, we have an inside scoop on her personal music preferences: her own CDs. For example, her release on the Sonoris label includes works by Wieniawski, Tchaikovsky, Ysaye, Brahms, and Paganini. So, without even hearing any of her recorded performances, you already know she’s an unabashed fan of the most fun and dramatic violin literature of the romantic period. Now, you can listen to her play it live.

Cong (pronounced “Ts’ong”) Wu joined the New York Philharmonic as Assistant Principal Viola in 2018. He has made solo appearances with the Santa Barbara Chamber Orchestra, Macau Youth Orchestra, and New York Classical Players. And if you think Mr. Wu is bound to collaborate with today’s most influential classical musicians (in addition to the ones sitting next to him in the orchestra), you would be quite correct. Cellist David Finckel, co-director of the Chamber Music Society of Lincoln Center and formerly with the Emerson Quartet, is one of many prominent musicians with whom Wu has collaborated. Add to the list Itzhak Perlman, Peter Wiley, the American String Quartet, and Wu’s former teacher at the Manhattan School of Music, Pinchas Zukerman. These are Mr. Wu’s peers.

If you ever get the chance to hear a musician who has played with both the New York Philharmonic and the Orpheus Chamber Orchestra, you should take it. The two orchestras function differently, one relying on a conductor to keep the band together, the other going conductorless, with all 34 musicians rotating leadership roles democratically. One would expect such a player to have the utmost sensitivity in matters of ensemble. And Bartlett certainly does — but he also has the skills to match. So expect extremely tight playing from this group.