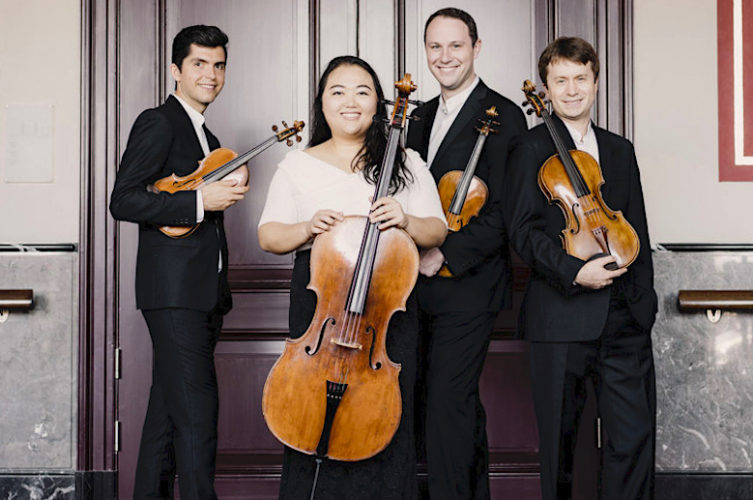 It’s hard to imagine a more appropriate piece of music for September 2021 than Beethoven’s String Quartet in A minor, Op. 132. The composer, after an extended period of illness and gloom, inscribed its third movement with the words, “Holy song of thanksgiving of a convalescent to the Deity, in the Lydian mode.” When the work received its public premier in 1825, the response was underwhelming — only a handful of Beethoven’s friends and fans liked it, and half of them were in the band. Now, Op. 132 is a universally recognized masterpiece.

Within two years of forming at the Colburn School in 2010, the Calidore String Quartet had won grand prizes in most of the major U.S. chamber music competitions. In 2016, the group made international headlines as winner of the $100,000 Grand Prize of the 2016 M-Prize International Chamber Music Competition. The group received a 2018 Avery Fisher Career Grant, a 2017 Lincoln Center Emerging Artist Award, and more other major awards than you can name.

The Calidore String Quartet has decisively gobsmacked critics all over the world, with the New York Times’ Corinna da Fonseca-Wollheim writing of the ensemble’s remarkable blended sound, “grunge-band grit,” and “irrepressible dramatic instinct.” The Scotsman enthused, “This is an ensemble as capable of whipping up storms as enchanting us with breathless moments of utter magic.” The Los Angeles Times was “astonished.”

Felix Mendelssohn’s gorgeous String Quartet in A Minor, Op. 13 opens Sunday’s show, followed by Dmitri Shostakovich’s haunting String Quartet in C Minor, Op. 110. So, there truly is something on the program for every taste. The group has performed these pieces innumerable times over the years, so you can count on performances of breathtaking precision and nuance.

Tickets for South Mountain Concerts’ presentation of The Calidore String Quartet on Sunday, Sept. 12, are $40. For more information, click here.