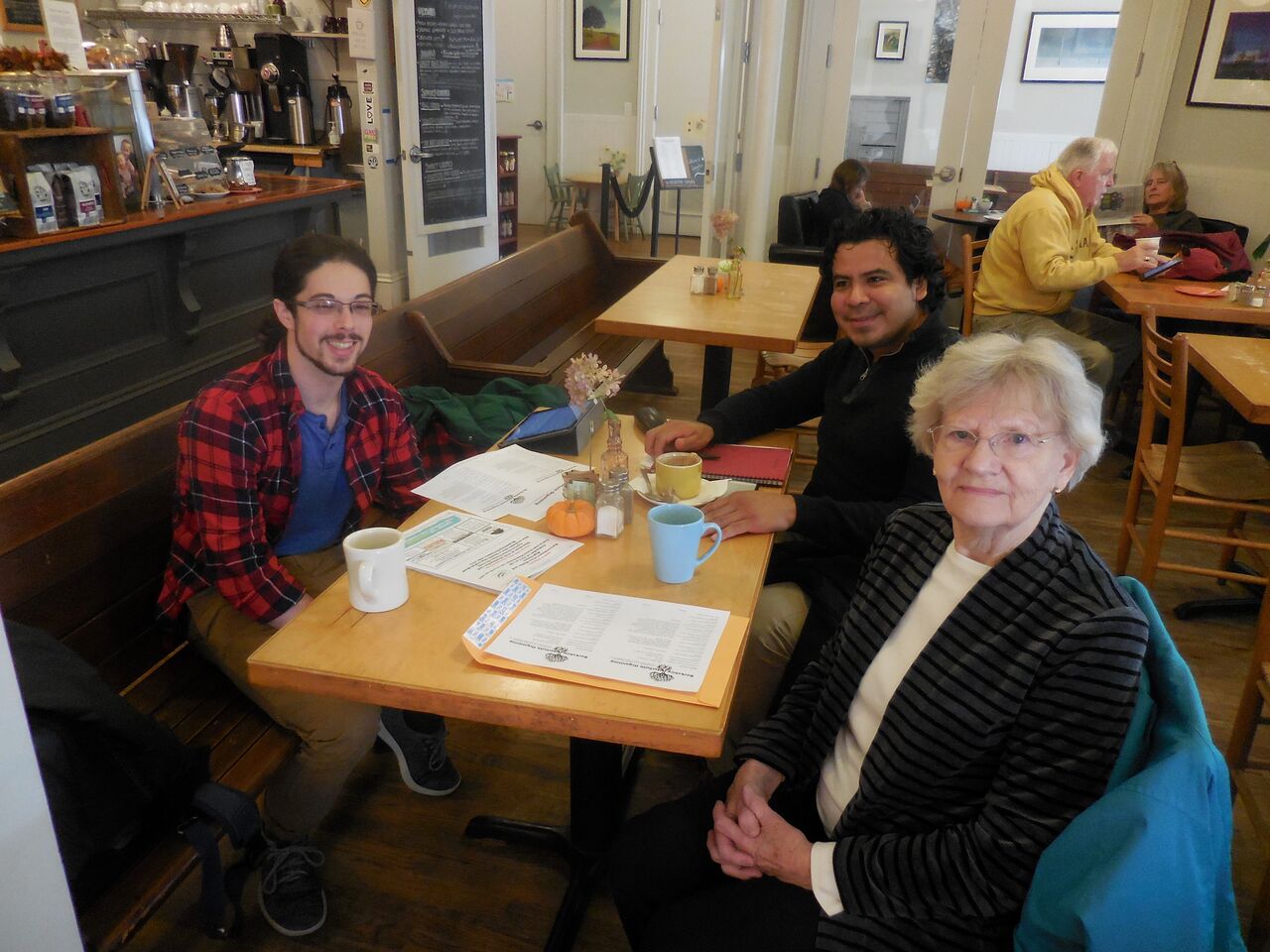 Lee — Coping with change is a challenge for just about anyone over 30. But Lee’s most vulnerable residents are struggling with the kind of elemental change that has worsened their standard of living.

Access to affordable food for downtown residents without cars has been significantly altered since the Price Chopper on West Park Street closed July 29. The move by the company, made public July 13, seemed inevitable, what with Price Chopper announcing three years ago that it would rebrand its eligible stores to the more upscale Market 32. The new stores, one of which opened recently on Hubbard Avenue in Pittsfield, more resemble an outsized Whole Foods than a traditional supermarket.

But the closing of the Price Chopper in downtown Lee, far too small to be converted to a Market 32, has hit this mostly working-class town hard. Indeed, the closing triggered a scramble to find transportation for the elderly and members of the town’s immigrant community who live downtown and do not have cars.

The nearest market is now the Big Y near the intersection of routes 20 and 112 and on the other side of the busy Mass Pike interchange. That’s a mile away, or about 20 minutes traveling time on foot.

“As soon as it was announced, we had people on the ground,” said Jeff Lowenstein, a community organizer for Berkshire Interfaith Organizing, a Pittsfield-based community organizing group whose primary goal is “to alleviate the root causes of poverty” in the community. “We started speaking with people and urging them to share their stories about how this affects them.”

BIO representatives attended a July 27 meeting at the Lee Council on Aging. There were about 50 people there. Lowenstein said BIO came away from the meeting convinced that the “loss of access to healthy affordable food within walking distance” needed to be addressed.

“They were very accommodating,” said BIO member Madelyn Tremblay, referring the one remaining supermarket in town. “The Big Y regional manager listened carefully to all our hardships.”

Officials at BIO have started a search for a food retailer that might be willing to occupy the former Price Chopper space. Two names that came to mind, Whole Foods and Trader Joe’s, were ultimately eliminated because they would have been less affordable than Price Chopper.

“There’s no value to the community in bringing in a store that has higher prices than Price Chopper,” Lowenstein explained.

Lowenstein said he and his colleagues finally settled on Price Rite, a chain of relatively limited-assortment supermarkets, and ALDI, a discount supermarket chain based in Germany. They have written letters to both companies and have received courteous replies but thus far no commitments. They’re trying to set up meetings with company officials.

BIO made a similar effort, thus far unsuccessful, when the Price Chopper in North Adams closed in February 2016.

BIO was especially concerned about the situation in Lee because there are three senior-housing complexes within a mile: Hyde Place, Crossway Village and Brown Memorial Court. There is also low-income housing nearby and housing for members of Lee’s immigrant community, many of whom work in downtown restaurants and do not have cars.

“It was so convenient,” said BIO member Thomas Ramirez, a Guatemalan immigrant who works as a handyman and a line cook at a downtown restaurant. “They would stay open until midnight.”

And it’s not only immigrants and the elderly who miss the Price Chopper. Longtime Lee resident Andrea Wadsworth is not only a public official (a justice of the peace and elected town representative), but a master pastry chef.

“On many occasions, I would shop at 11:30 p.m.,” Wadsworth recalled. “I would buy mass amounts of flour and sugar with a laugh and a smile from the staff. They shared in my baking life for over 25 years.”

Wadsworth described the people who worked at Price Chopper as “family” whom she knew by name. The store itself “had character,” she told the Edge.

“Not to mention, the prices on groceries were less, produce was better and access was quick and easy,” Wadsworth added. “I absolutely miss this store. It was part of the heart of downtown … It’s such a shame.”

A number of responses have been organized in response to the closure of the Price Chopper. Chef Express, a casual Indian food restaurant on Main Street that opened in April, replaced Knead a Bagel. When he heard of the Price Chopper’s demise, Chef Express owner Sandeep Verma branched out from Indian food and added burgers to his menu and, perhaps most importantly, opened a full-service deli that not only serves sandwiches and prepared foods but offers deli meats sliced to order.

“Lots of older people live here, so that’s why we opened the deli,” said Verma, an immigrant himself who has lived in Lee for 10 years. “After Price Chopper closed, we also added coffee and a soda machine, breads from Berkshire Mountain Bakery. We added a lot of stuff after it closed.”

And there is the transportation end. Lee Senior Center director Pat DiGrigoli told the Edge there used to be a shuttle to the Big Y once a week but not too many people took advantage of it. Now the most popular food store with the seniors is the Price Chopper on Route 7 in Lenox.

“Big Y had been wonderful in trying to help,” DiGrigoli said in an interview.

The company declined to offer a shuttle service but approached the council on aging and discovered there were existing shuttle services twice a week, along with longstanding bus service from the Berkshire Regional Transit Authority.

“We do have a lot of elderly coming in here and shopping,” said Big Y spokesman Raanan Hartman. “They were concerned about not knowing the store but we provide them directories. I think we’ve done everything we can.”

“I think they feel the prices are better,” DiGrigoli replied.

The arrangement with Lenox came about because Thursday is the only day the Lenox Community Center driver is not using the van, so the town of Lee pays a fee to Lenox for the van service. As luck would have it, Lenox’s town manager Christopher Ketchen now also manages the town of Lee, thanks to an intermunicipal agreement signed between the two towns earlier this year.

And notwithstanding the shuttle vans going to Lenox and Pittsfield, there are the intangibles. Colleen Henry, who heads the Lee Chamber of Commerce, said in an interview that the transportation for shopping out of town is a valuable service but the downtown Price Chopper “was very important, especially for the older people who live right in the village.”

“And for older residents, there was that feeling of independence, which was wonderful,” Henry said.

And of course, the question of what to replace the Price Chopper with in its aging building remains. Henry said she loved the idea of a Whole Foods or Trader Joe’s because either one would bring lots of shoppers town.

“We would love a different reason for people to come to Lee — like a Trader Joe’s,” Henry said. “Any new draw to our town would be great.”

Of course, it is possible that Guido’s, with stores in Great Barrington and on Route 7 at the Pittsfield-Lenox line, already serves the market that would be attracted to a Trader Joe’s.

Henry characterized Lee as “a good place for people who don’t have cars because we’re right on the bus line, with the BRTA coming through.” And when a grocery store within walking distance closes, it creates a large void.

Mona Golub, vice president for public relations and consumer services at Price Chopper, told the Edge that the Lee store, at 17,000 square feet, was simply too small to be converted to a Market 32.

“We had several proprietary reasons for closing our Lee store,” Golub explained in an email. “Given the financial results, the overall location, the size and the competitive viability, it’s not suitable for conversion.”

Golub said her company has been actively marketing the property for either lease or sale since July. Golub told BIO in September that “we are actively seeking potential tenants/buyers from all channels who possess a vision for the property.”

Told that there were rumors that the Great Barrington store would be closed for similar reasons, Golub was quick to push back: “We have no current plans to close any of our other 130-plus stores, in the Berkshires or elsewhere.”

The Market 32 brand is scalable, Golub explained, and her company has converted and built new Market 32s that range in size from 40,000 to 83,000 square feet. The Great Barrington Price Chopper totals 46,000 square feet and is therefore scalable. The Lee store, which has been a Price Chopper since 1972, was “too small to contain many of the offers that define our contemporary, food-focused Market 32 experience,” she said.

In 2014, Golub Corporation, Price Chopper’s parent company, announced a $300 million rebranding and renovation of its properties over the next five years into Market 32. Price Chopper owns stores across the Northeast–including in New York, Connecticut and Massachusetts–and has about $3.6 billion in annual sales.

Last year Reuters reported that Golub was in “advanced talks” with Albertsons Companies, which is controlled by the hedge fund Cerberus Capital Management LP, to be sold for about $1 billion. Price Chopper declined to comment and the sale has not yet occurred.

“Right now our heavy focus is on getting a new grocery store,” said Lowenstein of BIO, which is gathering signatures for petitions to show ALDI and Price Rite.