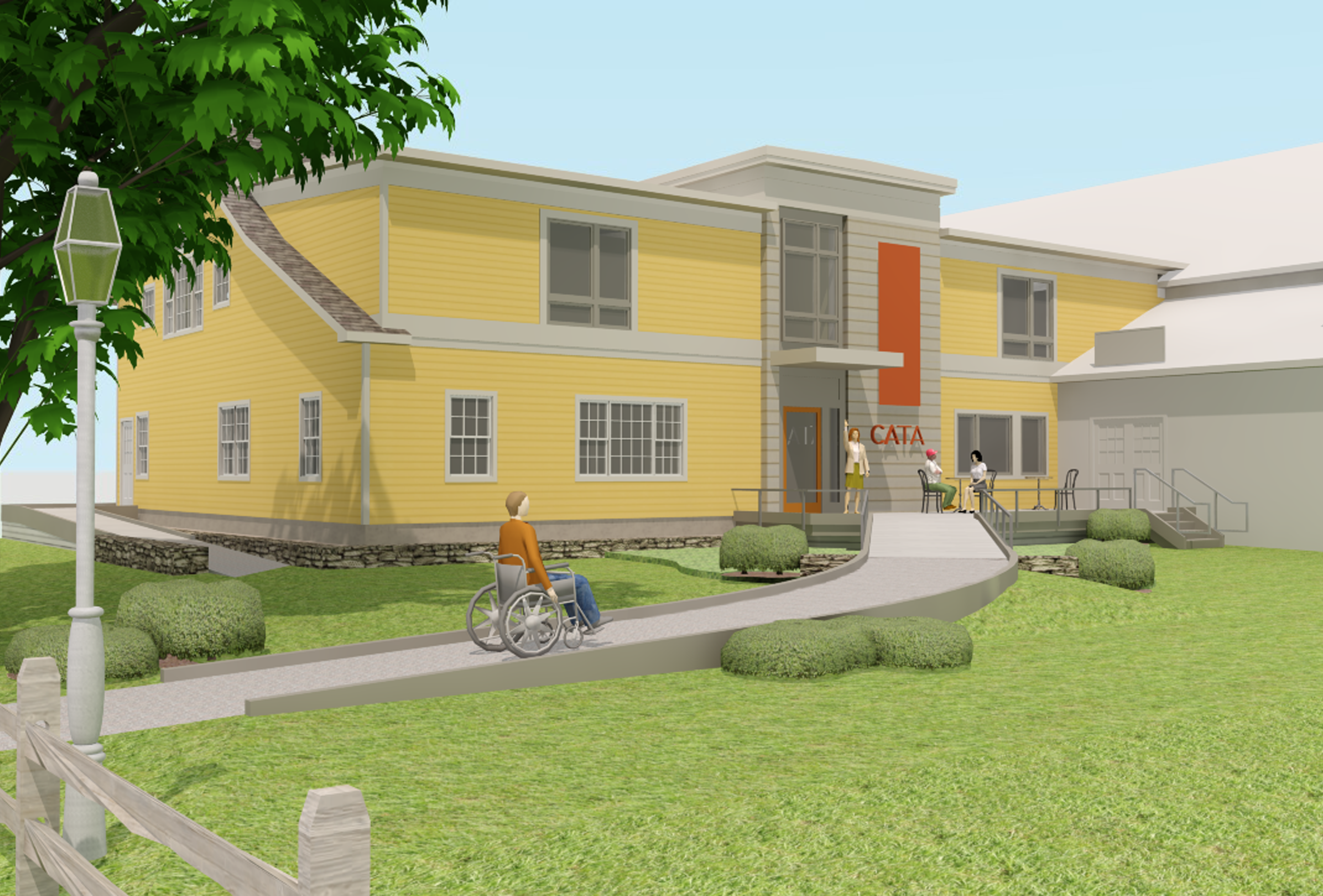 Great Barrington — Beneath clear blue skies, a team of Community Access to the Arts staff, board members and community supporters donned white hard hats and used red-handled spades to ceremoniously break ground at the nonprofit’s new digs late Monday morning (June 10). The new space, located at 420 Stockbridge Road, will establish a permanent home for CATA and allow the organization to expand its innovative arts programs for people with disabilities. Margaret Keller, executive director of CATA, shared a vision for CATA’s future, one that includes: a beautiful new CATA Arts Center based on the Principles of Universal Design, including a fully accessible entrance and elevator; two large studios, one dedicated to visual arts and writing and the other to dance and performing arts; a kitchenette and lounge where CATA artists can gather for lunch with staff, faculty and volunteers; exhibit space to display paintings by CATA artists; and office space which, for the first time, positions CATA staff and artists under the same roof.

“This vision has always required space,” said Keller, who made her remarks from the grassy lawn outside the nonprofit’s new home. “Space where our artists can explore artforms and give voice to their unique perspectives. Space where our faculty can create projects that open new doors for discovery. Space where our staff can launch collaborations with partners—agencies, schools, and residences, plus museums, galleries, and theaters—to reach as many CATA artists as possible and to share their wondrous creativity with our entire community,” she added from her post in front of a banner declaring the reason for the crowd’s gathering: “Future Home of CATA!”

Over the past five years, CATA has expanded the number of artists served by 70 percent, tripled the number of students it is serving in special education programs in Berkshire County public schools and launched new partnerships with area agencies. “With all this growth, we began to bump up against the edges of the space we had rented for so many years. Quite frankly, we began to burst at the seams,” Keller said. Ninety percent of the workshops in the current CATA studio reached capacity, leaving little if any room for new CATA artists, and no space for artists who want to try new art forms.

Sen. Adam Hinds, D-Pittsfield, and Rep. William “Smitty” Pignatelli, D-Lenox—the honorary co-chairs for CATA’s capital campaign—were on hand for the groundbreaking. “CATA is an example of everything that is right in our community,” said Hinds. “It’s an example of how we translate or ideals and our principles into daily work: that we’re focused on inclusion, that we’re focused on the use of the arts to improve lives, to change lives—CATA represents all of that,” he added in a nod to the overwhelming community support for the local nonprofit, one Hinds noted will now be located on the “main drag.” Keller thanked Hinds, noting “he has also proven [to be] a strong ally [since] before he even took office.”

“The impact CATA has on those with special abilities from all around Berkshire County is clearly shown through the good work they do every day to teach their students self-expression through the visual and performing arts,” said Pignatelli in his remarks. “I am thrilled that the community atmosphere will now have a permanent home right here in Great Barrington, and I am grateful to have been a part of the celebration today,” he added. In her introduction, Keller referred to Pignatelli as “a CATA fan supporter since our earliest days” adding that “just this month, he used his advocacy to propose and push through a $50,000 earmark in the House budget for CATA’s new home.”

After renting space for 26 years, the two-story, 6,400-square-foot facility will double CATA’s existing studio space. Formerly the Renaissance Arts Center, the building will undergo an extensive renovation to prepare for its new life as the CATA Arts Center. Architects Clark & Green are leading the design of the renovation and Allegrone is managing construction. Construction is slated to begin in July, with the building opening in early 2020.

Since 1993, CATA has brought over 20,000 life-changing arts workshops to more than 2,000 people with disabilities throughout Berkshire and Columbia counties. In the last five years, CATA has dramatically increased its program offerings while expanding public programs including performances, readings and art exhibits featuring work by CATA artists with disabilities.

To support the purchase and renovation of the new facility, CATA has launched its first-ever capital campaign: the CATA Forward Campaign, with a goal of $3.2 million. Keller announced to the crowd of “loyal ambassadors and supporters” gathered on Monday that CATA recently crossed the $2 million dollar mark toward its fundraising goal. “We are thrilled to have now entered the public stage of our campaign, and we can’t wait to draw more people into the excitement of this project,” she added.

The campaign also supports pilot programs serving artists with disabilities across Berkshire and Columbia counties. CATA nurtures and celebrates the creativity of people with disabilities. Through dynamic arts workshops and public events, CATA artists tap into their potential, explore new talents and share their unique points of view with the wider community. CATA collaborates with 47 partner organizations to bring visual and performing arts programs to 800 people with disabilities across Berkshire County, Massachusetts and Columbia County, New York.