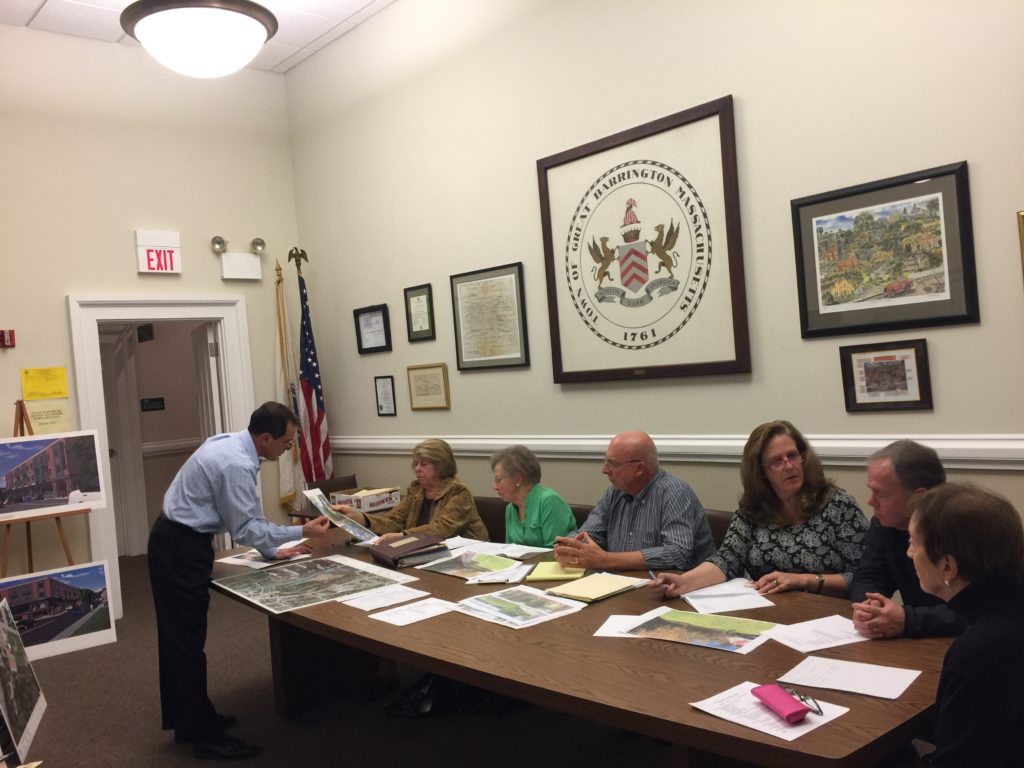 Great Barrington — At the Berkshire Co-op Market developers’ second round with the Historic District Commission, the lawyers came this time, to both charm and set the Commission straight on the proposed $15 million creation of a commercial and residential complex on Bridge Street that would replace — and expand — the existing Co-op Market.

It was a messy night at Town Hall. In the end, Benchmark Development got the green light to proceed with its plans to design a second building planned for a parcel on the historic Searles Castle property.

Benchmark Development was required to go before the Commission because one of three parcels (Site 3) it is planning to purchase and develop off Bridge Street is close enough to the 1890s-built Searles Castle that it was zoned in the historic district, giving the Commission oversight for any development there. 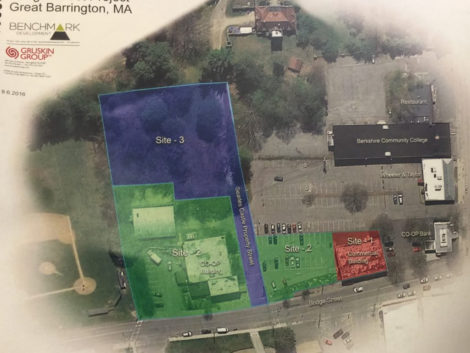 The site plan for the proposed $15 million commercial and residential development on Bridge Street that would have the Berkshire Co-op Market as an anchor tenant. Site 3, in purple, is adjacent to the Searles Castle property.

The hearing was to determine whether anything at all can be built in that spot, making it a high-stakes evening for the developers, the town, and the Co-op.

Benchmark’s Michael Charles and Brian Cohan recently rolled out plans for the project, the anchor of which is an expanded Berkshire Co-op Market on Bridge Street in a building that will also host 22 condominiums and other retail and office spaces. That’s phase one of the project, to be completed in about a year.

Phase two is 36 condominiums and a parking garage underneath them in the Searles Castle parcel that is behind the current Co-op location. It is this part of the plan that is the reason for the run-in with the Commission, some members of which were downright antagonistic to Benchmark and had made that clear at a meeting last month. 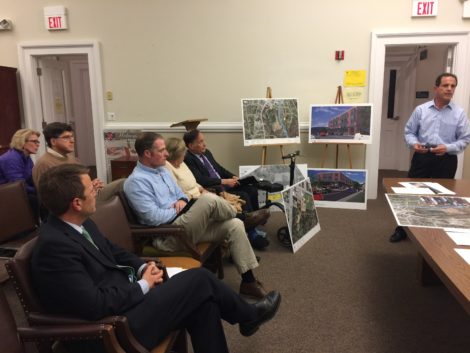 This time Benchmark attorney Nicholas Arienti was on hand to set everyone straight about what the Commission’s role is here: “The historic value and significance of the site; the appropriateness of the shape of a newly constructed building; and to make suggestions, but only those about [something] incongruous.”

Chair Don Howe didn’t like this lawyering. “You just basically told us our rights,” he said.

“That was not a good way to begin,” said Commission alternate Abby Schroeder sharply.

The Commission had had a site visit earlier in the week, though member Barbara Syer, who expressed her flat-out opposition to the project throughout the hearing, had not attended, saying she knew the property well enough.

While Benchmark doesn’t yet have design renderings for the building, Charles explained that robust tree plantings will screen the building from the Castle. And Charles has previously said that the building design will take cues from nearby early-1800s buildings rather than from the early-1900s elements planned for the Co-op building, but will be “consistent with that first building.”

Yet Charles said he was “trying to tie [the building] to the downtown but not trying to tie it to the castle,” and it is “appropriate as a business district location. We’re trying to enliven Bridge Street.”

But Syer said the tree screening near the castle wasn’t a good enough buffer. “They could be taken down in no time,” she said, and proceeded to repeat that over the course of the evening.

It left Charles asking why anyone would take down the trees, followed by Howe wondering if lightning could knock them all out at once. Member Holly Troiano looked over at Syer and asked her what, other than trees, she had in mind as a buffer: “A wall?” 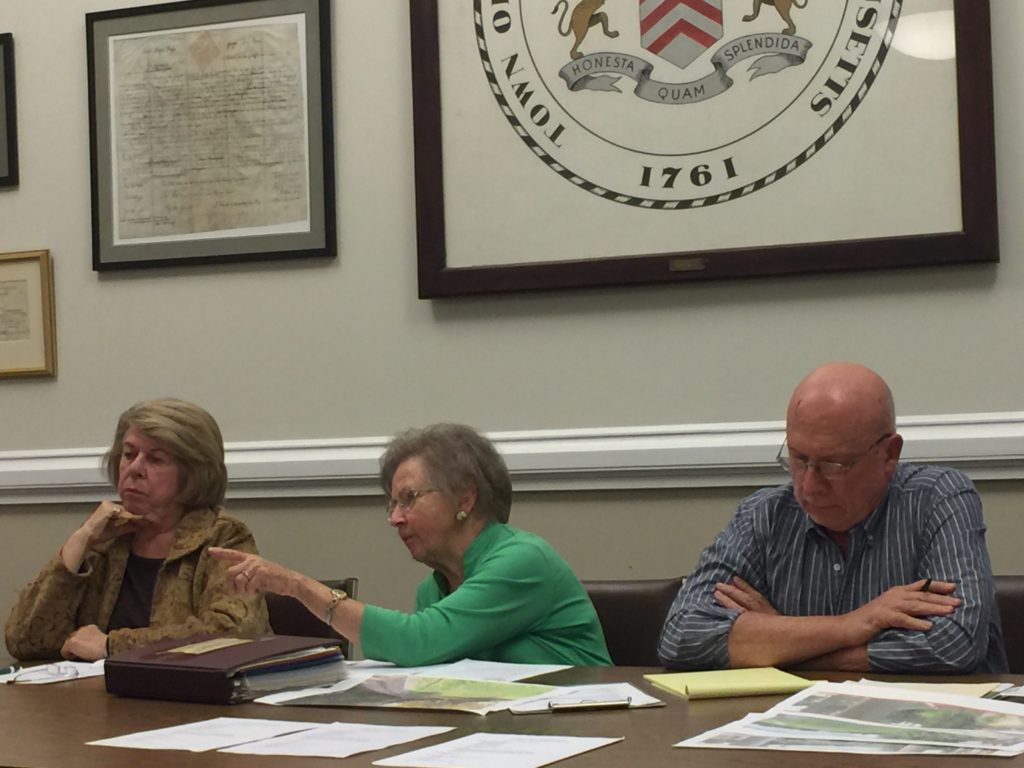 Abby Schroeder left, and Barbara Syer, center, who opposes the current plan by Benchmark Development for a 36-unit building and parking garage near the Searles property. At Syer’s right is Chair Donald Howe, who also said he is unhappy with elements of the project. Photo: Heather Bellow.

Syer shrugged. Schroeder jumped in: “It would have to be a mighty wall,” she said, prompting someone in the room to throw in a related Donald Trump joke.

It was at this moment that Co-op Board President Dan Seitz sunk his head into his hands.

Seitz wasn’t alone. The room was suddenly lit with a sense of urgency and panic that one or two people appointed to the Commission could take down what many town officials, residents and business owners see as a much-needed development.

Selectboard member Ed Abrahams stood. “I was elected to try and fix our tax base,” he told the Commission. “Play hard ball with [the developers] because they need you. I see this as an opportunity.”

Berkshire Property Agents co-owner Tim Lovett stepped forward. He said he had just come from a party thrown by the developers of 47 Railroad, another mixed-use development. At the party, Lovett said, “a lot of local business owners were talking about this hearing.” He said there is a lot of enthusiasm that this development will bring more people downtown and enhance downtown economics.

Sally Harris, who, with husband Fred Harris is redeveloping the St. James church which sits caddy-corner to the castle property, said she was “surprised” at the height of the proposed building and said she found the development generally “over-weighted with activity” for that location.

Howe said his beef was the contrast between the castle grounds and a busy development. “I think the property is more connected to the park-like setting, not the downtown,” he said, and also said he was “shocked that this sort of development could be built near the castle.” He also said he didn’t like that the mellow gravel road would be turned into a two-lane drive with blacktop.

Charles pointed out that the development meets all zoning requirements. Benchmark also plans to salvage and move the old powerhouse on the grounds and maintain it as a historic reminder of early AC/DC electricity that fed the castle and some businesses downtown. Troiano explained that Great Barrington was the first town to be lit with an electrical power network.

All five Commission members agreed about one thing: it was hard to make the determinations without a rendering of the new building even though the building itself was not the purpose of the hearing. 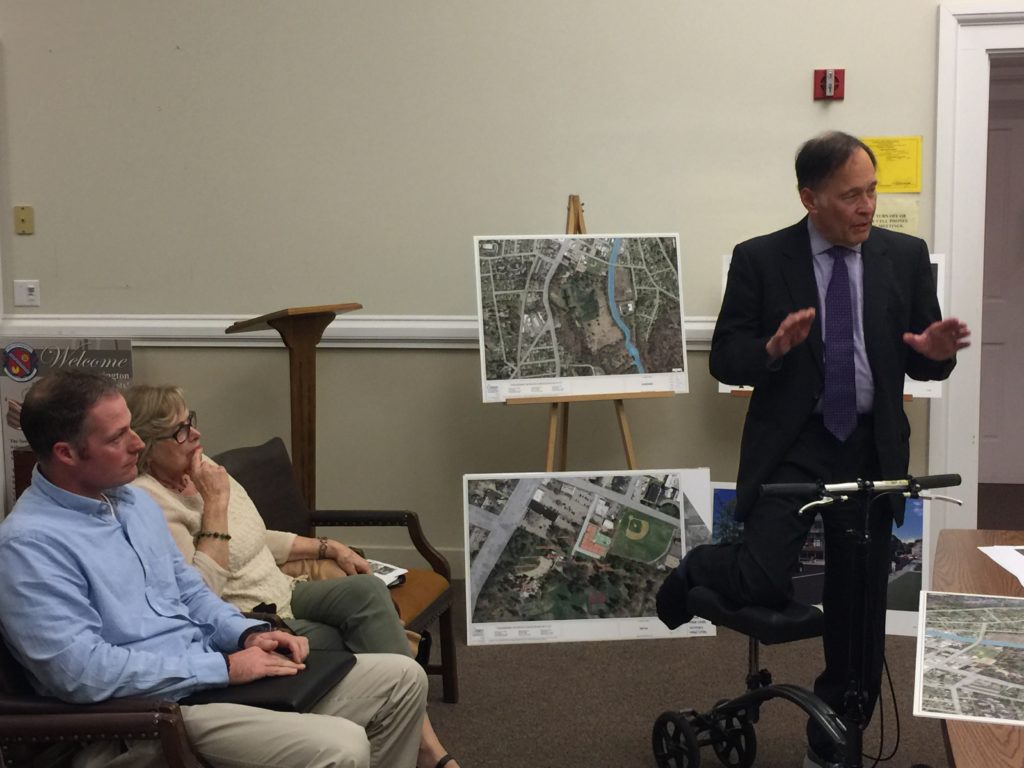 Despite a leg cast and a wheeled crutch, attorney C. Jeffrey Cook got up and told the Commission that his clients, the Bratter family, are “committed to preserving this [property] as much as anyone in this room and town. The family has taken stewardship to heart. This proposal is very consistent with that.”

For 31 years, he said, the family has struggled to keep the castle and grounds going, given years of deferred maintenance by tenants that has cost them hundreds of thousands of dollars. He explained that the blue dolomite stone from an East Mountain quarry was a “challenging material, and very expensive to deal with over the years.”

It was that deferred maintenance, Cook added, that has made the castle hard to sell over the years, leaving it sitting on the market. Its present long-term tenant is the John Dewey Academy, an expensive private school.

Yet Syer again simply couldn’t get over the tree buffer that could disappear and the possible 35-foot height of the building. Commission member Jim Mercer spoke soothingly to her.

“Great Barrington is growing,” he said. “Great Barrington has wonderful things happening. It’s a very progressive town, and this development is thoughtful to the downtown area and revenue…put it in perspective. You’re just guestimating [the height] right now.”

Mercer also reminded her that she had not attended the site visit.

Troiano agreed with Mercer and said that as long as “we protect [the castle] property, it can continue to be part of downtown.”

Given his opposition as well as Syer’s, Howe said he wanted to vote on issuing a “certificate of hardship,” meaning they’d grant the developers the go-ahead while, at the same time, saying they aren’t happy with the project.

Troiano objected, saying she “had a problem” with a certificate of hardship when only two members represented that position. She moved to vote on a certificate of appropriateness. That passed 3–2, with Howe and Syer objecting. Mercer, Troiano and member Patricia Ryan were in favor. But Howe said it required a four-member supermajority to pass.

Town Planner Chris Rembold, sitting in the back, got up, bylaws in hand. The vote only requires a a majority, he said, so the certificate of appropriateness passed.

But no, Howe said, getting up and angrily fishing the Commission’s rulebook out of a box and reading regulations that appeared to conflict with the bylaws.

Rembold later said in an email “the conflict between the Commission’s Rules and Regulations and the Bylaw will have to be addressed at a future meeting.”

Troiano said she’d be willing to put aside her “pride” over the “hardship” issue in order to allow the development to go forward and, in the end, that’s what happened.

It also appears the Commission doesn’t have the ability to deal a fatal blow to the entire project.

According to Rembold, the Commission’s “important and necessary” input “is just one of the steps needed to develop that piece of land.”

“The castle is part of the town,” Cook said, noting that selling the parcel will help the Bratter family “address the financial crunch for their continuing stewardship of the castle.”


— Michael Pollan
Read next: SOUL SUPPORT: Peace is a choice