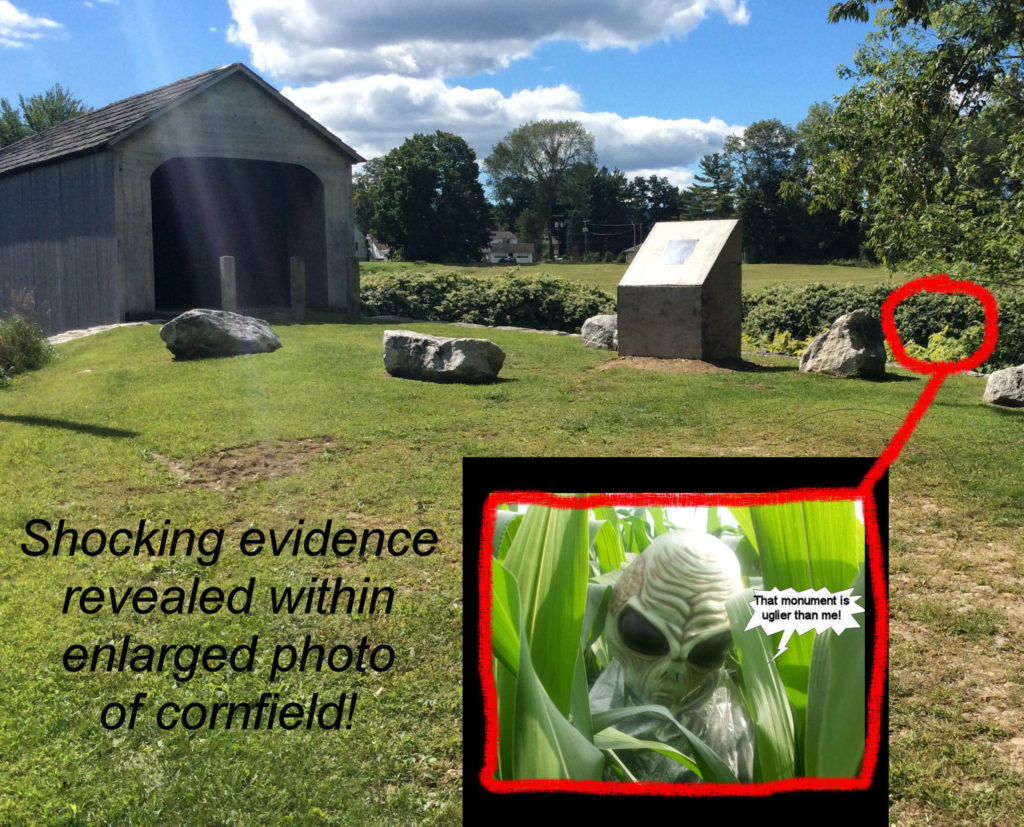 Close enounters in Sheffield – of the municipal kind

Sheffield —“Shocking” — as in “shockingly ugly” — is a word some Sheffielders used to describe a makeshift monument to an off-world incident sited near the historic covered bridge off Route 7.

Indeed, the ungainly 5,000-pound concrete slab with a thin composite plaque raised a lot of eyebrows when it was first installed during an Aug. 26, 2015, ceremony conducted by Thomas Reed, who wanted to commemorate an event that occurred Sept. 1, 1969, when Reed and others say they saw a UFO near the site.

Reed, then only 9, said he and his family found themselves “being taken aboard a tarnished circular looking vessel where an image of a willow tree was displayed,” according to Reed’s website. For years, Reed had been shopping a movie deal based on the incident. 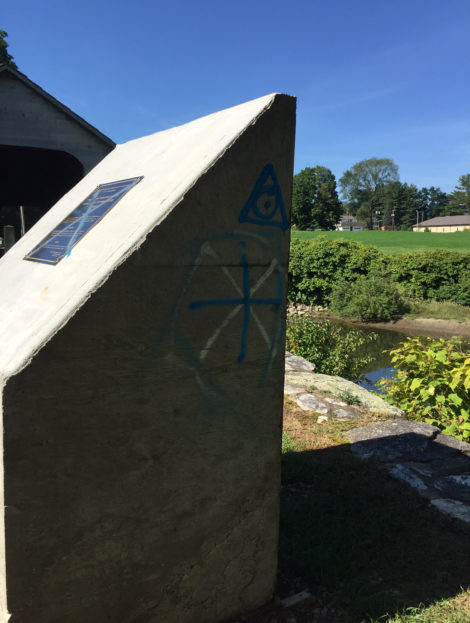 Meanwhile, many people in town were upset by the monument’s appearance. Dennis Sears, who sits on the town Historical Commission, told this reporter it as “the junkiest piece of crap I’ve ever seen.” Catherine Miller, who presided over the Sheffield Historical Society for several years in the 80s and 90s, described Reed’s monument as “a blight on the landscape.”

The town’s attorney later determined that the slab had been placed on town property and the order came down for it to be moved. While insisting town officials had told him the original location was fine, Reed later had the monument moved about 50 feet to the east onto the property of his friend Louis Aragi, who owns Pine Island Farm.

The monument was subsequently vandalized by spray paint on at least two separate occasions. But recently, a town land survey reportedly found that the slab and its accoutrements are still on a town right-of-way and Reed must relocate them or the town will do it for him.

As a capstone to this comedy of errors, this writer in his previous capacity as a reporter for another newspaper, learned an interesting fact about a citation with the signature of Gov. Charlie Baker proclaiming that the state recognizes the claim of the UFO sighting and abduction in Sheffield. 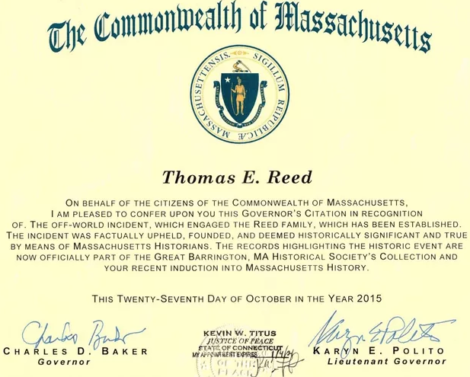 The citation from Gov. Charlie Baker’s office certifying the claim of a UFO sighting, a citation that the governor’s office now says was issued ‘in error.’

Tim Buckley, then Baker’s communications director, said in 2016 the citation was issued in error after a persistent Reed repeatedly asked the governor’s staff to put his signature on it. The text of the citation is all in capitals and is poorly written. It appears to have been notarized by a justice of the peace in Connecticut.

Only one thing could have saved the monument from the opprobrium that rained down so universally upon it: If only it had been as cute as ET.

See video below of Reed boasting about media coverage: