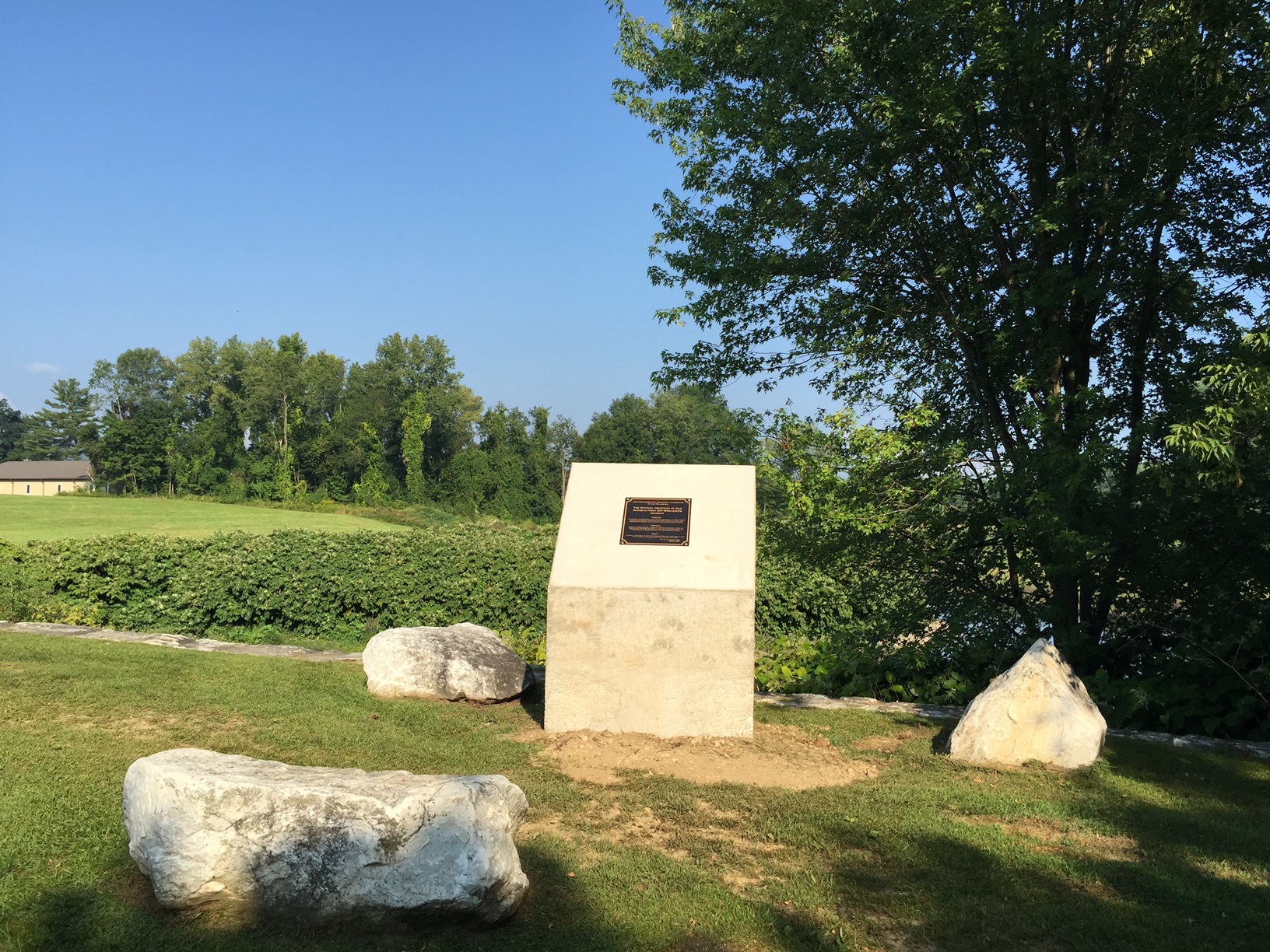 Sheffield — The concrete block was cut, embedded with a plaque, and just last week hauled to its final resting spot to be celebrated by a crowd that included news, radio and television reporters, and even a TV show.

The town’s attorney says the monument commemorating a famous 1969 UFO event is on town property and was put there without permission. The person thought to be responsible for the monument says the town told him it’s on private property.

After its unveiling last week at one end of the Sheffield covered bridge, right next to the site of what is considered a mass UFO sighting, Sheffield native and former resident Thomas Reed was told it must be removed within 10 days or it will be taken away and stored in the town’s highway garage where it will be kept for only 30 days. Beyond that, “we’ll have to decide,” said Rhonda LaBombard, Sheffield Town Administrator.

Reed said the monument was paid for by several among the 40 who say they saw that UFO in 1969. While he did not contribute financially to the monument, it was Reed who had the most extensive UFO experience near the bridge at age 9.

This kerfuffle follows the February move by the Great Barrington Historical Society to give the UFO sighting its due as something “historically significant and true,” according to a statement issued by Executive Director Debbie Opperman.

It is, Opperman wrote, “the first off-world/UFO case in US history.”

Reed’s story is famous in the UFO world and even beyond, as popular TV shows such as the Discovery Channel have widely aired that 1969 phenomenon in which Reed and his family’s UFO experience was accompanied by sounds and physiological effects. Reed even found himself inside a craft, seeing alien entities that he described as appearing “genetically engineered or manufactured intelligent insect-type being with some human characteristics, such as hands, that would stand on two feet and vary from three to five feet in height.”

Roughly 40 people in surrounding towns also reported seeing the UFO on that night. The story was reported by WSBS radio after people called the station about sightings. Reed says he and his younger brother first saw a UFO in 1966, and again in 1967.

Reed says he is working with someone in Gov. Charlie Baker’s office to have the event officially recognized by the state.

Reed’s experience was a CE IV, or close encounter of the 4th kind, and classified as having “physical evidence.” That classification system was developed by J. Allen Hynak, an astrophysicist and UFO researcher who later was scientific advisor on three UFO projects conducted by the US Air Force. In the Hynak system, a CE IV includes what is known in UFO parlance as “abduction.”

Reed, who lives in Eastern Tennessee, hates that word in this context, says it is “very stupid, childish tabloid terminology,” and he doesn’t want Sheffield to be embarrassed by it. “I think we owe it to everybody to handle it at a professional level and not turn it into some silly story…then you get the rolling eyes.”

For this reason his website says, plain as day, he will sue you if you use that word to describe what happened to him.

A fashion photographer who ran a Miami modeling management agency, Reed says he wants Sheffield to benefit from this. He says a book publisher and filmmaker are interested in the story that he sees as part of the town’s history. He hopes it might generate tourist dollars as a result.

Reed says he sees a “personal agenda” in the order for the monument’s removal.

“The town doesn’t have a problem with anything but the location of the monument,” said Selectboard Chair Nadine Hawver. “On either side is private property. If they did that we would have no interest. That’s the only issue and we have to stay consistent. People can’t just put monuments on town property without board approval.”

But Reed says it’s been a love fest for him at Town Hall. Accompanied by several people, including someone from the TV show Our New England Legends, he said that someone at Town Hall assured him—speaking with the landowner, Louis Aragi, by cell phone on the spot–that the location for the monument was private property, though the town had the right of way.

Aragi told The Edge he did not want to comment.

Someone who declined to be identified for this story, but was with Reed at Town Hall that day, says that after being shown a map at Town Hall, Reed was told it was fine to place the monument there “as long as it was on [the private landowner’s] property. They said it could be moved even closer to the bridge as long as it was private.”

“We’ve got lawyers in our back pocket,” Reed says. “Just in case it goes south.”

But Reed says he’d rather not go there. He says he simply wants the town to recognize that UFO sightings really are part of the town’s history, that in 1969 many children at the Sheffield Center School drew sketches of UFOs that now hang in the Roswell [New Mexico] UFO Museum. Roswell was the location of a famous UFO sighting in 1947.

Reed says he doesn’t understand why the town refused to make a proclamation officially endorsing or promoting the sighting.

“I don’t think Sheffield gets it. The money and the interest, the influx and tourism that will come, along with the revenue. I don’t understand the backpedaling. We did this because we want this to be a community thing.”

Reed says the monument is a way for UFO witnesses to have some acknowledgment.

“This monument is a voice for them, without them having to open their mouths.”