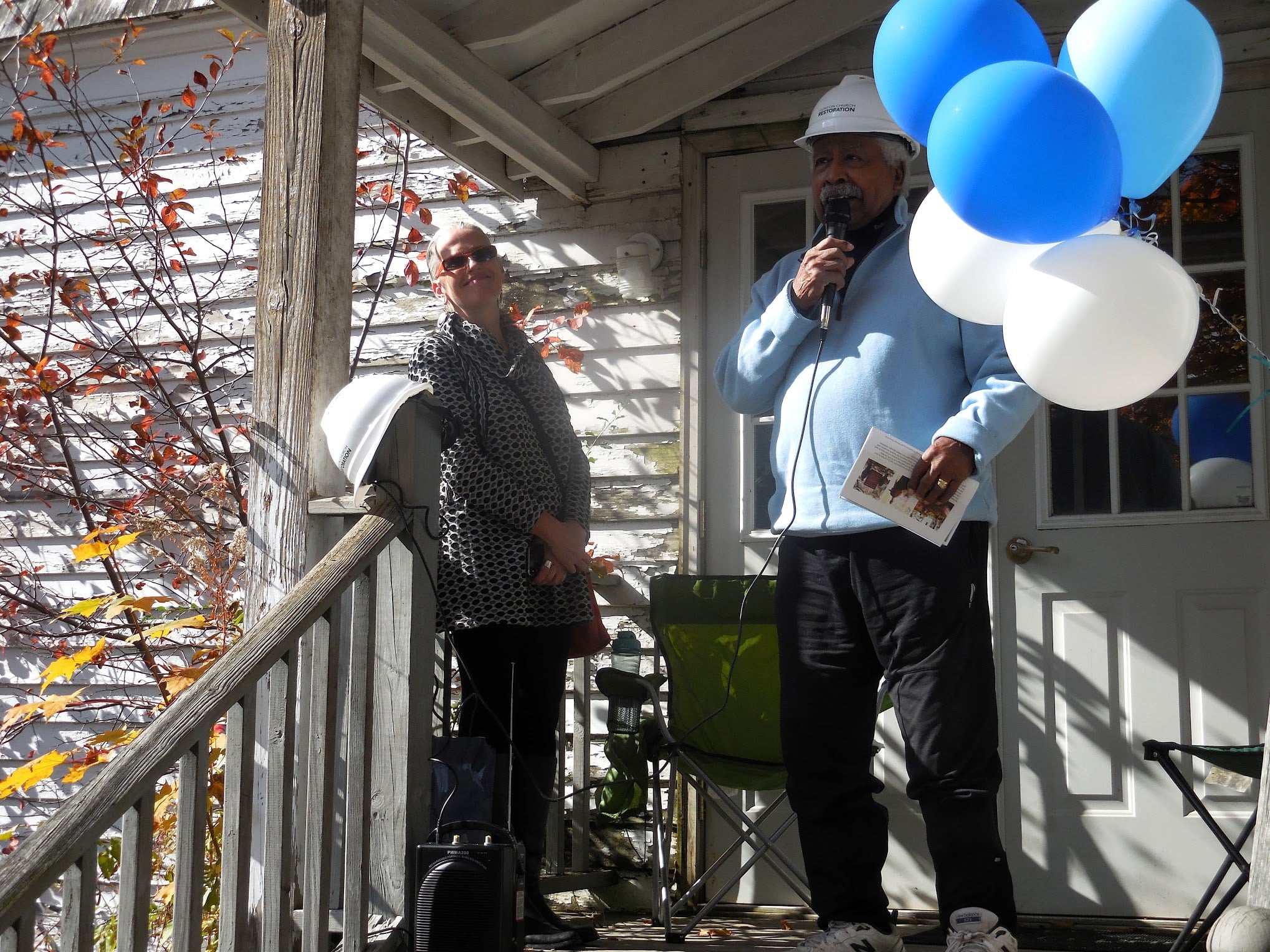 Great Barrington — The Clinton A.M.E. Zion Church restoration effort has now progressed to a significant stage, as key players and dignitaries celebrated the hiring of a general contractor to undertake the first phase of the rehabilitation of the historic place of worship in downtown Great Barrington.

See video below of the speakers at the construction kick-off of the restoration of the historic Clinton A.M.E. Zion Church:

“I think somebody heard that we were going to have this little meeting and gave us the sunshine,” said a smiling Wray Gun, who chairs the nonprofit Clinton Church Restoration and attended the historically African-American church as a child.

At midday Wednesday, about 50 people gathered at the church on Elm Court to hear speakers give an accounting of the history of the church and the efforts to save it after it closed five years ago.

Larochelle Construction of South Hadley has been awarded a contract to repair and replace the roof of the historic church. The firm, which has 25 years of experience that includes historic preservation projects, wood shingle replacement, and work on National Register of Historic Places  properties, will work closely with the project’s design team, led by Huff + Gooden Architects.

Abrahams and Sills thanked the more than 500 donors and volunteers who got the project off the ground and raised the necessary funds to purchase the property, form the nonprofit and secure grant funding and other resources from individuals and the Upper Housatonic Valley National Heritage Area in Salisbury, Connecticut.

See video below of local musicians Pete Wilson and Graham Deane, who provided entertainment at the event. The pair sang “This Little Light of Mine,” a gospel song written for children in the 1920s by Harry Dixon Loes:

CCR was formed in late 2016 by community members concerned about the fate of the church, which had been deconsecrated and put on the market by the A.M.E. Zion Conference.

The church had served as the cultural, spiritual and political home for the African-American community for nearly 130 years, and was vacant and in severe disrepair after closing for good in 2014.

Its early congregation was said to have been a formative influence in the life of the legendary scholar and civil rights leader W.E.B. Du Bois, who returned to Great Barrington to speak in the shingle-style building in 1894. As a child and young man, Du Bois attended services across Main Street at the First Congregational Church.

CCR has received a number of grants since acquiring the church, including:

For a handy guide to Clinton Church’s past and recent efforts, see “It’s Not That Simple: What’s happening with the Clinton Church Restoration?” It’s a biweekly Edge column by Abrahams and Pedro Pechano (co-chair of the CCR building committee) on town issues and is based on their show on WSBS radio. Click here to listen to the Oct. 11 WSBS podcast, on which Sills was the guest.