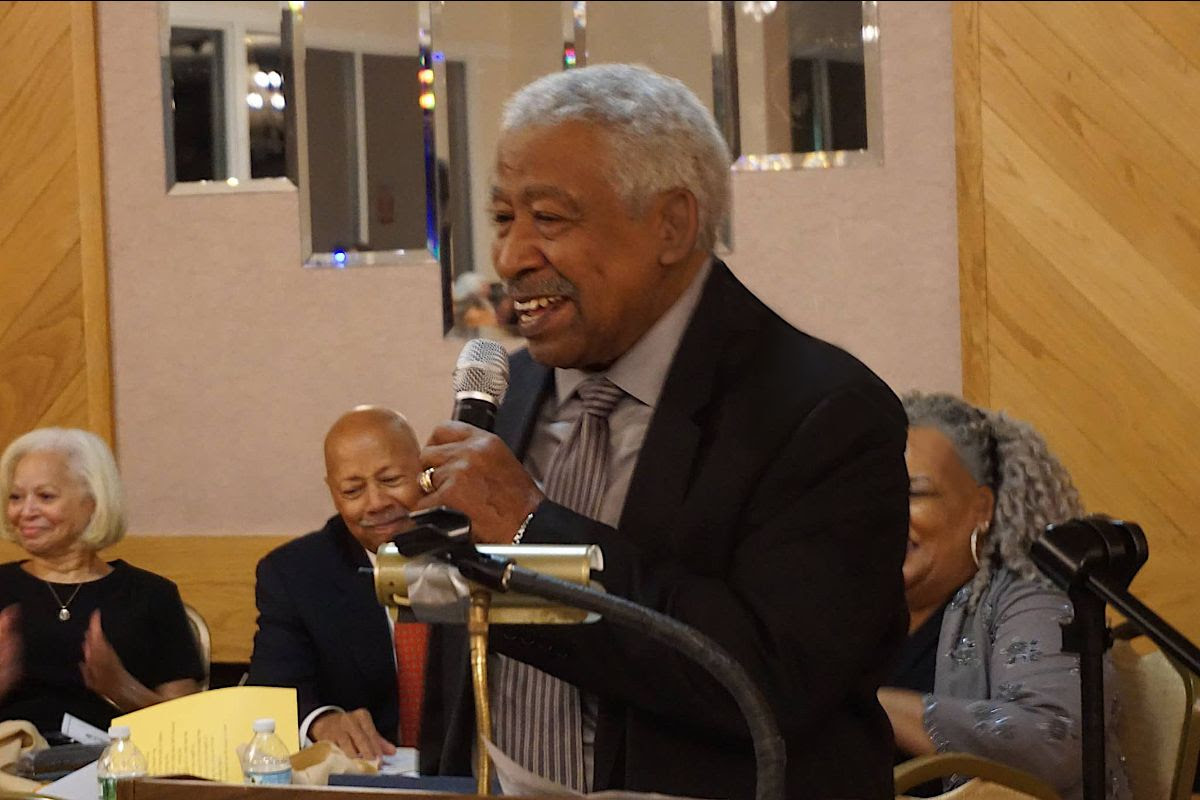 Sheffield — One of Wray Gunn’s clearest childhood memories is of walking to church in Henderson, North Carolina, with his mother and two brothers. “Like the mother hen leading her kids, all dressed up,” he recalled of the quarter-mile journey they made each Sunday morning. When his family ultimately relocated to the Berkshires, the former Clinton A.M.E. Zion Church in Great Barrington was “one of the few, original Black churches in the area,” and the same denomination with which they were familiar. Gunn called it “an icon in Great Barrington,” adding that many Black families who came to the area were looking for church services that were similar to the ones they had left; his deep involvement with the historic church once attended by W.E.B. Du Bois spans nearly eight decades. March 11 marked Gunn’s 90th birthday; his fervent wish is to see his family’s church preserved and returned to the center of community life.

Gunn was born in Atlanta, Georgia, in 1930. His father, David L. Gunn Sr., was born in Stockbridge, where the Gunn family lineage stretches back to the Revolutionary War. “That’s where we started,” he said of the Stockbridge history books from roughly 245 years ago. Gunn’s father ultimately went south to attend school at Tuskegee Institute, where he met his wife, Sinclara Hicks Gunn; they were wed in 1926. Gunn’s aunt, Maude Van Allen, ran a trucking business in Lenox; she fell on hard times following the death of her husband and asked her brother — who had gone on to become an educator in the south, serving as principal at quite a few schools and coaching athletics — to come back north to help her with her business. Gunn can’t recall the exact years but he guesses it was around 1941.

Gunn remembers first moving here and attending school in Lee. “I was very nervous,” he said, at being the only Black student in the class. He and his two brothers, David and Saint — along with another boy named Marshall Fowler — were the only Black students in the school. David, the oldest, was very much involved in sports; he was the first Black student to play on any of the town’s athletic teams — the others were Italian or Polish — and he had a hard time. “It wasn’t outrageous,” but Gunn recalls his brothers getting into lots of fights at school recess. “The way we lived was sort of secluded,” Gunn said of the family’s home on October Mountain and the fact that it took 45 minutes to an hour to get to school every day. “We didn’t stick around in town,” he said, instead remembering doing lots of work on the family farm after school. The family ultimately moved to Stockbridge, when Gunn’s father got a job at Lenox High School as one of the coaches. “This was unheard of at that time,” Gunn said. His father went on to become athletic director at the former Lenox School in 1948, the first Black man to be named to the position at a prep school in the United States. His last position was at the former Cornwall Academy in Great Barrington, where he worked with the school’s founder, John Geddes Moran.

Athletics have always figured prominently in Gunn’s life. He attended the University of Massachusetts and was the first Black athlete to play on and be named captain of the basketball team. After graduation, Gunn “found out [he] was short” and so went into officiating for basketball, baseball and soccer “mainly because I knew how the games went,” he added, noting that most of his assignments early on were to North County, where “the Black population was very sparse.” In the beginning, he recalls not being accepted very well; but the commissioner kept sending him back up, “because [he] was not a ‘homer.’” In other words, when Gunn went to North Adams, Adams or Williamstown, he was not inclined toward the home team — which, in many ways, caused its own controversy. In later years — Gunn officiated for 40 in total — he found that he was accepted as an official and was only being razzed by fans as much as the other guy.

Following Gunn’s retirement in 1995 — he had a career as a chemist with the former magnesium plant in Canaan that later turned into Pfizer — he became more and more involved in community affairs. He has served on the planning board and zoning board of appeals in Sheffield, and as county commissioner for Berkshire County; he’s been in the Lion’s Club for over 40 years; and he’s been a member of the NAACP Berkshire County Branch as well as the UMASS Alumni Club. He and his wife, Cora Portnoff, also do lots of work with the Olga Dunn Dance Company, where Portnoff’s involvement spans 35 years. “We stay busy,” Gunn said of his more than nine decades. “I think things went fairly well for [Wray], but I think that has a lot to do with his personality,” said Portnoff of her husband. She described him as “very energetic, very positive, he’s got a very good speaking voice — when he opens his mouth, others listen — [he is] a very conscientious person, and a very strong family person, and we have a big family.” Gunn has been at the same address since 1953, and for many years, he and Portnoff hosted big Thanksgiving and Christmas dinners at their home. Now, “we’re too old for that stuff,” Gunn joked, choosing instead to travel to see his family on holidays. Gunn attributes the strong voice to the aforementioned officiating — gleaned, perhaps, from “all the yelling and the hoopla.” Gunn remembers saying, “I’ve got the whistle — I make the final decision, so this is it.”

Gunn and Portnoff have been involved in the W.E.B. Du Bois projects in South County for some time. “Early on” they found lots of negative things being said about the scholar, writer and founder of the NAACP “even though he has been an outstanding Black activist whose birthplace was in Great Barrington.” Gunn pointed to Du Bois’ “one little kick where he liked Communism as compared to Segregation.” In working to promote the legacy of Du Bois, Gunn and Portnoff found this to be one of the drawbacks. “We’re still working on that, but it seems to me that the feelings in the local areas have settled down,” Gunn said; “a lot more people are in favor of recognizing the gifts that [Du Bois] gave to Great Barrington,” not the least of which was fighting for justice for all people. “He just had his own way of doing it,” Gunn clarified, citing that, back then, “people didn’t accept because he was Black and shouldn’t have stepped out like [he did]. As we look back, we see that the things he was striving for we are still striving for, even though some of them aren’t coming to pass.” Gunn and Portnoff remain actively involved with Clinton Church Restoration.

The history of Clinton Church dates back to its dedication in 1887. The building itself, a distinctive example of traditional New England shingle-style architecture, closed its doors for worship in 2014. In many ways the iconic bell tower — sheathed in white clapboards but missing a bell — serves as a fitting symbol of the congregation’s purpose, one rooted in the practical allocation of resources that allowed it to become the spiritual, cultural and political home for the African-American community in the Southern Berkshires. The nonprofit CCR purchased the former A.M.E. Zion Church in 2017 — Gunn signed the papers — and remains in the midst of a restoration project aimed at creating an African-American cultural center. “We find that the support, and the interest, now given to this project — as we use the name of Du Bois along with the church — has been tremendous.” Gunn and Portnoff were closely associated with the first female pastor, Rev. Esther Dozier, who was ordained in 2000. “We were very close to her, and she was the one who got us more involved in the Du Bois legacy,” Gunn recalled. “Through [Rev. Dozier], we came to understand her passion to keep that legacy going,” he said. Following her untimely death in 2007, Gunn and Portnoff set their sights on work Dozier had begun: to further the church and keep the legacy going, a legacy of which Gunn’s own mother is very much a part. “My mother was very much involved in the Home Missionary Society,” Gunn recalled, pointing out that she held all of the offices at one point or another; she also represented the church at various conferences and sectional meetings “for a long time.” Following in his mother’s footsteps, Gunn has played an active role in Clinton’s leadership throughout his adult life. The building itself fell on hard times, which, coupled with a dwindling population, forced its closure. “It’s important that the Church be reestablished as a cultural center honoring the people that lived around it and were members,” Portnoff added. “It’s slow,” Gunn said, “[but] if we can keep leading the bulwarks that are in our paths, we’ll make it — we’ll get over them.”

NOTE: The Clinton Church Restoration organization was formed in late 2016 by a group of local community members concerned about the fate of the deconsecrated church. Now a 501(c)(3), the organization’s goal is to preserve and repurpose the historic property as a vital, self-sustaining entity for community use that celebrates and honors the local African-American community; the church’s 130-year history and its first female pastor, Rev. Esther Dozier; and the legacy of Great Barrington’s most famous native son, W.E.B. Du Bois. It is listed on the National Register of Historic Places and the Massachusetts Register of Historic Places. In 2018, Preservation Massachusetts added the church to its list of Massachusetts’ Most Endangered Historic Resources. This unique landmark is a prominent site on the Upper Housatonic Valley African American Heritage Trail. To learn more or to make a donation, visit clintonchurchrestoration.org.